The city of Kranj, with apx 53.000 citizens (data from 2007) is capital of Gorenjska and lies on high rock between rivers Save and Kokra.

Kranj is known for very developed industrie, Iskra, Sava, Tekstilindus, Planika, IBI - unfortunately, many of this companies are closed today.

Kranj is laso known as City of Preseren, because,dr. France Preseren, worked in lived here last years of his life. He died here and is barried in Presernov gaj.

Khieselstein Castle is located in the old part of Kranj, clamped in the town walls on the cliffs from which was in the past monitored the bridge across the river Sava and its nearby surroundings.

It is named by the owner, Janz Khisl, who give tha Castle present form in the 16th century. In the past, there was a glass workshop and shop.

Gorenjska Museum in Kranj collects, conserves and displays culture, which was left to us by our ancestors in Gorenjska.

In the museum there are collections: archaeological, etnologycal, a collection of folk art, old artistic, cultural and contemporary history and modernity, Slovenian cabinet photographs, artistic creativity.

Much attention is devoted to children served by the various creative workshops.

Water tower in Kranj is located near the bridge over the river Kokra beside the road linking the Zlato polje and Primskovo. Water tower was built at the beginning of the century.

In June of 2004 tower blew beacuse of the too much pressure and was repaired and put on his new, beautiful hat. Since the water tower in Kranj has great historic, artistic and architectural importance of the landscape it is registered as immovable cultural heritage by the Ministry of Culture.

The reservoir of water at the top at a height of 43 m has capacity of 250 cubic meters. This was sometimes the water pressure regulator in Kranj and its surroundings, and even today it is still included in the public water supply, providing pressure to the surrounding houses, and serves as buffer for pressure equalization. 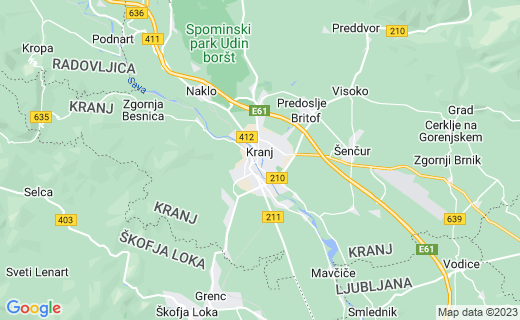