Tourist attractions of Ladakh; the Land of High Passes or Little Tibet in Jammu & Kashmir

A mysterious ride through the remote, cold, desert passes is a hilarious thrill craved by a nature lover. Ladakh, popularly called as Little Tibet is a land of high passes where you may find such a sojourn. The blend of dry views and a cold climate is the exemplary characteristic of Ladakh. Meander through its ways and explore another unique veil of nature to pamper in your memories!

This hub is the third part of the expansion of my ultimate dream vacation in Jammu & Kashmir. Ladakh is a region of India in the state of Jammu & Kashmir that lies between the Kunlun mountain range in the North and the main Great Himalayas to the South. This sparsely populated region is inhabited by people of Indo-Aryan and Tibetan descent. The remote mountainous beauty of deserts with Indus River meandering in between having bright hues sketched in some interior spots makes Ladakh, a truly exotic extravaganza. Buddhist Chortens and monasteries bless the place with a peaceful ambience. The main attractions of Ladakh are:

Ladakh has so many chortens and gompas of Buddhism. The tranquil horizon sometimes gives the perception of the presence of Lord Buddha here.

It is a district in Ladakh spanning a large area with a historical kingdom of Tibet. There are so many attractions in this eloquent region that deserve to be elaborated in another hub. Leh welcomes the wayfarer with

This large valley is formed by the result of the confluence of rivers Shyok and Nubra. Scant vegetation in this region makes way for brilliant color combination of sand and blue waters in the higher altitudes. The Khardung La pass from Leh town is the only way to access Nubra valley. Diskit town in the valley is the main congregation centre of people and has got several Government offices with basic facilities. The 32m Maitreya Buddha statue is the landmark of Nubra valley managed by the Nubra monastery. The secluded valley is serene where another facet of nature is unveiled.

This mountain lake is another distinctive enhancement to the aura of Ladakh. Deep blue water beneath barren hills in snow-covered mountainous backdrop is how Lake Moriri got designed by the eternal hands of God. Rupshu Valley in Changthang plateau is the residence of this lake that has brackish water with marshy lands.

Open only during summer season, Lake Tso Moriri also has several Gompas of which Torzok monastery is 400 years old. Nomadic herders of goats, yaks, and cows live in the lake's vicinity. The diverse fauna of this region is commendable with several species of birds and animals including Tibetan sheep and ass. Camping is allowed here and some tourists would stay here for luring the serene shadow of this remote, cold mountainous belle.

Adding to the placid lakes in the higher altitudes of Ladakh, Pangong Lake stretches from India to Tibet. The Line of Actual Control passes through this lake that is a delicate border point. Situated in the upper reaches of Himalayan ranges, the most interesting feature of Lake Pangong is its ever changing hues. Deep blue water engulfed in dry hills with rocky lakeshores is the usual appearance of this lake. A ramp like formation of land into the lake is another favorite spot of the tourists. During winter Pangong Lake freezes completely despite being saline. But in summer, this long, narrow, enchanted lake is in its sublime glory with ducks and gulls floating over it.

This secluded, sparsely populated region is the neighbor of Ladakh that gets separated by the Zanskar Range. Zanskar is the sub-district of Kargil with its capital Padum. Here, one may come across several Buddhist gompas and Chortens on the rocky mountain ridges. One may feel that the real way to attain salvation is here because of the hefty isolation in the uplands from the outer world of all comfort and company.

The people of Zanskar called as Zanskaris live in villages surrounding the valleys. They depend upon their livestock especially, the yak. Buddhism is the religion of the major population and several monks reside in monasteries. Sani monastery built in a flat plain land is said to be the oldest religious site in Zanskar. Phugtal and Bardan monasteries also have significant historical importance with huge statues and stupas.

This Tibetan Buddhist monastery is situated at Hemis in a magnificent backdrop of rocky mountains. The Ladakhi ruler Sengge Namgyal re-established it that is famous for the annual Padmasambhava festival held in early June. He is venerated as the Hemis representative re-incarnating Sri Buddha. Believed to have been born on the 10th day of 5th month of the Monkey year, he had a noble intention of improving the spiritual condition of all living beings. This day is celebrated every year in the courtyard of the monastery with great ferver. Lamas perform splendid colorful masked dances and plays to the accompaniment of drums and long horns. The Thangka ( Chinese painting) of Padmasambhava, said to be the biggest in Ladakh is displayed to the public once in a cycle of 12 years during this festival.

Hemis National Park, a reserve of the en-dangered snow leopard is also nearby.

Anchored in a hilltop in the Valley of Indus, Thikse resembles most of the Potola Palace of Lhasa and hence called as ‘Mini Potola’. This monastery belongs to the sect Yellow Hat (Gelugpa). Thikse gompa is a massive structure of several buildings in 12 storeys built in the ascending order of their importance. If the foothill buildings comprise of dwelling units, upper roofs house the monasteries and the official residence of the Chief Lama.

Thikse gompa also has a wonderful stock of Buddhist art. The Stupas, statues, Thangkas and wall paintings catch our attention with their elegant dexterity. A 15 metres (49 ft) high statue of Maitreya, covering two storeys of the building is deified in the monastery. A nunnery is also part of the complex.

Thikse celebrates Gustor festival in the ninth month of the Tibetan calendar during which special mask dance, Cham dance is performed.

This is another Buddhist monastery in Leh district that was the residence of Ladakhi royalty once. Stok gompa has a notable library including 108 volumes of Kangjur (a loosely defined list of sacred texts of various sects of Tibetan Buddhism). A ritual dance-mask festival is held annually.

Owing its inception to Od-de, this monastery contains about 100 monks and a giant statue of Devi Kali. Devi is unveiled during the annual Spituk festival that is held during the eleventh month of Tibetan calendar.

Do you like this cold desert Ladakh? If yes, would you love to visit the Buddhist gompas?

This temple of Sikhs is dedicated to the founder of Sikhism, Guru Nanak. It stands at a place where it is believed that he vanquished a demon while meditating. Albeit Buddhist pre-dominancy in Ladakh, Gurdwara Pathar Sahib is worshipped and venerated by Tibetan Buddhists in the name Guru gompa Maharaj and Nanak Lama. The temple is now maintained by the Indian Army. It has become a tradition for vehicles passing by to stop and pay homage to the sacred Guruji in this beautifully built temple on rocky hills.

Ladakh, the land of high passes can be another beholding sight in your souvenirs. This cold, secluded, barren upland has a mysterious story to tell the daytrippers with a twist of suspense always. 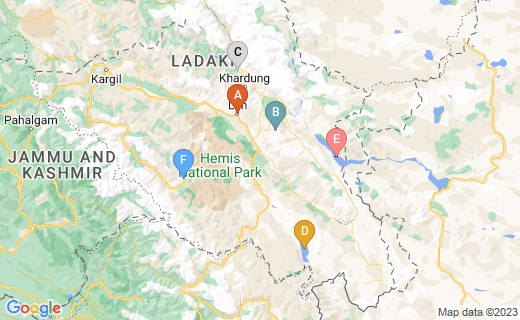