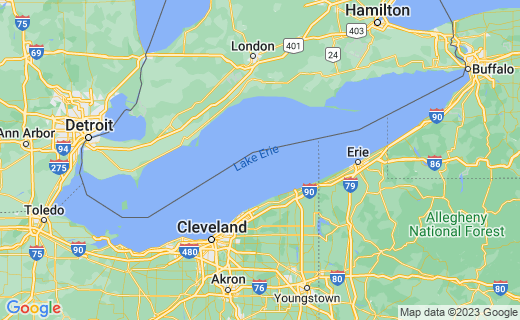 This part of the Circle Tour is called the Erie North Shore Tour and the Wine Trail Tour, the latter because many vineyards thrive here in Southern Ontario.

Dozens of varieties of red, green, black, and purple grapes cover vines throughout the North Shore drive and are brilliant to observe on your tour of the area. Several vineyards sponsor wine tasting and tours, sometimes called grapevine tours. At least 11 local vineyards are active, with two additional related attractions to enjoy along the North Shore.

During wintertime snows, grapes are grown for icewine, an Ontario specialty wine made from grapes left to freeze naturally on the vine. This is a particularly good reason for visiting the Erie North Shore. Crops must be picked at once when they have frozen, in just a few hours, or they are lost. The resulting wine is sweeter than other dessert wines, because the frozen water comes out in the processing, leaving a richer grape concentrate for fermentation.

The pioneers of icewine production are located north of Lake Erie at Lake Ontario, as seen in the map below. 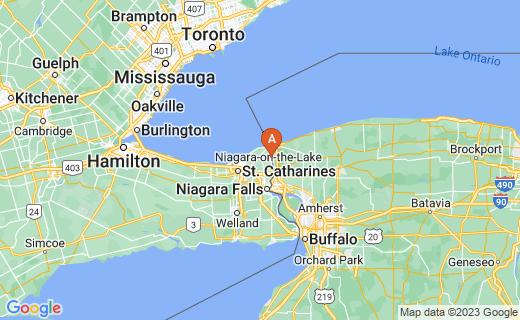 Southern Ontario is known for grape and wine tours, icewine, glacial groove sites, preserved shipwrecks that include those from the War of 1812-1814, beaches, and family attractions.

The Artwork of Glaciers

Lake Erie was gouged out of the ground long ago by a glacier that left a jagged line of islands in the middle of the lake from Port Clinton to Leamington, Ontario. From an aerial view, you can see jagged edges of the cut along the perimeters of the islands.

Ferry boats used to carry cars, bicyclists and foot passengers back and fourth the lake, but wreer eliminated. One route that does operate is that between Leamington, Ontario and Sandusky, Ohio. This is a wonderful opportunity for travelers.

Proponents for restoring ferries in Lake Erie are active in lobbying for legislation to do so, and perhaps we will enjoy those new trips in the 21st century.

Glaciers Made the Lake

This freshwater lake was dug from the ground by advancing and retreating glaciers as the Earth survived ice ages and thaws. Larger lakes existed for a time where our Great Lakes now exist as ice melted, and these lakes had names like "Lake Iroquois." 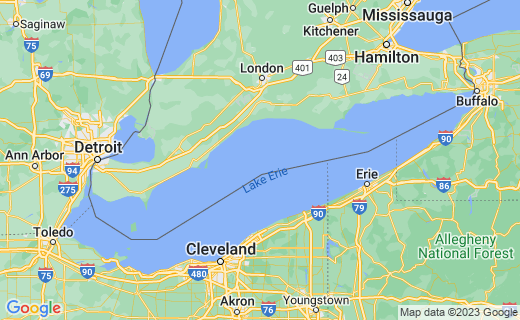 Some of the 2,000+ shipwrecks in this lake, dating from the 1600s to the 1950s, their captains, their crews, and their passengers have not yet been found. Many others are preserved for visitors to view beneath the surface of the waters. Plan to visit them before making your trip around the lake.

I have found the book Shipwrecks of Lake Erie:: Tragedy in the Quadrangle helpful in understanding what I am looking at when i visit shipwreck sites and its illustrations and maps are excellent. 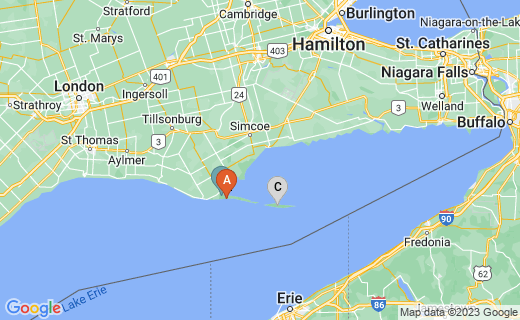 Some Shipwrecks Sunken in Lake Erie

Shipwrecks of Lake Erie: Tragedy in the Quadrangle (Disaster)
Published in 2014, this book with its mapos and illustrations convinced me that more shipwrecks occurred in Lake Erie than in any of the other Great Lakes. Having visited sunken ships in Bay City, Michigan as well, I find the Lake Erie structures breathtaking and mysterious.
Buy Now

In America, Begin Your Tour in Michigan

Beginning from the Michigan end of the lake, you can visit several interesting cities and then cross over into Winsdor. 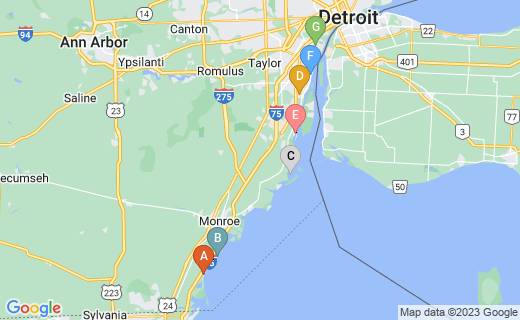 Luna Pier - The pier in this town is crescent-shaped and concrete, 800 feet long and reaching 200 feet out into Lake Erie. The Toledo Harbor Light is nearby and visitors to this area enjoy fishing, biking, boating, and beach activities. The annual Bootleggers & Blues Festival is on the 3rd Saturday in July.

Pointe Mouillee State Game Area - This is a hunter's and trapper's delight during various hunting seasons. but birders enjoy hiking and many varieties of birds and other wildlife. Canoeing and kayaking are big attractions, as are the biking and jogging trails.

Gibraltar and Taylor Michigan -- This area and Mt. Clemens, Michigan are home to the Gibraltar Trade Centers, which are the largest indoor-outdoor flea market/trade shows I have ever seen. Open every weekend:

Most of the cities on this route are home to historic buildings and other interesting sites as well as bed and breakfasts and amusements.

Detroit and Crossing into Canada

Detroit is filled with attractions and sits on the Detroit River that connects with Lake St. Clair.

Crossing the American-Canadian border bridge or tunnel into Windsor begins the Ontario side of the Lake Erie Circle route, where the ambience of the landscape changes. Greater Detroit is urban, whereas Ontario is rural and open all along the north shore of this Great Lake.

The Ambassador Bridge is a private-owned toll bridge at this time, with a government owned bridge in the planning stages in the mid 2010s. Avoid the gasoline stations at each end of the bridge, because of problems with false postings of octane levels in the recent past. In addition, although the per-gallon price is a little lower for the consumer, the station owners receive a discount of 60 cents per gallon on taxes.(Reference: Bell, Dawson "Tax-Free Fuel Sales Are Bonanza for Ambassador Bridge Owners". Detroit Free Press; April 25, 2011. Retrieved June 28, 2016.)

Why not fill up at your favorite gas station on the American side before approaching the bridge and the tourist-trap gasoline action?

The Detroit-Windsor Tunnel and is owned by an insurance company that leases it to Detroit. It is lust under a mile in length and its toll is $4.25 if you use your smartphone to pay - cheaper than the $5.00/car charge on the bridge. 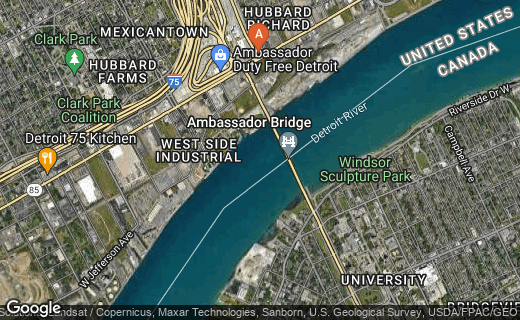 The Long and the Short

Driving past Detroit's Ambassador Bridge on I-75 and Route 23, it looks very large and long, but it is not. It is 1.4 miles long (and not all of it over water), as opposed to Michigan's Mackinac Bridge that is 5.0 miles long. 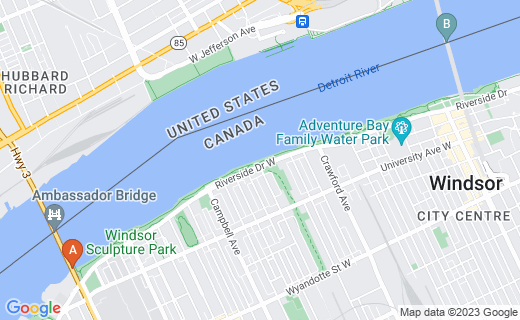 Ontario Side of Lake Erie

Ontario Province is located in east-central Canada. Its name comes from the Native North American Iroquois word for "beautiful water." 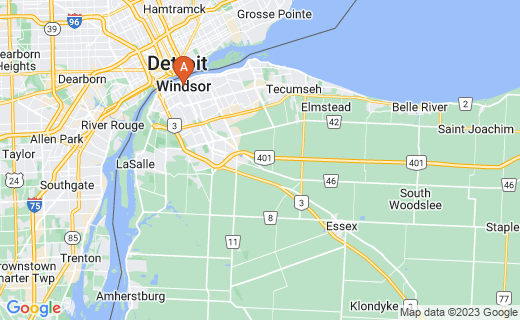 The route to travel completely across the Province of Ontario across Lake Erie is Provincial Route 3. However, automobile GPS systems often route vehicles to the bridge at Lewiston-Queenston instead of the Peace Bridge.

Canada Highway 3 connects Windsor on the west and Fort Erie on the east across approximately 250 miles or 400 kilometers along three major sections of thruway that offer bypasses around the smaller towns. Blue and white lake erie Circle Tour signs mark the route.

On the Ontario side of Lake Erie, one finds many primitive and more developed beaches to enjoy, along with vineyards, farms, bed and breakfast establishments, retreat houses, parks, marinas, a yacht club, and a few golf courses.

Pelle Point National Park is a good place to stay for awhile and a ferry service is located nearby fort visiting Pelee Island vineyards. . 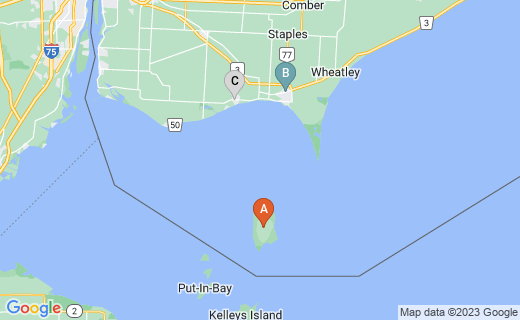 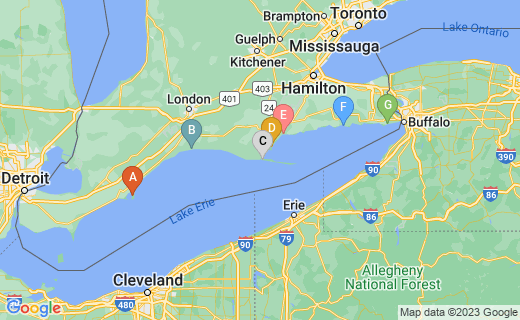 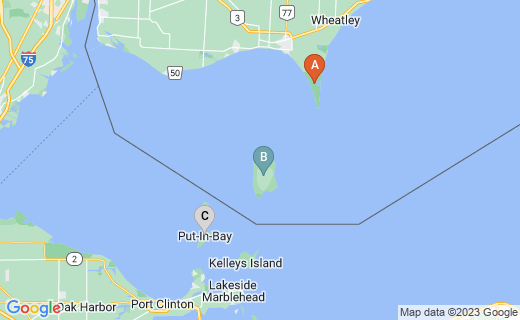 The sites pointed out on the map featured above show where the first commercial ship-to-shore message was broadcast and received. Private for-profit wireless communications, like those advertised by the humorous Verizon tagline, "Do you hear me now?" had their foundation right here.

Lee de Forest (August 26, 1873 – June 30, 1961) was an American inventor with over 180 patents to his credit. He named himself the "Father of Radio," with this famous quote, "I discovered an Invisible Empire of the Air, intangible, yet solid as granite,"

Commercial radio history was made in 1907 in this island group in the Canadian waters of Lake Erie.

On the 18th day of July, Dr. Lee deForest broadcast the first ship-to-shore radio message from a steamer yacht called Thelma. His message was fast, clear, and well understood, relaying the race results of the 1907 Annual Inter-Lakes Yachting Association Regatta. It was all a big event!

The doctor's assistant Frank Butler, from Monroeville across the border in Ohio, stayed in the pavilion of Fox's Dock at Put-in-Bay, which is the Jet Express launch now. He heard the transmission from the Canadian side of the lake via the doctor's invention that used a vacuum tube and which he named "radio."

This event led to the development of commercial radio and television well before the mid-point of the 20th century... and this led to soap operas!

Continuing on Canada Highway 3, you will find many agricultural and pastoral settings that offer relaxation, bed and breakfasts, and wine-and-grape tours. 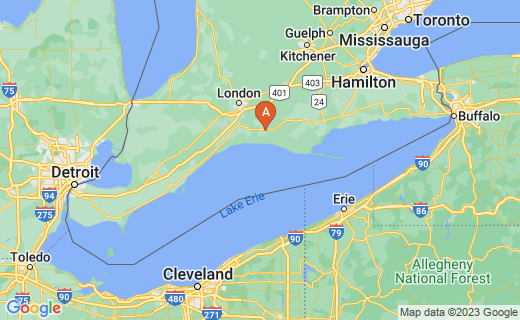 Near the Ontario-New York Border

Fort Erie - Here we find both a fast growing Ontario City in the Niagara Region and a National historic Site of Canada in the form of an old fort famous in the war of 1812 - 1814. Reenactors resurrect battles for guests often at the fort complex. The fort is an old star-shaped fort like fort Orange in New York.

Peace Bridge - This bridge spans 3,800 feet from Fort Erie to Buffalo. The toll is 3.00USD or 4.00CAD per car, but walking and riding a bicycle across the bridge are free. make sure to visit the First Nations archeological area preserved for history as well as for view by tourists.

Be Careful With Your GPS!

The route to travel completely across the Province of Ontario across Lake Erie is Provincial Route 3. However, automobile GPS systems often route vehicles to the bridge at Lewiston-Queenston instead of the Peace Bridge at Fort Erie and Buffalo. 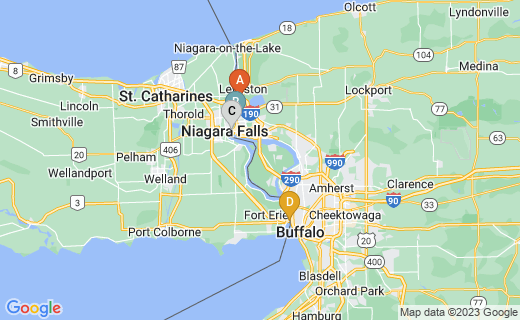 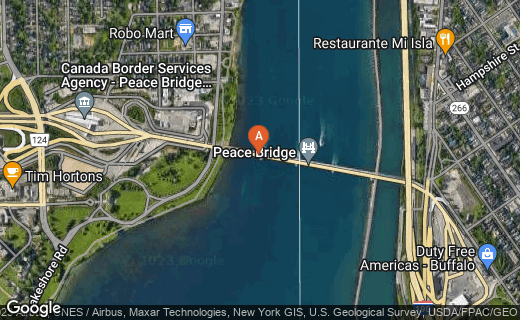 Mewinzha – A Journey Back in Time presents an interesting archaeological and cultural exhibit in the atrium of the administration building of the bridge in Fort Erie. It is the excellent cumulative result of efforts by the following partner agencies: the Town of Fort Erie, the Fort Erie Native Friendship Centre, Fort Erie Museum Services, and the Buffalo and Fort Erie Public Bridge Authority.

Peace Bridge Archeological Site has been studied and reported in a 556-page document by ASI company, ARCHAEOLOGICAL SERVICES INC . Their historic project at Peace Bridge is located under the plaza in Fort Erie and honors several First Nations/Native North Americans:

From Canada to New York

Buffalo, Stateside of the Bridges from Canada 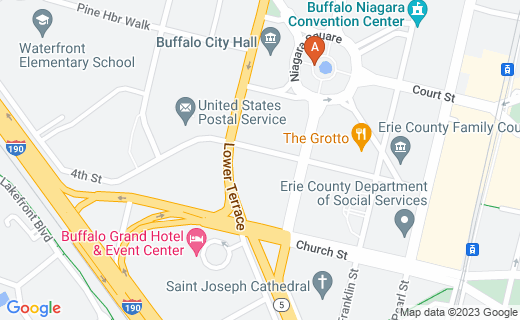 If your wish to continue your circle tour thr9ough New york and Pennsylvania, many wonderful places await your visit. Thereafter, you might consider the Ohio Side of the lake tour.

Take State Route 5, the Buffalo Skyway, though New York and stop at:

Buffalo - You could spend at least a week here. This city offers so much to see ans do that you might even want to take a job there.

Evangola State Park - This extremely clean and well maintained state keeps an active park staff at Lake Erie Beach. They give presentations about local shipwrecks and famous area storms, narrating the accompanying superstitions and singing the songs related to the wrecks and their heroes. Visit the park at 10191 Old Lake Shore Rd, Irving, NY 14081.

Continuing on NY Route 5, you sill find many spectacular views of the lake and pass through small towns and camping areas. If you take the tollway I-90, you will see see the views of the lake. Sport fishing charters are available in Westfield .near the Blue Water Beach Campground.

Ottoway Park and Kampgrounds of America (KOA) make a large green space to visit for relaxation before crossing over into Pennsylvania on PA State Route 5 for the southern shore of Lake Erie. First, stop at the Hot Dog Hutt and Putt in Ripley for mini golf with some great hotdogs. 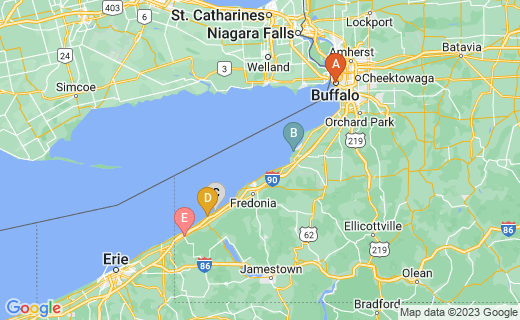 Have a joy filled Lake Erie Circle Tour, no matter what side you take!