The Languedoc Roussillon stretches from the Spanish border across the Mediterranean coast to the Camargue in the East. The diversity of the landscapes is amazing: from the dramatic peaks of the Pyrenees, to the rugged Cévennes National Park, long sandy beaches, and many rivers and canals such as cruising along the Canal du Midi are just a few highlights!

The Languedoc Roussillon region is split into smaller areas called departments: starting on the Spanish border: the Pyrenees-Orientales, moving north into Aude and then onwards into Herault. Further north-east on the coast and moving inland: Gard, and finally Lozere with the Cévennes National Park and the Gorges du Tarn (a massive 25 mile grand canyon).

Each department has its own tourist board who will be able to suggest places to stay and visit:

Some places to visit: the Little Yellow train from Villefranche de Conflent to the highest station in Europe at Bolquere (foothills of the Pyrenees), the picturesque port at Collioure, Perpignan, the World Heritage site: medieval castle at Carcassonne, Canal du Midi, Beziers on the river Orb, modern Montpellier (but still with some Roman architecture), and Mende - not to mention all the beaches, vineyards, sea lakes, and lovely sleepy villages with cafes and bars.

Many property buyers love the Languedoc-Roussillon too! Property in Languedoc-Roussillon is cheaper than its rich neighbour Provence Alpes Cote d'Azur. Away from the coasts, property in the villages is much cheaper, and the landscapes can be spectacular. Studios and Apartments are available on the many marinas but during the off season can be very quiet.

Weather: The region is renowned for its dry and warm climate throughout the year especially for its mild winters and really hot summers. Languedoc Rousssillon benefits from 2,506 sunshine hours a year. 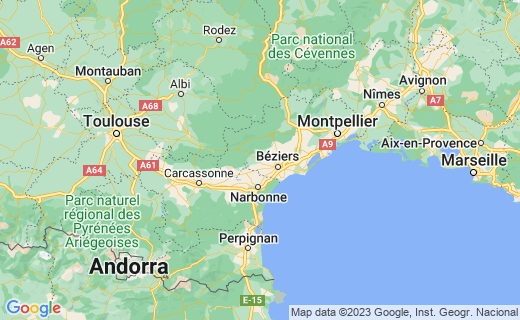 Get a flavour of the diverse landscapes across the Languedoc-Roussillon region - take a tour with the video below ......