It might surprise that visitor who is rushing to catch a ferry, or to leave en route for warmer areas in France, that Le Havre is fascinating in its own right, considered a prime example of town planning.

I was another of those travellers in a hurry for many years. Le Havre was our port of choice for returning home to England from Paris during our years there, but one Sunday we arrived early. It was quiet, so I took advantage of the spare time and went for a wander around to take some photos.

During those years of rushing through, I had been taken by the tall spire which rose above the skyline and so finding it was my main focus. I found other points of interest as you will see but never did find the other feature of the view, the smaller building rising above the skyline. I have since discovered that it's the bell-tower of Le Havre Cathedral. It dates from the 16th century and is one of the very few buildings to survive through the war from earlier times.

The position of Le Havre 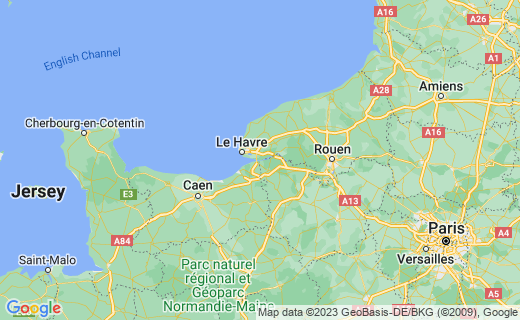 As you can see from the map, Le Havre is not so very far from Paris. I used to count on roughly 2 hours from where we lived on the western outskirts, but I know some people who can do it in less! I probably wouldn't advocate a special trip all the way from Paris unless you are a dedicated World Heritage Site visitor, but if you are visiting Honfleur it would be worth a detour, as they say. Just pop over the Pont de Normandie and there you are.

Why Le Havre was rebuilt

The other notable point about the position of Le Havre is that it is a short distance across the English Channel to England and the United Kingdom. In 1940, after the outbreak of World War II, the Germans set up a base in Le Havre with a view to invading Britain.

Needless to say, the Allies started bombing Le Havre which was completely devastated by the end of the war. Over 12,000 buildings were destroyed, the port was demolished and ships deliberately sunk. It was liberated in September 1944.

After the war in the spring of 1945, Auguste Perret was given the task of rebuilding Le Havre. He wanted to reconstruct the whole area in concrete along right-angular lines. The reconstruction was not officially declared finished until 1964 and not until 2005 did UNESCO deem it worthy of being included on the list of World Heritage Sites.

I was short of time and it was a Sunday, so I was limited to seeing just a few of these, but it was still worthwhile. As far as I'm concerned, a return visit is a must.

The only two buildings designed personally by Auguste Perret are St Joseph's Church (above, top), which dominates both the town and the sea, and the Hôtel de Ville (above,lower) which is less easy to spot so you may have to search out.

The church spire is 107 metres high and illuminated at night which makes it a beacon seen from the sea. Because Perret was an atheist, he wanted it to be created as a memorial to the tens of thousands killed during the war, but Raymond Audigier who collaborated in the design wanted it to be a candle of thanks to God for the return of peace.

Perret's collaborator in the design of the Hôtel de Ville was Henri Tournant. The beautiful gardens in front were also part of this design.

Near to the church and faithfully following the principles of Perret's design is the Collège Raoul Dufy.

It consists of several buildings surrounding a sheltered courtyard. It demonstrates Perret's influence:

A collège in France caters for the age group 11-16 years old.

On a side note, if like me you wonder who was Raoul Dufy, the answer is that he was a French artist born in Le Havre. One of his more well known works is La Fée Électricité or the Electricity Fairy. This is a fascinating work of art bringing together art and science.

The so-called monumental triangle is based on three roads and reaches from the gardens in front of the Hôtel de Ville towards the Porte Océan via the Rue de Paris, the Boulevard François Ier, and Avenue Foch. There are 28 points of interest along the route. You can do it yourself or take a guided tour starting from the Hôtel de Ville.

A much more recent but now famous (or infamous) building is the Volcan, so named because of its shape. It was designed by the world renowned architect, Oscar Niemeyer whose best known work must be the Cathedral of Brasilia.

Images of the rebuilt Le Havre In Perret's words, "I see a waterfront that would bring together all the monuments of the city and would escort ships until they arrived in port. Tall towers would house the offices of major shipping companies, traders, industrialists. They would rise well above the houses in the city, which would not exceed 5 or 6 floors."

I think his his vision has been realised although he didn't live to see it completely fulfilled.