The 'town square' of Legacy Village

Legacy Village, a lifestyle center that opened in Lyndhurst, Ohio, an eastern suburb of Cleveland, in 2003, occupies a modest portion of what was once Franchester, the wooded park-like estate of renowned United States congresswoman Frances Payne Bolton. Remaining portions of that estate are occupied by the private Hawken School and the former headquarters of TRW, Inc. (now devoted to various offices of The Cleveland Clinic).

The architecture of Legacy Village is heavily tricked out with offsets, material and color changes, ornate details, pseudo-French Normandy influences, and gingerbread embellishments with a gentrified upscale visual appeal. The end result is a somewhat haphazard, though picturesque, effect. However, the ‘anchors’ of Crate & Barrel, Cheesecake Factory, The Capital Grille, Giant Eagle, and Hyatt Place each depart from the village style to assert their own individual identities. To make the parallel-parked interior streets more tolerable to both auto and pedestrian throughout biting Cleveland winters, pavements are heated to melt fallen snow and ice. 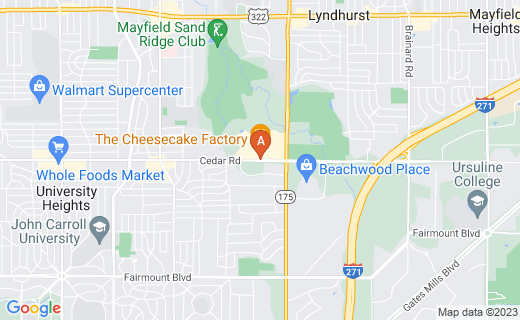 Check out the remaining structures of the historic Frances P. Bolton Estate — several cottage-type buildings at the eastern end of Legacy Village.

While Legacy Village draws from a significant and fairly affluent trade area to its east and southeast, it also competes with the nearby La Place boutique center and Beachwood Mall, both in adjacent Beachwood, Ohio, as well as Eton on Chagrin, a mere few miles away along the interstate, and Pinecrest, just recently opened at Harvard Road and Interstate 271 to the southeast. And, while the lifestyle center clearly offers attractive retail options for area residents, there are many who miss the unspoiled and wooded pastoral beauty of the former Bolton Estate, and rue the significant traffic congestion occasioned by the project.