Things to do in Leipzig: Notenspur music trail

Kymberly moved to Leipzig in 2011, and loves the music, arts, old buildings and wildlife in the 'little city' (small compared to Melbourne).

The Leipzig Music Trail (Notenspur) was established in 2012 to celebrate the rich history of Leipzig's classical music scene.

Originally proposed as an UNESCO initiative to acknowledge Leipzig as a historical music city, the Notenspur project has grown to include two short walking trails, and one longer cycling trail.

Metal ribbons indicate directions in the pavements along the trail.

Many famous conductors, composers and musicians have called Leipzig home over the years, including Wagner, Bach, Mendelssohn, Schumann, Mahler, Grieg, Janáček, and many more.

Bach and Mendelssohn taught and performed for many years in Leipzig, and both are remembered with museums and festivals, as well as with music schools in their names.

Designed by Rudolf Skoda, the hall was tested by the army during construction, firing weapons to test the maximum acoustics. The Concert Hall has a massive 6638 pipe Shuke organ, inscribed with the orchestra's motto (True pleasure is a serious business):

The Leipzig Gewandhaus Orchestra, established with a small group of 16 musicians in 1743, was most famously conducted by Felix Mendelssohn from 1835 until his death in 1847.

The orchestra has performed premiers of many famous works, including:

With over 200 recorded CDs, the Gewandhaus Orchestra also performs regularly with the St. Thomas Boys Choir and with the Leipzig opera, and has performed almost 100 New Year's Eve concerts.

The MDR cube, attached to the concert hall, is used for rehearsals and recording.

With its own symphony orchestra (once conducted by Richard Strauss), plus adults' and children's choir, the groups perform regularly, tour locally and internationally, and have a hectic CD and radio recording schedule.

The Leipzig Opera was founded in 1693, but has moved halls multiple times. Georg Philipp Teleman composed and directed many operas during his time at this stage, which later featured famous such conductors as Arthur Nikisch and Gustav Mahler.

The bust of Wagner survived the destruction of 1943, and stands in the foyer of the New Leipzig Opera, which opened in 1960, built on the site of the previous theatre. The earliest built sections of the St. Nikolai church were completed in 1165, but the church has been extended multiple times since then. St. Nikolai is closely linked to St. Thomas, and holds many concerts, including Bach organ and choral works.

The first performance of the St. John Passion by Bach, was on Good Friday in 1724, in St. Nikolai, by Bach himself.

Built in the early 1200s, St. Thomas contains 2 large organs, the first of which (the little organ) was built in 1489. The larger organ was first built in 1511, but it was later upgraded. Mozart performed on this organ in 1789.

The St. Thomas Boys School and Choir (Thomanerchor) were established 800 years ago, and were led by Bach from 1723 until his death in 1750. Because of his long and close connection to St. Thomas, Bach is buried in the church, and you can visit his grave. Opposite St. Thomas Church is the Bach Museum and Archive, featuring permanent exhibitions about the life and work of Johann Sebastian Bach.

The museum houses original manuscripts, instruments and paintings, as well as special exhibitions, especially about his teaching and performances with St. Thomas.

The building also houses research groups and a library dedicated to everything and anything about Bach. With regular concerts around Leipzig throughout the year, a yearly festival and biannual competition, the Bach Archive sponsors many musicians, especially organists!

Carl Traugott Queisser, who was a trombonist, violist, violinist, and musical leader during Mendelssohn's time in Leipzig.

This is the last surviving home of Felix Mendelssohn Bartholdy.

Although he was appointed musical director of the Leipzig Gewandhaus Orchestra in 1835, and regularly performed in the Concert Hall and churches, Mendelssohn did not move to Leipzig until 1845, and remained in this house until his death in 1847.

Meldelssohn house has been restored as a museum, and with conductor Kurt Masur, offers piano and chamber music masterclasses (by invitation and application). Concerts are held in Mendelssohn House's music salon regularly.

For the first 4 years after marrying, Robert and Clara Schumann lived in Leipzig, while performing, studying, and teaching.

The museum has restored the original living quarters and study area, and is attached to an elementary school, with a focus on music and the arts.

Schumann's Piano Sonata No.2 in G minor was featured in Nodame Cantabile, and other pieces by Schumann were featured in Piano no Mori and La Corda d'Oro, three fabulous anime series about music students.

With over 5000 instruments, dating from the 1600s, and interactive exhibitions, this museum fascinates children and adults alike. Originally opened in 1886, the collection of instruments now belongs to the University of Leipzig.

Permanent and special exhibits feature a range of instruments from Europe and the world, and include one of the oldest original pianos, built in 1726 by inventor Bartolomeo Cristofori. 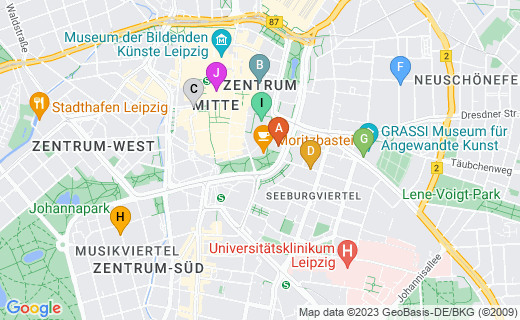 Students regularly perform around Leipzig as soloists and in various ensembles.

Leipzig University and the Paulinum Church

Several famous musicians, composers and conductors studied and taught at Leipzig University, including Telemann, Wagner, Hiller and Schumann. The university has its own symphony, smaller ensembles and choirs, adding to the music tradition surrounding Augustusplatz.

Mendelssohn's funeral was held in the old University church, which was later destroyed. A small chapel is integrated with the university building in a stunning, modern glass design.

There are a number of monuments and meeting points around the city, dedicated to its famous musicians and composers. 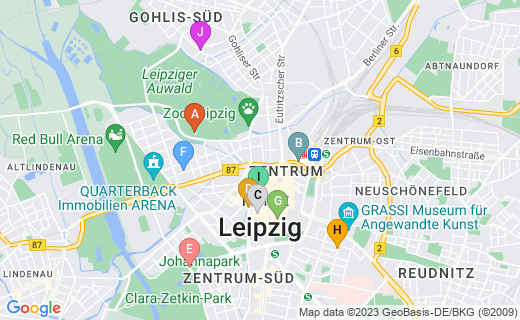 Leipzig has it's share of non-musical sights and attractions.

One of the best is the Leipzig Zoo - a fantastic one or two day trip for adults and children, and a world leader in protecting and breeding endangered species.

Packed with exotic and endangered animals in wide (and often shared) enclosures, glass and open-air viewing areas let you get up close and personal with the animals.

The Zoo is continually expanding, the newest addition being the huge tropical Gondwanaland enclosure. Development is beginning on the new South America extended exhibit.

Who's your favorite classical composer?