On a recent trip to France and being driven along the D 933 towards Auxi-le-Chateau, I saw something behind some large gates which made me call out to my partner. Please stop the car, I said, I would like to go back and take a look at something.

With a resigned sigh, he turned the car around and drove into a side street where we found ourselves parked beside a war memorial. It stood proudly next to the beautiful little church. The doors of the church we found to our disappointment were shut tight.

Wandering into the church garden it was immediately apparent that this was no ordinary church garden. It had been tended with such loving care that it made it stand apart from any others we had previously seen.

It simply beckoned us in and it was then I saw a little walled path, lined on each side with herbaceous borders so we followed it, for I could see that it was going in the direction of the large gates which I had seen earlier.

At the end of the path, we found ourselves standing on thick green grass beside the main road which rums through the village of Mazicourt.

Planted along the street were wide herbaceous borders, seemingly planted by the same person who had tended the church garden and the little walled walkway.

Then we find ourselves standing before the large gates which had earlier so attracted my attention. Stood behind the gates and set back stood the Chateau. It was so understated and so very beautiful, though it was not this which had first attracted my attention, for behind the gates, there was an extraordinary garden, a Potager or kitchen garden so lovingly laid out and filled with an array of plants.

We could see borders of flowers sheltering beside red brick walls, presumably to be used as cut flowers for the chateau, perhaps even for the church in days gone by. There were large flowering dahlias, lavender, herbs, fruit trees, berries and vegetables.

Butterflies and bees flitted from flower to flower. The pears trees were planted as low growing espalier hedges, all stood at about waist height. A child could easily have plucked a pear without even raising their arms! It was simply stupendous.

We stood and admiring the scene for a while and then I began walking alongside the huge wall which featured masses of ivy growing on it. I looked up and saw a small framed blue leaflet pressed up against the wall. It was slowly being covered by the ivy growing there.

My curiosity turned into delight as I read it, for it appeared that the garden was open to the public but not on this day! We learned from speaking to a neighbor that it would be open the following afternoon, if we would like to come back again she said we could then view the garden! Was she kidding! Nothing would have prevented us from coming back.

And so, we returned to the village of Mazicourt and once again and we parked our car alongside the War Memorial next to the little church and followed the path through the churchyard, the garden so lovingly tended - but the building no longer open to the public! I would have loved to venture inside.

A local had mentioned the previous day that it was ‘fini’- but clearly this Church has not been forgotten and never will be, for just so long as those loving hands are still here to tend the garden.

At the entrance we walk tentatively down the pebbled path. We see a slim blonde lady with a fork in her hand tending the garden. She is wearing a green apron and is so completely wrapped up in what she is doing, that she is so totally unaware of our presence.

Then she walks away around the corner. We follow her and this is where we discover the reception area and this is where we are met by Catherine Guévenoux, the lady in the green apron. This lovely bubbly blonde lady is the creator and owner of this spectacular garden. She tells us that we have 10 hectares to explore and that we should just take our time and enjoy looking around her garden. Ten Hectares! We are surprised.

We pay our admittance fee and she hands us a map of the garden. There are no signs or labels anywhere to be seen in the garden. We feel instantly at home. We have the garden to ourselves for most of the afternoon, we only saw two other people in the time we were there.

It seems that Catherine Guévenoux and her husband, purchased the then neglected 18th Century brick and stone chateau at a public auction in 1989. With the house came 10 hectares of uncultivated land, so whilst the house was being renovated she began landscaping the garden. In a relatively short time period of time she has lovingly created an award winning garden which became the treasure of the Tourist Board and Catherine was persuaded to open the garden up to the public in 1997.

It is made up of a succession of themed gardens. Each one reflects the personality of its creator. It is sophisticated and also incredibly relaxed with some features which can’t help making you smile at their ingenuity. It features ideas which have been so clearly inserted to amuse and give pleasure to children and adults alike. It is both French and English at the same time.

There are abundant places to just sit and relax. You will meet farmyard animals, birds and free range chickens. These roam roam the tapestry of green lawn, alongside Catherine as she tends her garden.

There are orchards filled with abundant pears and apples - the fruit so large and tempting that it is hard to resist the urge to pick up a wind fall. In my mind I could almost taste the pear juice dribbling down my chin. I could imagine little children climbing the trees and eating the fruit as I once did as a child, right up there in the safety net of the bows of the fruit trees.

We discover meadows and are met by sheep, cows, chickens, geese, turkeys and even bantams. We discover arbors which represent the traditional style of building in Picardie and within these buildings we see grass mats which line the ceilings. High up in the rafters are small stuffed birds and tiny carefully placed nests to amuse children. In each arbor we find seats on which to sit and even a rustic hand crafted chair. There is so much more for you to discover at Les Jardins de Maizicourt, it deserves to be on your wish list of gardens to visit in France. I hope this will inspire you to visit soon.

The garden can only be described as utterly charming and very beautiful. It is quite the nicest garden I have ever visited. Now I will have to go back and see it in all its seasons! I hope you will too.

The entrance is in the style of a Japanese garden. It is planted with wild cherry trees, bamboo and conifers, The little curved invites you in and begs you to walk down the little curved path and around the corner but before you can get there you will see a doorway where a terracotta man guards the entrance to the toilets. There are several interesting artifacts placed around the room.

In the entrance you will find:-

The chateau was built of brick and stone for Louis-Francois de La Houssoye-in the first half of XV111e century. The arms of the pediment were added in X1Xe

A Tapestry of Green The Potager or Kitchen Garden.

The Lawn - a Tapestry of Green

Tour of the Hedges The Tomb of Albert

The tomb of Albert

The tomb of Albert Braided birch willow cabin which even the adults cannot help resist climbing into.

Plants include a variety of bulbs

Alley of the Poplars

Collection of conifers and ivy

The path of the birds

A walk past the Birdhouses reveals several types of chickens, ducks and geese

Plants include hydrangeas and different species of grasses.

Garden of the Year prize in 2006 awarded by the association of gardening and horticultural journalists.

Visit duration:
1 and a half hours

How likely are you to visit this garden? 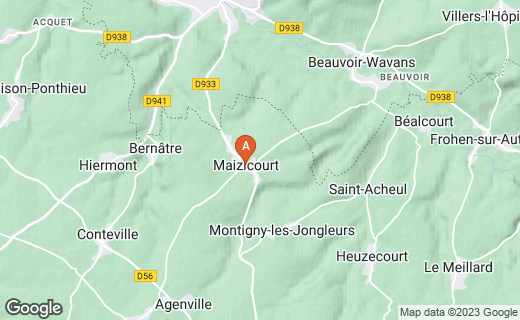