Love Bugs - Get a Room! Information About Love Bugs and How to Clean Them From Your Car

Don has been an avid traveler and motorhome owner for most of his life and he shares his experiences along with valuable tips for RV owners.

RVs and the INSECTS on the front.

My first encounter with the infamous Love Bug was a few years ago while on a vacation trip in my motorhome.

We were living in South Carolina at the time and we decided to spend a few weeks in a campground on the Florida panhandle.

After I had done my research and eventual trip planning, it turned out that the best path for me was to go down I-95 to I-10 in Jacksonville and then across I-10 to Destin, Florida.

As all my fellow RV owners, and auto drivers know; in the warmer times of the year, you are going to get bugs on the front of your Rig. It is unavoidable, and we all accept it.

Some of us will install large black "Bras" on the front of our Rigs, trucks or cars. Many will install custom cut sheets of plexi-glass while some will even have the newer technology clear 3M coverings installed.

They don't actually reject bugs, so you still get the mess, but get it on something other than your vehicles paint job, that is usually much easier to clean. And, of course, your paint job is not marred by the acids in the insets remains.

And then, there they were- Love Bugs!

Anyway, we had gotten down I-95 and we were actually still in Georgia, just a few miles north of the Florida state line when I saw my first Love Bugs.

They were interspersed, by this time, with a variety of other suicidal insects, but I did notice them as being different.

When I looked closer, I could see that there were two bugs connected together in their own little puddle of intestinal fortitude (sic).

I sat back and kept driving, wondering about this strange bug. But, I had a destination to reach, and it was still a hundred miles or so into Florida.

Curiously, as we continued on I-10 for about 30-40 miles, we ran through two large swarms of these things, and my windshield had become a serious mess. So, I turned on my Wiper/Washer.

Boy, what a mistake. Rather than remove the already dried insects, my action had just smeared them across my RV's windshield. Now the residue was so thick and right in my line of sight that I had to pull off at the next rest area on I-10 and clear this mess up.

When I had stopped and gotten out, I immediately walked around to the front of my RV and was just staring at the mess when another Rver came over laughing. He shook my hand and said; Love Bugs Huh?

I turned to him, confused, and I asked; What the Hell is a Love Bug? I had never heard of such a thing and once he realized this, he stopped laughing and patiently gave me an explanation about the world of Love Bugs in Florida.

It was a surprising Insect it seemed, and as I stood there he even gave me some tips on cleaning them off of my windshield, so I could keep on traveling.

I ended up spending the next 45 minutes pulling cleaning gear, chemicals, and my stepladder from the underside of my RV, cleaning the windshield so that I could see through it well enough to continue driving.

I continued to drive through swarms of these pests. Because of these stupid little bugs I ended up having to stop and repeat this cleaning procedure yet again before I finally got to my destination for the day. 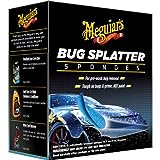 I use Meguiar's product almost exclusively on my RV and cars. And, I also use this sponge. It is just the right density to clean bug residue off while not scratching my paint.

What is a Love Bug?

There are a lot of different unsubstantiated stories about where Love Bugs came from.

It seems that they originated in Central America, and have been migrating north for decades until they eventually spread throughout Florida's ideal Tropical climate and landscape.

The bad thing is that Love Bugs are no longer isolated to Florida, but are now found in the southern reaches of Georgia, and Louisiana. And they are continuing to spread.

Why are they called LOVE BUGS

One unique trait of the Love Bug is their mating cycle.

Each nest will mature once a year and when they do, they rise from the ground and swarm to mate while in the air.

Once the males and the females are swarming together, the smaller male attaches its rear to the females rear and proceeds to begin injecting its semen into the female.

The typical female has over 200 eggs inside her and the male has enough semen to fertilize at least this many.

One unique thing about this mating process is the fact that the male stays attached until it has totally expended it semen, and then it dies, still attached to the female. You can see this in the picture at the top of this Hub.

Once fertilized, the female, if it hasn't found someones windshield to commit suicide on, will return to its nesting area and begin the process of laying the eggs and maintaining them as a new Love Bugs are born, and then it also dies.

This process is then repeated the next season.

When do Love Bugs appear?

I mention Spring and Fall above, but you can find them swarming in various places during April, May, September and October.

An individual nest will swarm only once a year, and then for only one to two weeks. And, when one does swarm, the swarm itself does not travel very far from its original nesting area.

The problem for us humans is that the date each nest swarms is seemingly arbitrary, so if you live on a certain street, one nest might swarm at one end, and be nearly gone when another nest swarms a few hundred yards away, a week later,

So, to us, the hapless humans who travel for miles just to pick up a loaf of bread, or a six-pack, it seems that Love Bugs are out and in force for months.

Sorry, you can't prevent the appearance of Love Bugs. Their nests, being underground, are almost undetectable.

Even the use chemicals can't work if you can't find where to spray.

There are some preferences that the otherwise stupid Love Bug has, that you try to avoid so that they will at least want to swarm and land somewhere else.

Light Colors- Love Bugs love bright and light colors, and will tend to swarm towards something bright and white over something dark or black. This one, I can attest to, as my first trip was in a Motorhome that was almost totally white on the outside.

Open Highways- Love Bugs do seem to migrate towards the lighter colored, hot, highways and roads of the South. On the other hand, most Southern highways are raised affairs usually surrounded by swamps and moist woodlands that are ideal for them to nest in. Thus, perhaps the reason for their being so abundant over highways.

Love Bugs are Stupid - OK, I guess every species of animal or insect is kind of stupid when having sex. I know my eyes roll back in my head and I can say and do some really stupid things when I am having sex, so I can imagine their predicament. And, of course, these things are flying around having continual sex for days.

Love Bugs will fly into anything, seemingly without any attempt to avoid a collision.

They will land on vertical surfaces, walls, people, windows, anything; and just roam around aimlessly, running into each other, losing their grip on the surface and falling at any time.

Love Bugs are not Dangerous - Probably the only good thing about Love Bugs, other than their contribution to the soil of a landscape, is the fact that they are safe to be around.

Love Bugs do not bite, or sting, or as far as I know carry any harmful bacteria or virus'. A pair might accidentally fly up your nose or into your mouth, but that's about it.

Love Bugs in the Future!

These pests are a hearty breed, and even though they are loved only by birds, they continue to migrate further north.

They do prefer swampy and wooded wetlands, but there is nothing to stop them from continuing to move further north over the next decade or so.

So, look for these Love Bugs with their unique mating process to continue to expand their nests until man ends up paving everything they can.

Cleaning Up after a Love Bug attack

You do need to clean up after these insects when they turn themselves into a smear on your automobiles windshield or front end.

Their bodies are acidic and if you add over 200 eggs and an equivalent amount of semen to the mixture, it all sets up within a couple of hours as if it was epoxy.

Or so it seems to me when I try to clean them from my windshield. And the longer the mess sits out in the weather, the harder it is to remove.

Are there any cleaners that are best for removing Love Bugs?

Sad to say, there are two things that you can do to ease the cleaning process.

First, have a well waxed automobile body and use something like RainX to treat your windshiled. If the surfaces are well treated, then the bug's remains will be relatively easier to remove.

Second, use warm, soapy water and a rag, combined with a liberal dose of "elbow grease" to wash the stubborn mess away.

Myself, I will hose them down a few times over ten minutes or so before I try to remove them. The water does seem to soften some of them up?