1. Cape Henlopen State Park, Delaware. A beautiful spit of sand that abuts the Delaware River and marks the boundary between the Atlantic Ocean, Cape Henlopen is well known for its World War II batteries that stood guard over the mouth of the Delaware River and emplaced to protect the upstream oil refineries near Philadelphia. Beautiful beaches are the highlight of this 5,193 acre state park that was established in 1964. It has been used for the public interest since 1682 making it one of the first public land areas in the (colonial) United States.

2. Trap Pond State Park, Delaware. Trap Pond State Park has the most northerly natural stand of bald cypress in the United States as well as camping, fishing, and nature trails. This out-of-the-way state park is best visited in the off-season because of the hot humid climate and bugs. It represents a small fragment of what was once a huge wetland ecosystem across the eastern seaboard. Located in southern Delaware five miles north of the Maryland state line, Trap Pond State Park contains 2,109 acres.

3. Pocomoke River State Park, Maryland. Along the Pocomoke River in the Eastern Shore section of Maryland separated in two different units, Shad Landing and Milburn Landing, is the Pocomoke River State Park within the larger Pocomoke State Forest. What make these units unique are the stands of surviving bald cypress along with a number of other plants that are commonly associated with locations farther to the south. Tupelo, loblolly pine, dogwood, and laurel can also be found here as well as a number of fauna such as the Bald Eagle and river otter. Like Trap Pond to the north, the bald cypress stands in Pocomoke State Park represent the vestiges of a once much larger wetland ecosystem that occupied these areas between Chesapeake bay and the Atlantic Ocean.

4. Swallow Falls State Park, Maryland. The main attraction of this 257 acre state parkin western Maryland’s Garrett County is theMuddy Creek Falls which spills over a 53 foot drop. Not surprisingly hiking is a popular activity as are the famous hemlocks which populate the park. The Youghiogheny River also runs through part of the park and is popular with whitewater rafters and kayakers. The river is well known for its riffles, rapids, and gorges here as well as in Pennsylvania’s Ohiopyle State Park.

5. Breaks Interstate Park, Virginia. A one-of-a-kind state park in that the park shares land in both Kentucky and Virginia hence the interstate designation, Breaks highlights the spectacular canyon that runs the length of a five mile stretch of the Russell Fork with depths between up to 1,600 feet deep. It too vies for the Grand Canyon title billing itself as the “Grand Canyon of the South”. The location of this 4,500 acre established in 1954 is isolated at the far western end of Virginia, (or eastern end of Kentucky). Daniel Boone is said to have been the first westerner to see the Breaks in 1767.

6. First Landing State Park, Virginia. Where the land meets the sea is a great description of First Landing State Park at the northern tip of Cape Henry in southern Virginia. The name commemorates the site where Christopher Newport landed in 1607 but the highlights of the park center more on natural communities than historic. A beautiful bald cypress swamp is easily accessible via wooden walkways and nature paths and across the road, Shore Drive, is the beach. This 2,888 acre park, Virginia’s most popular with over a million visitors a year, was known as Seashore State Park until 1997.

7. Grayson Highlands State Park, Virginia. Grayson Highlands State Park is a 4,822 acre park in southern Virginia built near the state’s highest elevation, Mount Rogers (5729’). Although Mt. Rogers is within the Mount Rogers National Recreation Area, Grayson Highlands covers similar high ground and serves as a beautiful staging point to hike or bike to Virginia’s highest peak and view the balds, or treeless summit of the southern Appalachians. The wild ponies are also a big attraction in these highlands and can be seen frequently along the footpaths. The scenery is beautiful and a number of scenic drives radiate from the park area.

8. Berkeley Springs State Park, West Virginia. This park in the northeastern part of the states has both natural and historical features that make it a must visit for any trip to West Virginia’s panhandle along the Potomac. The mineral springs discharge at a constant 74 degrees and were discovered early by settlers who took to the waters for health purposes including George Washington who surveyed the springs in 1748. The springs release 2,000 gallons of water per minute. The beautiful federal era bathhouse is a historical gem. Built in 1815 it replaced the earlier bathhouse constructed in 1784. On display at the park is the outdoor bathtub used by George Washington.

10. Hawks Nest State Park, West Virginia. Overlooking the New River Canyon, one of many such defiles in the state of West Virginia, this one is, along with the Breaks Canyon, one the most spectacular in the East making it popular with whitewater rafters. The park sits about 750 above the canyon and great views are gained from U.S. Route 60. Hawks Nest is located in southern West Virginia. 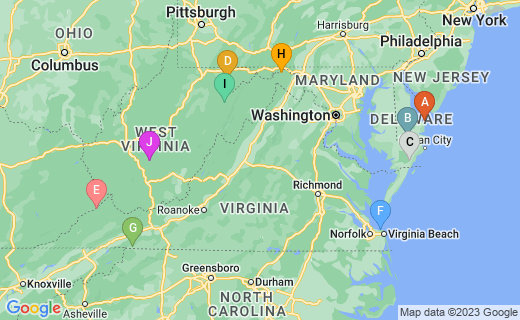