As an expat living in Luanda, I quickly realized that restaurant dining is one of the only things to do around for entertainment on weekday evenings. After a couple of weeks of living in a hotel in Luanda (read: no kitchen), my boyfriend and I quickly tried out all the expat hotspots, as well as ventured to some local spots.

Luanda is known for excellent fresh seafood, and for having lots of Portuguese restaurants, as well as some Chinese cuisine. Other types of word cuisines are quickly opening up around the city. Below is a lists of my favorite restaurants in Luanda.

Cais de Quatro is probably the most popular restaurant in Luanda amongst expats and rightfully so. The restaurant offers some of the most breathtaking views of the Bay of Luanda, a nice and relaxed atmosphere and pretty good food. The menu of Cais de Quatro is rather pricey but expectantly so, offering all kinds of cuisine ranging from Portuguese, to sushi, pasta, and burgers.

Chez Wou restaurant is my favorite Chinese restaurant in Luanda. It has really beautiful décor and a very extensive menu even with vegetarian options. Chez Wou is the only restaurant I know of in Luanda to offer tofu and specialty dishes. The staff is also really nice.

I have to say, Al-Amir, a Lebanese restaurant is my and my boyfriend's favorite restaurant in Luanda. That is a pretty bold statement and the reason for that is because:

Al Amir is located in the Macalusso neighborhood.

Caribe is another restaurant really popular amongst expats. The place has a really great view of the beach and sea, and has excellent fresh seafood. Everyone comes here for lobster.

Pizzaria Bella Napolis is a great pizzeria in Luanda. It's popular amongst both locals and expats.

Andy's Broadway is a popular Indian restaurant amongst expats, although very expensive. In addition to Indian cuisine, the restaurant also has a Chinese food selection. The décor is very interesting and a bit over the top. 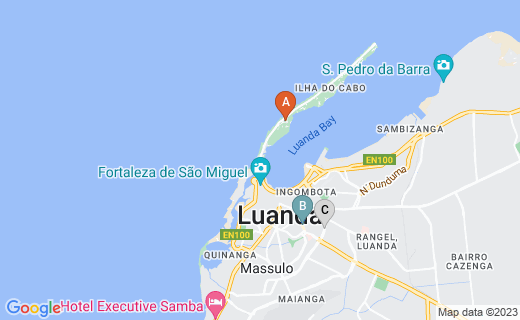