What to Do in Lviv (Lvov) Ukraine

Lviv is a fascinating city. It has been known by many different names, including Lvov, Lwow, and Lemberg.

In Lviv, a person could have been born in Poland, gotten married in Germany, raised their kids in the Soviet Union, and passed away in the Ukraine - never having left Lviv! That's because Lviv has been under different rule in the past century.

Not only is Lviv full of fascinating history, it's also a very beautiful city that shows the best of its many influences. It's a city paved in cobblestone, full of historic cathedrals and churches, many monuments and a wonderful atmosphere. It's also a UNESCO World Heritage Site.

I was lucky to have visited Lviv for a weekend and I'm happy to share my experience and recommendations with you!

Lviv has a rich history. The city was officially founded in 1256 by the Prince of Prince of Galicia and Volyn, Danylo Romanovych, who named it after his son Lev (which means "lion" in Ukrainian). Although archeologists date the city back to the 5th century.

The city became an important trade route and became the ceter of commerce and crafts. It was also strategically important.

In 1272 Lviv became the capital of Galicia-Volhynia when Lev descended to the throne.

The city has been part of the Polish-Lithuanian Commonwealth, then part of the Austrian Hapsburg Empire, then during the 20th century Lviv exchanged hands between Russia for less than a year, Poland, the Soviet Union and now it's part of the Ukraine.

Photos of Churches in Lviv

What to Do While in Lviv

Below is a list of things that any trip should include on the itinerary. You can do all these in a day trip.

Do you plan on visiting Lviv?

Restaurant in Lviv You Have to Try!

There's an awesome theme restaurant in Lviv that you can only find out about through word of mouth! It's called Kryjivka. The theme is Ukrainian patriotism and the food is traditional "Ukrainska" (Ukrainian).

To get in the restaurant, you need to knock on the door and say the secret phrase, "Slavo Ukrainy" (which translates to "glory to Ukraine") and then they let you in.

You enter this really cool looking room and the first thing they do is pour you a shot of "gorivka" (homemade vodka) from a flask. the room has a library and there's a secret passage into a dungeon! You enter the dungeon and the restaurant is in there, along with women singing traditional Ukrainian music. 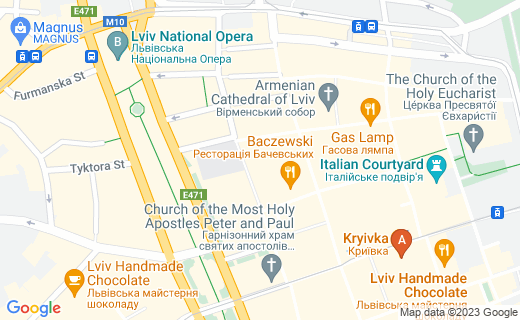