Valley of Kashmir famous for its pristine beauty is major tourist attractions of India. The so called Switzerland of India has many things in its lap to proffer to its tourists. The multitudes of attractions beguile tourists and leave them rejuvenated. From ancient mosques to sacred shrines, from beautiful lakes to majestic mountains this enticing place has it all.

It is alienated into two parts Lokut-Dal and Bod-Dal. In the western parts of the lake one can encounter few big and small islands. The lake is popular for its houseboats and Sikara rides. The houseboats have felicitous nickname of “Floating Palaces” built according to the British customs.

On the far eastern part of the city lying on the foothills of Zabarwan Mountains is led by Dal Lake. If one wants to enjoy the beauty of nature in tranquility then definitely it is the right place to go. The lake is away from city’s hustle-bustle giving its tourist a serene environment.

It is the largest freshwater lake of Asia. At one time there was an artificial island on the lake, where boatmen could shelter if the weather was bad but due to silting on that side of the lake has joined the island to the lakeside. It's now a very popular picnic spot for the people travelling to that place. The placid water may disguise one by fast blowing breezes over the lake.

Earlier known as Hegan or Hagoon Valley it got its new name-Betaab Valley from the Sunny Deol and Amrita Singh hit debut film “Betaab”. It has a picturesque landscape, beauty encompassing the snow covered peaks and coniferous forest within. It is the best campsite and trekking destination.

Throwing light on the history of this place, one comes to know that it was built in the mid of 17th century by the son of Shah Jahan, Dara Shikoh. It was situated over the ruins of Buddhist monastery as a tribute given by Dara Shikoh to its Sufi Teacher. The place is also known as “House of Fairies” or “Quntilon”. Standing on the hill of Zambarwan Mountain Range comprehends of seven terraces and splendid gardens.

It is also known as Sharika Peeth. The place is surrounded by Parvati temple, Akhund Mullah Shah and Khwaja Makhdoom Sahib Mosque and a gurudwara from the three sides of mountain. Durrani Fort is also one of the famous sites here.

In 1951 it was declared as a National Park. The park is divided into two parts Upper Dachigam and Lower Dachigam. A metalled road takes one to the lower Dachigam while trekking is the only way to get through Upper Dachigam. The endangers spcies of Kashmiri stag is found here with other different varieties of fauna like black and brown bears, musk deer and Himalayan marmot

Valley of Kashmir surely deserves a visit to be paid. One must book a holiday package to this place for experiencing the charismatic beauty of nature and what it has to offer. It would definitely give them some good memories to cherish forever. 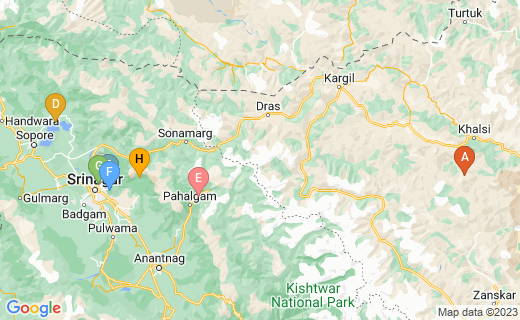 Quality of this Article