Studying History and culture are interesting topics for Sunil Kunnoth. He wanders in that pursuit and loves sharing his observations.

Mahe (also known as Mayyazhi), an erstwhile French colony is lying sandwiched between Kozhikode and Kannur districts on the northern part of Kerala in South India. While the rest of Kerala was under the British rule till India got independence in 1947, Mahe remained as a French colony for nearly two and half centuries.

Mahe had a rich heritage and culture in the gone days. It had an eventful past and a prominent place in the history texts. But the present Mahe displays a different picture. Now it is known for a 'negative' cause-The Land of Alcohols! People rush to Mahe for consuming and buying bottles to fuel their spirit level! As liquors are available in plenty and that too at a very low price, Mahe turned to be the paradise of boozers. The low tax rates and the resultant attractive price gave Mahe this unwanted fame.

Though Mahe held a strong French culture, you will not notice it on a casual visit. It exactly looks like another Kerala village. The typical charm of Kerala with her abundant beauty, greenery, thick plantation of coconut trees, language, culture, cuisine, everything resembles that of Kerala. It geographically lies in Kerala. Still, it is not a place under the rule of Kerala Government. Mahe is coming under the administrative control of Pondicherry, another state in South India. (Pondicherry was earlier a Union Territory and now a State). In a way, Mahe divides Kerala at a point! It is a district of Pondicherry. The Government of Kerala has no role in the affairs of Mahe. The people here speak Malayalam. Tamil and French also followed by some people.

How to Reach Mahe

Mahe is connected by Road with Kozhikode and Kannur, the major nearby towns.

Let's take a dive into history to know more about Mahe and its past. How this tiny strip of land got a prominent place in the pages of history? The answer is simple- when it fell to the French on December 3, 1724, it got that prominence! The French had arrived in Mahe in connection with the expansion of their trade activities in Kerala. They selected Mahe as their base camp. But they had lost it twice on war, first at the hands of the Marathas and then with the English. Nevertheless, they gained it back in 1816.

The French rule Mahe about 239 years. Their stay came to an end when Mahe was integrated into the Indian Union on June 16, 1954. The long stay of the French at Mahe had its own significance and influence on this soil, which even exists today though minimally.

Mahe still has a number of features that make it unique and different from Kerala and rest of the country. For example, Maheans celebrate an additional Independence Day, apart from the Indian Independence Day on August 15. The second one is on July 14-the Bastille Day of the French Day of Independence.

The French citizens of Mahe have formed an association named 'Union Des Francais de Mahe'. On July 14, every year, its members get together at St. Teresa's Church and take out a procession to the Statue of Marianne at Tagore Park and pay their respects to the nation of France.

The most remarkable sign of the French contribution is the St. Teresa's Church, situated on the Main Road, Mahe. (Photo is given above). It was built in 1736 displaying the marvels of the French architecture. The main festival here takes place in October is a major annual event attracting thousands of people from other parts of South India. People of all faiths visit the Church and pray with great devotion.

The Government House, where the Administrative office of Mahe is functioning is another display of French architecture. The historic building is situated on the banks of Mahe River. The things used by the French during their rule are displayed here.

Another reminiscent of Mahe's colonial past is the Statue of Marianne, established by the French in 1789 marking the 100th anniversary of the French Revolution.

The current Administration in Mahe has plans to open a museum showcasing the French culture in Mahe.

The river of Mahe is so charming and its surrounding area provides a scenic beauty. The Mahe township as a whole is picturesque and lure any visitor, the main attraction being the nearby river and Arabian sea. The river was prominently figured in many of the literary works of well-known writers. The famous Malayalam writer M. Mukundan had penned a novel titled "Mayyazhipuzhayude Theerangalil" (On The Banks of Mahi River), which was a great hit and was translated into many languages. Later, there came a film also based on this story with the title "Daivathintey Vikruthikal". Mukundan was an employee in the French Embassy, New Delhi and speaks French well.

There are still people in Mahe, who cast their vote for Election in France. They do it through Postal Vote. Similarly, Some retain their French citizenship even now. A few retain it just for the sake of maintaining pension given by the French government

Most of the French flavor and fragrance in Mahe's culture and heritage have slowly vanished with the passage of time. And the present Mahe displays a picture of a lost glory of prosperous past. Its charm will erode more in the coming days. The remaining generation of the aged people of this small township is now preserving the glimpses of the once strong French influence in Mahe. What will happen after their time? The only history can answer.

The Google Map of Mahe in Kerala 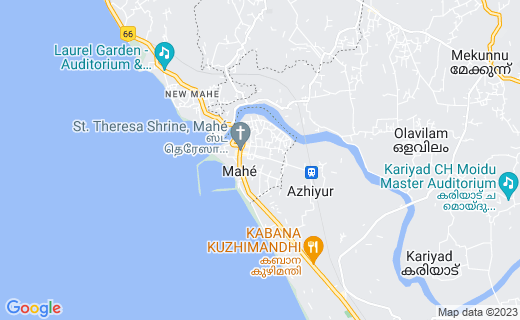