Are there any Poisonous Spiders and Venomous Snakes in Malaysia ? YES.

The exotic paradise known as Malaysia is situated in the South China Sea bordering Indonesia and Thailand.

The climate is considered to be equatorial and is hot and humid throughout the entire year. This presents the perfect climate for excessive breeding of many dangerous creatures such as snakes and tropical spiders.

The tropics are usually home to some of the most fearsome and largest venomous and dangerous creatures across the globe.

Stinging jellyfish and sharks patrol the open seas whilst cockroaches, scorpions, and deadly snakes roam the land. Even the annoying mosquitoes carry malaria.

Always be observant when in tropical climates and seek medical attention IMMEDIATELY if bitten or stung.

In Malaysia there are more than 40 different species of dangerous front fanged snakes.

18 species are found on the land, and 22 species of snakes can be found in the sea surrounding Malaysia.

Over a period of 22 years, some 55,000 snake bites were recorded in the Malaysian hospitals. This figure does not include the un-reported snake bites.

The mortality rate of all snake bites in Malaysia in less than 5%.

A very small snake in comparison to many others. Reaches approximately 30 - 36 inches with the female being slightly larger than the male.

Lives in coastal areas and prefers forest, farmland and other rural type areas. Be careful where bamboo grows.

This specious of venomous snakes in Malaysia is renowned for its bad temper. It may strike even if not being threatened or agitated.

Many snakes will disappear from an area where it has bitten a human for instinctive reprisal fears. Not the Malayan Pit Viper. It can be found within inches or feet of the same area many hours later after biting a human.

The venom can cause severe necrosis (melting of the skin). Approximately 1 in every 550 people will die from a single bite from this snake.

Many Malayan Pit Viper victims will have dysfunctional limbs after being bitten, or have the limb amputated completely.

NB: Never suck the poison out of a bite wound.

This snake is one of four types responsible for most snake bite deaths in Asia. Also known as the Indian Cobra (Naja Naja) is the poisonous snake which is most commonly used by snake charmers.

The average size of an Indian Cobra is approximately 6 feet, but can be found to be almost 8 feet in length. Its' food source is small rodents, birds and other snakes as well as delicious frogs and toads.

Their appetite for rats brings them within close proximity to human habitats. They have also been occasionally found in hotel rooms on the lower floors.

The powerful venom is classed as a neurotoxin. Human mortality rates vary from 7% to 20% once bitten. Every bite can deliver almost 250mg of venom, but it only takes less than 80mg to kill a fully developed human.

Bite symptoms can take from between 15 minutes to two hours to manifest. Initial pain, nausea, and severe headaches will follow.

A shortness of breath continues as the venom begins to circulate the body and attacks the nervous system.

Cardiac arrest and death could then follow if immediate treatment is not given. A shortage of snake bite anti-venom is the main cause of snake bite deaths.

NB: Never run from a snake, always walk calmly away.

Snakes found in Malaysia may also include the notorious:

Not all these snakes may be in the same area of land. But they all have the potential to turn any vacation into a nightmare.

NB: Not all snake bites inject venom into the victim. Many bites are 'dry' and act as a warning only.

Never panic if bitten by a snake. Panic and confusion can make the difference between getting the necessary treatment as soon as possible. SEE SYMPTOMS CHART BELOW.

Hornets and wasps are similar in the fact that they can sting a victim multiple times without dying. Vast hornet nests are a threat and very dangerous to people if they swarm.

In October 2009, three girls were killed when a hornets nest swarmed. Each girl received hundreds of stings to their bodies. This happened near Sarak on Borneo.

It is not clear whether the nest was disturbed by the family or were agitated by another animal.

Many hornet stings in Malaysia are easily treated with antihistamines purchased from local pharmacists or issued by local hospitals.

NB: When being attacked by hornets, do not run. They will take this as an act of aggression. Lie down or squat, cover yourself over and keep still.

There are many species of scorpion in Asia and Malaysia, but the black scorpion is the most common. Scorpion pinch with their incredibly strong from pincers and sting through a barb in their tale.

The venom is designed to paralyze their prey prior to eating it and also for defence purposes.

In 2002, a gentleman put on his attire he had discarded on the floor of his apartment the evening before. He felt a short sharp shock when he put on his pants.

He had been stung by a black scorpion. His medical treatment was delayed because he was far from any type of first aid and he died as a result.

Many stings from black scorpions in Malaysia are easily treated by physicians and hospitals if the anti-venom is administered quickly.

Out of over 1700 species, only 25 have been recorded as killing a human.

NB: Always check clothes and footwear before putting them on.

The reputation of leeches (which has 32 brains) is far worse than what they actually are. Once a leech has attached itself to a person, the victim will not lose to much blood.

Once the leech has had its' fill of blood, it will simply drop off. This will leave a small bite mark which will itch for several days before completely healing.

Leeches are usually not found in human areas where chemicals are used and urban waste is found. They prefer forest type places where a continual supply of mammals provide excellent feeding for them.

Ripping them off the skin will inevitably leave small pieces of their mouth inside the skin, which may cause infection.

Wearing thick clothes or extra layers will not stop leeches reaching the skin. But there is a 'leech sock' which has proved so far to be the best deterrent against the slimy foe.

NB: Protect yourself with salt, insect repellent, and mosquito repellent. Tobacco kills leeches. Rubbing yourself with a water solution infused with tobacco would kill most leeches on your body.

Centipede species (Scoplopendra Subspinipes) are found in many tropical climates such as Asia. There are many different names for the same species depending on which country it is found.

Although mainly harmless, in the Philippines, a 7 year old girl died within 30 hours of being bitten by one. Growing to an adult size of approximately 20", they are pretty aggressive and should be avoided.

It feeds on mice and other rodents as well as reptiles and frogs. It can be eaten by humans for its' high protein values.

Bite victims may suffer immediate severe pain followed by swelling and a weakness as well as a fever. The venom also contains a cardiotoxic, which may cause breathing difficulties.

NB: If bitten by anything, collect the perpetrator if possible and take to the hospital for identification. People can die if they are given the wrong anti-venom.

Most Malaysian spiders are harmless, but extremely colorful. The most reputedly fearsome spider is the Tarantula.

The Earth Tiger Tarantula is a very rare species and can bite, but there have been no reported deaths from the venom.

The colorful variety of spiders in Malaysia is a sample of nature at its best.

Most species are fundamentally and physically different to most western species of spiders.

NB: Leave the spiders alone, and they will leave you alone.

What are you more scared of ? 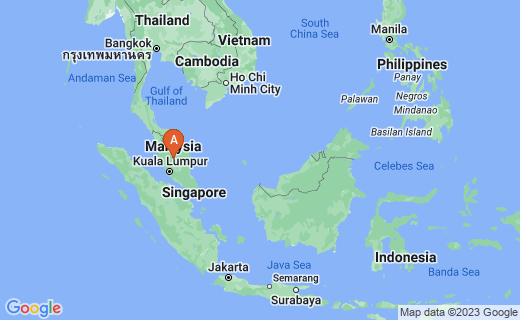