Malaysia: Ten places worth visiting (in no particular order).

Overview: Malaysia is a country that occupies the southern block of the Malay Peninsula, or West Malysia, below the Isthmus of Kra (Thailand) and the northern third of the island of Borneo, or east Malaysia. East Malaysia is composed of the state of Sarawak and Sabah and the remaining eleven states can be found in West Malaysia. Separated by the South China Sea into these two distinctive geographic parts and composed of thirteen federated states, Malaysia is located just north of the equator and has a tropical climate. Hot and humid temperature persists year round. Malaya became independent in 1957 and later in 1963 Malaysia gained full independence as a federation with Sabah, Sarawak, and Singapore. Singapore would leave the federation in 1965 as an independent city-state mostly because of its majority ethnic Chinese population. Occupying 127, 354 square miles (329,847 square kilometers) and with a population of 27,565,000 million, Malaysia is one of Asia’s economic success stories. The country’s traditional cash exports were based on tin mining, rubber plantations, and palm oil although today those cash crops have been diversified by microchip manufacturing, electronic assembly, and tourism.

Kuala Lumpur. The administrative, cultural, and economic capital of the country, Kuala Lumpur, or K.L., has much to offer besides shopping and glitzy hotels. Born out of the tin mining industry that has been extracted on the peninsula for 150 years, K.L. is home to Malaysia’s NationalMuseum, a not-to-miss cross section of the country’s natural and cultural history in a beautiful stylized building that resembles a native long house. The PetronasTowers, formerly the world’s tallest buildings, and the K.L.Tower offer outstanding views of the city and countryside, and if your appetite is calling, the city has numerous sidewalk restaurants that specialize in Indian, Chinese, and Malay cuisine. The city has a lot of extant British colonial architecture which lends well to the backdrop of tropical green. The railway station and Merdeka Square are exceptional examples.

Genting Highlands. Simply known as “Genting” in its short form, this is one of Malaysia’s most popular tourist destinations because of its close proximity to Kuala Lumpur, only one hour away by car. Its greatest pull is without argument the gambling venue - the only place in Malaysia where it is legally allowed. The gondola ride, or the 3.38 km Genting Skyway, to the mountain top hotel/entertainment complex is truly beautiful, a trip through virgin jungle, although the top can be a bit of a turn-off because of the overdevelopment. Amusement parks and high rise hotels dominate in an otherwise pristine setting that pits development against conservation. At 1760 meters above sea level (5774’) you can expect cooler weather at the very least. Genting was established from scratch in 1965 apparently inspired by the beauty of CameronHighlands. The First World Hotel, the centerpiece of the resort’s lodging, was listed in the 2006 Guinness Book of Records as the largest hotel in the world with no less than 6,000 rooms.

Cameron Highlands. Started as a hill resort during the British colonial era in the 1920s, CameronHighlands remains a quaint hill resort and the center of a local tea growing industry. It also offers golf and refreshing breezes and cooler temperatures because of its elevation at about 6,000 feet above sea level. CameronHighlands is about 200 kilometers from K.L. and 85 km. from Ipoh in the state of Pahang. Views from the resort are exceptional and hiking and butterfly collecting are popular activities.

Taman Negara. A huge national park is the essence of Taman Negara, a preserve dedicated to protecting a gigantic swath of virgin jungle in the heart of the Malay peninsula. Established in 1938 the park covers 4,343 kilometers square and contains some of the world’s oldest tropical rain forest. Within its boundaries are a number of endangered fauna which include the Malayan Tiger, Sumatran Rhinoceros, and the Malayan Tapir. The highest point in east, or peninsular Malaysia, Gunung Tahan (2,187 m, 7,175’) is also within the park and can be reached by a hiking trail which takes 5 days. Plan ahead!

Penang (George Town). The colonial heart of Malaysia is located two-thirds of the way up the Malay Peninsula on the west coast. The city named fashionably after the English monarch, George Town, when it was under British colonial administration remains the capital of the state of Penang and its inner city is a recognized UNESCO World Heritage Site property. Founded in 1786 by Francis Light founded the city to establish a trading anchor for the British East India Company. FortCornwallis was established by the British and can still be visited today. Armenian Street and the Jewish cemetery hint at the diverse cosmopolitan mix of early Georgetown. Not to miss is the Buddhist temple, Kek Lok Si, which has excellent views as well. George Town is the second commercial center in the country after Kuala Lumpur.

Malacca. Malacca was established for much the same reasons as George Town, to take full advantage of a strategic location close to the Straits of Malacca and the lucrative spice trades that funneled through this narrow inlet that connected the Pacific and Indian Oceans in commerce. The potential for the site was already realized by the local Malay sultans when the Portuguese arrived and abolished the sultanate in 1511. Thereafter the city remained a center of competing European interests and the Dutch eventually replaced the Portuguese in 1641 and remained until 1798. Eventually Great Britain took control of the city after Singapore had been established as a primary trading location. Extant Portuguese and Dutch colonial buildings are the hallmarks of the city’s historic sites which along with those in George Town are among three such UNESCO World Heritage sites in Malaysia. The Dutch Stadthuys and the Portuguese fort A Famosa are the best known among these. Malacca is also the capital of the state of the same name and is located about 148 km south of Kuala Lumpur.

Tioman. Off west Malaysia’s southeast coast, Tioman’s remote location adds to its secluded appeal. Called Gunung Daik Bercabang Tioman (TiomanIsland), Tioman has a great mix of pristine beaches, interesting flora in its forested and mountainous interior, a small population and an incredible diversity of marine life in its surrounding waters. Access is by propeller-driven planes from Singapore or Subang, Selangor, or by ferries from the mainland. The island was the sight of filming for the 1958 movie South Pacific based on James Michener’s novel.

Langkawi. The potential of Langkawi as a world class resort destination was not realized until the 1980s but the karstic archipelago of 104 islets and opaque water is Malaysia’s answer to Phuket. Located just south of the Thai-Malaysian border on the developed west coast of peninsular Malaysia, Langkawi’s tropical splendor should not be underestimated despite the tinge of over development that includes a gondola that takes visitors to the top of the mountain for great views (never mind that it is intrinsically an eye soar against the brilliant blast of green jungle). Enjoy the clear waters, duty-free shopping, and sneaky monkeys. Resorts of all kinds can be found here as well as planeloads of Russian tourists in their signature ball-blaster swim trunks. If the main island is too much for you chartered trips go to many of they unpopulated islets will surely take the sting off the commercial reality. Only two of the islands have any major development while the remaining are largely uninhabited, tropical bliss. Na zdarovie!

Pulau Redang. Malaysia’s east coast is among the finest in the world for the beach obsessed. The pristine clear waters of the South China Sea make this an incredible site for snorkeling, scuba, and simply viewing the beach scenery. Redang is an island off the state of Terengganu on peninsular Malaysia’s far northeast coast. Access to the island is from the city of Kuala Terengganu and RedangIsland is one of several that comprise a national marine park.

Gunung Kinabalu. Known as MountKinabalu (4.101 meters, 13,455’) to westerners, this monolithic mountain rises from low plains to over 4000 meters making it one of the world’s most prominent peaks. Located in the state of Sabah on the island of Borneo, it is less accessible than the other sites because it requires a dedicated trip. Surrounded by a national park of the same name, Kinabalu’s granite heights are a major destination for hikers and climbers, and a hike to the summit can be arranged by checking in with the park headquarters. Do some planning as advanced reservations may be required because of the growing popularity. The mountain is home to unique flora and fauna and includes the largest flowering plant in the world which inhabits the high cloud forest zones. Above timberline is a stark world of ice-polished granite that bears hallmarks of the last ice age. If you plan to hike bring clothes for cold weather. A good way to relax after this strenuous climb, which requires no technical experience except a fit body, is to visit nearby Pouring Hot Springs and soak in the hot mineral waters. The beautiful beaches of TunkaAbdelRamenNational Park, just offshore from Kota Kinabalu, offer snorkeling, scuba, and beachcombing. They are easily accessed by dinghies that run frequently from the pier. 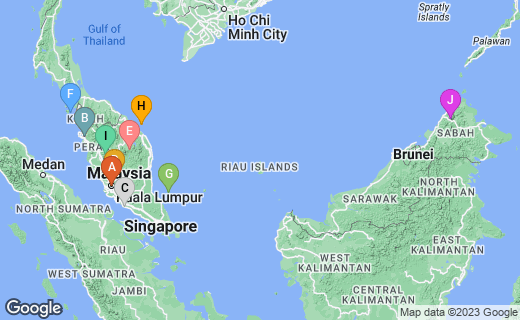