Mangalore is situated in the Dakshina Kannada district, in the state of Karnataka, India. It is a part of Tulunadu. Previously Dakshina Kannada was a vast district with eight taluks. From August, 1997, this was bifurcated into Udupi district and Dakshina Kannada districts. D.K presently consists of five taluks i.e., Mangalore, Bantwal, Puttur, Sullia and Belthangady taluks whereas Udupi district consists of three taluks i.e., Udupi, Kundapur and Karkal. These two districts together are called Tulunadu as the most popular language is Tulu here. Mangalore is almost 350 km to the west of Bangalore, the capital of Karnataka state.

Mangalore is famous for the Mangaladevi temple; the city derives its name from the Goddess Mangala, who is the epitome of love and affection. Ancient Hindu sages like Vyasa, Vasishta, Kanva and Viswamitra are believed to have spent their time in meditation in Sahyadri Mountains near the present Mangalore. The famous city Bangalore is around 350 kms from Mangalore 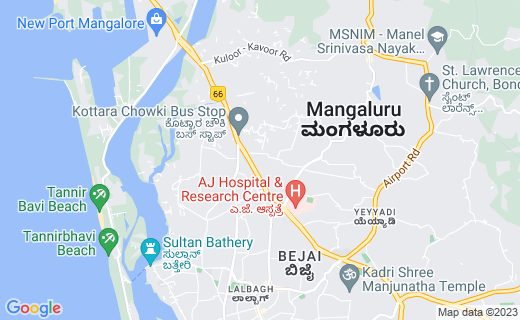 The port in Mangalore

Mangalore is also famous for the Mangalore port in the Arabian Sea, wherefrom a major portion of the commodities are exported from India. Around 10 kms from the city, the modern port is now India’s ninth largest cargo handling port. The port exports coffee and cashew nuts in bulk.

This is a very old university located in a hillock and is spread over 350 acres of land. The university has different departments under the stream science, arts commerce and others. It is also a vibrant research centre receiving crores of rupees as grants for research projects and has strong publication output.

Mangalore is home to many companies like Mangalore Chemicals and fertilisers limited, Kudremukh iron ore company limited, Mangalore refinery and petrochemicals limited, National thermal power corporation limited and Infosys limited. In addition to these, there are many tile, coffee and cashew nut factories in Mangalore. Mangalore has an airport, a port and railways connecting the city to the other parts of India and world.

It is situated in the heart of the city on the lighthouse hill about a kilometre away from the Nehru Maidan Bus stand.

The church was built in the year 1899 -1900. The walls of the church has paintings by the artist Anthony Moscheni of Italy.

The chapel is in the St. Aloscious college premises.

Pilikua means tigerpond. It is situated 18 km from the city. Established in 1990, Pilikula has a zoo, botanical garden and an amusement park. The zoo has a variety of animals including poisonous snakes. Dr Shivaram Karanth Biological Park at Pilikula near Mangalore has recently become very famous for the first known successful instance of captive breeding of King Cobras,one of the large venomous snakes in the world. Out of the 147 eggs laid by three female king cobras, 32 hatched in the breeding centre on the park premises. The baby cobras measured 17 inches on birth. These cute babies have sufficient venom to kill two adult human beings within half an hour in one bite.

This is city’s only museum and provides a great knowledge about Indian history and heritage. The museum houses lot of metallic icons, statues, ancient lamps and paintings.

Sulthan bathery is a watchtower built by Tipu Sultan to watch the entry of warships into Gurpur river.Created in blackstones, it looks like a miniature fortress. It has got many apertures for rising canons all around. It is situated in Boloor, 6 kms away from Mangalore. A panoramic view of the Gurpur river can be obtained from the top of the tower. You will also get a water sports centre near by the tower.

Jamalabad fort is located 8 km north of Belthangady town, (65 km from mangalore). It is situated in the jamalabad village of Kudremukh and is part of the Kudremukh wild life sanctuary. The fort is built on a granite hill which is about 1788 ft above sea level. The fort was built by Tipu sultan in 1794 and named after his mother Jamalabee. Official entry to the fort is restricted between 6 am to 6 pm.

It is a garden around 5 km from the city and it is maintained by Karnataka Horticulture Department. It is a large open area with some flowering plants and trees ideal for evening hangout.

Shree Mangaladevi temple is situated 3 km from the city. The city derives its name from the deity. The festival of Navarathri is the important festival here. Sri Ramakrishna Ashrama is also situated very close to the temple. It is a branch of Sri RamaKrishna Ashrama, Belur, Kolkata which is established by Swami Vivekananda.

It is believed to be the oldest temple in South India.

The temple is situated at the Kadri hills.

The deity of the temple is Manjunatha (Shiva).

The peculiarity of this temple is the nine tanks.

The temple is situated four kilometres from Mangalore city.

Kukke temple is situated in Sullia village around 105 kilometers from Mangalore.Lord Subrahmanya is the main deity here. The serpent God, Vasuki is also worshipped. The lush greenery and the hills surrounding the temple are spectacular.﻿

Dharmasthala temple is situated in Dharmasthala, Belthangady Taluk, 75 kms from Mangalore. The main deity of the temple is Shiva who is known as Manjunatha and the temple actually belongs to a sect of Hindus called Shaivite who traditionally worship “Shiva” as their God. The priests of this particular Shaivaite temple are Vaishnava who traditionally worship “Vishnu” as their God. This is very significant considering the unrest and differences of opinion the two groups had from the beginning. Another importance is that the temple is run by a Jain family. The temple stands as an embodiment of peace and tranquil where three different sects of people harmoniously take care of the daily activities and serve the devotees.

How far is Manipal university from Mangalore?

Manipal University is an educational hub which attracts students from all over the world. It is situated in Manipal around 4kms from the temple city of Udupi. In one of my previous hubs, I have described about Udupi and the places around. Manipal is a part of the Temple city of Udupi and is 60 km north of Mangalore and around 400 km from Bangalore. People who reach Bangalore can take an overnight bus to reach Manipal. Buses run by the Karnataka government or private buses are available. They can also come to Mangalore by flight and take a taxi or bus to reach Udupi and Manipal. You can also reach Manipal by train, the nearest railway station being Udupi.

Vivanta by Taj at Bekal

How far is Bekal from Mangalore?

Around seventy kilometers from Mangalore is another beautiful place called Bekal about which I have written a hub. Bekal fort and the "Vivanta by Taj" hotel is a must visit place if you have time at hand.

When to visit Mangalore?

Mangalore will have comfortable weather from December to February. Being in the tropics, other months are usually hot. The city has two railway stations and the nearest airport is Bajpe airport, Mangalore.