A Brutalist Shaft at the Heart of the City

This 29-story shaft of black granite, with its distinctive grid of precast concrete window frames, was originally constructed in 1971 at the key downtown Cleveland intersection of Euclid Avenue and East 9th Street, in the city’s financial core. Its hefty Modernist/Brutalist mass became a strong visual backdrop and counterpoint to the five-story 1908 Italian Renaissance bank-as-temple of architect George B. Post at its base. That classic structure had served as the headquarters of Ameritrust Bank (under its former name of The Cleveland Trust Company) until growth demanded a much greater consolidated downtown presence. Breuer had in fact designed twin 29-story towers for the bank’s continuing growth, but the second tower — intended to be erected symmetrically to the east of the original temple along the Euclid Avenue street frontage —was never realized.

Hungarian-born in 1902 of Jewish descent, Marcel Breuer — ‘Lajko’ to his friends —first studied, then later taught at the Bauhaus through the 1920s. Breuer was gifted not only in architectural design, but also in carpentry and in the fabrication of tubular steel assemblies. Perhaps his second-best-known work is that early Modernist classic, the Wassily chair (so-called because the painter Wassily Kandinsky was an early fan and first recipient of the innovative and aesthetically striking chair).

An avowed architectural Modernist, Marcel Breuer fled Germany in the 1930s, settling in London, where he developed furnishings of bent and formed plywood, such as the iconic Breuer Chair. He later relocated to Harvard, teaching at its school of architecture, and partnering with his Bauhaus colleague Walter Gropius in residential design. By 1941, he had relocated once again, forming his own architectural firm in New York City.

By the early 1950s, Breuer was capturing significant commissions, most notably the 1953 Paris headquarters of UNESCO, and New York’s 1964 Whitney Museum of American Art. His early concepts for a Grand Central Tower in New York led to his being selected by Cleveland Trust Company officials to design their planned new headquarters tower to flank their historic temple of a bank at East 9th Street and Euclid Avenue. 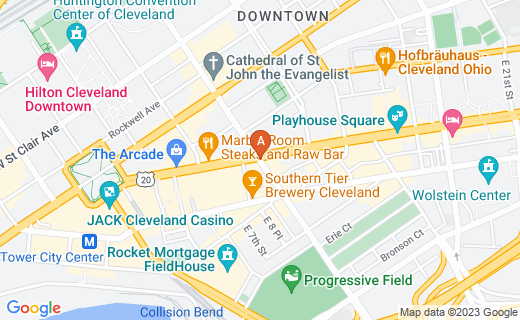 This location has long been considered Cleveland's primary financial nexus.

For a number of years the former Ameritrust Tower sat vacant and in limbo. The Ameritrust banking empire had previously been acquired by Society Bank, itself soon folded into the Key Bank empire. Key Bank had also developed its own headquarters in the 57-story Key Tower adjacent to Cleveland’s Public Square. After sitting vacant for a time, Breuer’s tower and the adjoining bank properties were acquired from a private developer by the Commissioners of Cuyahoga County for use in consolidation of county offices. That plan, however, soon ran afoul of the recessionary economy and downtown Cleveland’s development malaise.

After the local economy stopped its slide and began to recover, Cuyahoga County opted instead to let go of the former Ameritrust properties, instead demolishing structures on an opposite corner for their new consolidated headquarters. (The County's former offices on Ontario Street made way for the newer Convention Center Hilton.) Meanwhile, the former Ameritrust structures were redeveloped as the Metropolitan At The 9, a complex including a hotel, residential units, restaurant, bars, and retail. The Italian Revival temple that once housed the historic Cleveland Trust bank is in fact now home to a chic and high-end urban grocery store and food hall.