Rochelle's interest in California history was rekindled when she began leading tours at a local museum in an 1850s gold rush town.

A Town With a Plan

The footprint of Mariposa, California was planned and plotted out by pathfinder John C. Fremont in the early days of the gold-rush era.

Unlike other little towns and settlements that grew "organically" according to the random placement of campsites, miners shacks and deer trails, this one was actually planned by a military officer, surveyor and mapmaker who had enlisted the famed scout, Kit Carson to accompany him on several exploratory expeditions.

Fremont mapped out the streets of Mariposa in straight lines which followed the general direction of the meandering creekbed at the low point of a narrow foothill valley.

The ore-crushing stamp mill. (A rather wobbly video-- pretend it is a California earthquake.)

The short cross streets were numbered. First , Second, Third-- up through Eighth.

The long streets were named after himself (Charles-- his middle name), his wife (Jesse), his brother-in -law (Jones) and his father-in-law (Bullion).

A headquarters structure for the mining operation was built with adobe brick with foundations of hand laid stone. Hefty timbers were raised for a general store, a hotel, a saloon and card parlor. A livery stable followed, as well as a warehouse. Other businesses and residences were added, one after the other.

Fire, the fearful destroyer of hastily built boom towns, ravaged the community more than once during its history, but the stone foundations and retaining walls survived and rebuilding began almost before the embers cooled. Some buildings were reborn in brick with fireproof steel doors.

Other permanent buildings arose with plastered walls and fire resistant sod roofs. They had covered walkways in front and decorated trim on the cornices.

There are still stories in the foundation stones. Basement apartments and shops, an antique shop and a beer bar still reveal traces of the amazing rock substructure that shows the pioneer intention of a town that was meant to endure.

It has endured. Though economic tides have waxed and waned, Mariposa is still very much a living town, retaining much of its historic flavor.

The mines have been closed for many years, but hobbyists and rockhounds still do some prospecting. Tourism fuels most of the business now, though ranches and vineyards are still going strong in the area. Artists and outdoor enthusiasts have also come to call it home.

If the prospectors who originally came for the gold returned today they would still recognize the town.

The neo-classical style courthouse has been the seat of county justice for more than a a hundred and fifty years. It's clock tower bell still struck the hours faithfully until just a few years ago. (The clock and the building are now awaiting a much needed repair and refurbishment.)

The slender steeple of St Joseph's Church still points heavenward, and a row of buildings on either side of the main street looks much the same as it did during the latter years of the gold rush.

Old hotels have maintained their Victorian style, The Oddfellows Lodge hall and the Trabucco store still have their iron shutters and pressed tin ceilings.

Mariposa honors its heritage by preserving historic buildings and keeping modern intrusions to a minimum. There are dozens of historical landmarks and buildings in the county. There are only two fast food franchises, but those are outside of the historic district. Even then, corporate signs are not prominently displayed.

There have been modernizing changes in the past century and a half. The roads are paved now. There is electricity and a couple of gas stations. There are telephones and a few TV satellite dishes. People even have internet access.

There are more churches and fewer saloons than in the old days but there are still no traffic lights in the town. A four way stop signs mark the highway intersection at the north end.

The stamp mill that once crushed gold ore 24 hours a day, with a thunderous and rhythmic pounding, now is only put into action when a busload of tourists stops at the history museum.

General store exhibit in the Mariposa Museum and History Center

Community organizations have barbeques, and pot lucks , and craft shows, and square dances and concerts. Some of these events are fund-raisers for a community member who has had an emergency. Everyone seems to pitch in to help their neighbor. If your car breaks down, someone stops to help.

At least half of the people in town are volunteers for one thing or several. People give their time to various service clubs, church activities, the history center, the animal shelter, the hospital, the 4-H club, the creek beautification committee, the artist's cooperative gallery, the friends of the library, the police department, the senior center, the emergency food pantry, the woman's shelter, the arts council, the schools, the search and rescue team and-- of course -- the fire department is all volunteer.

Every so often there is a parade in town and it is pretty much the same no matter what holiday is being celebrated. Townspeople line the street to watch the fire trucks from each corner of the county pass by.

The veterans have an honor guard, the high school band plays, the pizza joint employees march while spinning and tossing fake rubber pizza crusts into the air.

Service clubs have floats decorated with crepe paper. Old men drive their classic cars and a few people ride their horses. Everyone throws candy to the kids.

Mariposa is still a small town. There is a core of generations-old families here, but the population has grown so that newcomers are not necessarily considered "outsiders" as they might have been a couple of generations ago.

Many newer residents are often from Southern California or the Bay Area. They have blended in, not as people who want to change the lifestyle here, but as those who want to preserve it.

The Mariposa History Center and Museum was started by a group of local residents around 1950.

The California Centennial got some people thinking that they had better start preserving some of the remnants of earlier days.

The exhibits are put together in a charming and informative way that puts related items into a context.

Touring the displays is like peeking into the windows of previous centuries to see the saloon, general mercantile, woodworkers shop and many kinds of stores and residences.

Authentic "old stuff "which was actually owned and used in the area, is displayed in an interesting manner.

The museum exhibits are based on the letters of an educated young man who came from Massachusetts as a gold seeker.

His Eastern friend and his family saved the letters which had a lot of observations about life and times in the gold camps of this area between 1850 and 1852.

The grounds have a full-size operable stamp mill, other mining equipment, a blacksmith shop and, a few relocated historic buildings.

(See my "silly person's tour of the museum" by clicking here.) 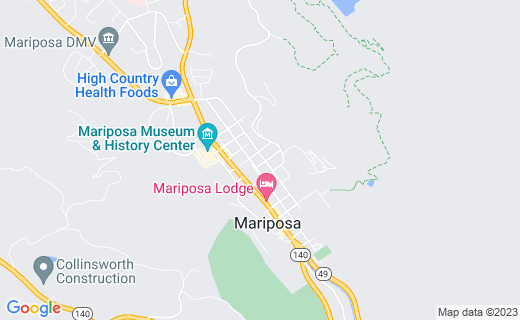 For anyone who is interested in the California Gold Rush, it is a good place to start a tour of highway 49- "the Golden Chain" from the south. . . or a good place to end up, from the north.

Mariposa also has the California State Mining and Mineral museum at the fairgrounds. (Check on this-- it has been slated for closure due to state budget cutbacks.)

Gems and minerals make a dazzling display, including a unique and priceless 13 lb (almost) chunk of crystallized gold known as the Fricot Nugget.

A pleasant day or two can be spent visiting the old church and cemeteries, the famous "Oldest courthouse in continuous use west of the Rockies", and other interesting old buildings.

In addition to the historic sites there are antique stores, art galleries, wine tasting, gift shops, a couple of excellent restaurants, motels, stationary store, gem shop, drugstore, other general shopping stores for hardware, groceries and other necessities and of course the cultural center of modern Mariposa...the Auto Parts store.

State Highway 140 (which overlaps Highway 49 through the town of Mariposa) will take you to Yosemite National Park in less than an hour.

Mariposa feels like it belongs to an earlier era. An interesting place to visit, you might just find yourself imagining what it would be like to find your own gold mine.

Have you ever visitd Mariposa, California?