Marrakesh: A Mirage in the Making

‘Morocco’ in Arabic is known as Al-Magrib, meaning ‘land of the west,’ aptly named since most of its long coastline faces the Atlantic Ocean. The remainder looks out across The Straits of Gibraltar and the Mediterranean, towards Spain.

It is a land of rich diversity, a melting pot of different cultures, the main influences being Arabian, European and African. The terrain is one of contrast; from the snow capped Atlas Mountains of the North to the parched edges of the Sahara desert, in the south, with many fertile plains in-between.

'Ships of the Desert'

Marrakesh - One of the Imperial Cities

In the very heart of Morocco, 240 km inland from Agadir, lies Marrakesh, known as ‘The Red City’ because of the red, earthen walls of the old Medina that surround it. It is situated in a lush, verdant setting at the foot of the High Atlas Mountains, the snow from which provides the city's water.

Surrounded by dry barren plains, Marrakesh reveals itself to the visitor just like a mirage, appearing, as if from nowhere, through the misty haze from the nearby mountain range.

The city is mishmash of old and new. Luxury hotels line the same streets as less salubrious buildings and spacious riads with quite insignificant frontages reveal magnificent courtyards within their vast, secret interiors.

The Courtyard of a Typical Moroccan Riad

Of Souks and Souvenirs

You can bargain for souvenirs in the ancient souks behind the lively market square of Djemaa el-Fna where both tourists and locals came to buy. Dominated by the Koutoubia Mosque, this is the largest market square in all of Africa, if not the world and it is possible to buy everything and anything here.

The square is not only a centre for trading but it is host to a huge variety of street performers, henna tattooists, musicians, snake-charmers and just about anyone who thinks they can make a living from the huge throng of people who visit daily.

It's an exhilarating place to spend a day but be constantly wary of pickpockets and be careful you are not persuaded into buying items you don’t really want - some traders can be quite aggressive in their sales tactics.

If dressing up in the traditional Moroccan style for the sake of memorable photographs is your aim, you can easily purchase kaftans and Djellabas from the market and locally made jewellery and Fez hats too - all at ridiculously low prices by European standards and American standards.

Adjacent to the square is the El Bahia Palace which for an entrance fee of just a few Dirhams is worth seeing for its splendid architecture and interior. The marble-paved courtyards, gold-embossed ceilings and beautiful gardens are a delight to the eye.

At night the central area of Marrakesh is even livelier but again it's wise to be wary and imperative that visitors don't venture into the labyrinthine alleyways of the Medina alone.

Frequent flights to Marrakesh from many European airports have made the city more accessible in recent years. The rail and road networks in Morocco are both excellent, allowing for affordable and comfortable travel between Marrakesh and the coastal regions. There is a motorway to Casablanca so Marrakesh is no longer the inaccessible destination it once was. Thus it is possible to combine a beach holiday with a few days in Marrakesh.

The visitor to Marrakesh can find an oasis of calm in the mountains away from the hustle and bustle of the city. Trips into the High Atlas Mountains can be arranged to discover the isolated rural Morocco unchanged for centuries. Marvellous opportunities for photographs exist in such away-from-it- all places such as the Ourika Valley.

Also away from the ancient red walls of the Medina and the bustling city are exclusive purpose-built developments with luxury health spas and golf and ski resorts. This traditional and modern mix of any holiday to Marrakesh is part of the appeal. Constantly bathed in cooling sprays of water to protect from oppressive temperatures, these oases of the wealthy are springing up like mirages in the desert to tempt tourists and investors alike.

Investors are eager to purchase here which is always a positive sign, but any visitor to Marrakesh must also be prepared to see genuine poverty. It is as well to remember that Morocco is still a developing country and although tourism is helping to benefit the standard of living for the general populous, these improvements take time to materialise.

It is easy to see why Marrakesh is fast becoming one of the most fashionable places in the world to visit; it is even a popular destination with the rich and famous.

Morocco itself has attracted names such as John Paul Gautier, Yves Saint-Laurent, The Rolling Stones and Kate Moss and is fast becoming a destination to rival the more established tourist destinations in and around the Mediterranean.

Morocco is Located in Northern Africa 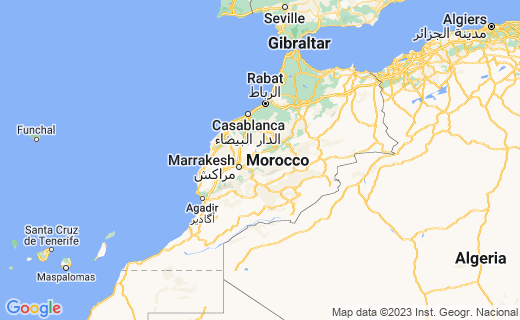 A Trip to the Tanneries Isn't for the Faint-Hearted