Chuck enjoys both the beauty of the great outdoors and the challenge of finding and photographing its wild inhabitants both big and small.

Flower Wasp on a Thistle

A Photo Encounter with A Wasp

While hiking with my wife, daughter and some friends along the Mt. Lemon hiking trail in the Santa Catalina mountains, which hug the northern edge of Tucson, Arizona, I came across what was for me an unusual looking wasp. While bugs generally aren’t my thing, good photo opportunities are and this wasp was very photogenic.

This wasp was larger than most wasps I have seen. It appeared to be almost two inches in length and its body appeared wider and thicker than that of most wasps I was familiar with.

But what caught my eye was not its size but the two bright orange rings on its abdomen. In fact the rings, which were separated by a narrower and hairy black ring, dominated the flower upon which it was perched. The top of the abdomen was black as was the bottom but the orange rings are what made the wasp stand out.

Video of Flower Wasp in the Wild

Our trail was on Mt. Lemon which overlooks Tucson and is a part of the Coronado National Forest which encompasses a large area of mountains in this part of Southern Arizona. The altitude was about 9,000 feet above sea level leaving us well above the sweltering summer heat in the desert below. In fact the temperature, vegetation and environment in this area is more like that found in hill country in northern states than what one expects in southern Arizona.

The area along the trail was lush, green and dotted with blooming wild flowers. And it was on the large, purple thistles in full bloom where I began noticing the occasional wasp with the orange rings on their abdomens.

After passing a couple of these colorful wasps atop a thistle, I stopped to take a picture. As I went on I began to stop and take more pictures and videos with both my camera and iPhone. Everyone in the group was impressed with the wasps but none had ever seen such a wasp. All in all I probably encountered about ten of these wasps.

Flower Wasp Feasting on a Thistle

As I took the pictures my thoughts turned to writing a Hub about the unusual wasp. However, before I could write a Hub I needed to know more about this species of wasp and the first thing I needed to know the name of this wasp.

A couple of weeks after the hike I posted a picture on WebAnswers.com, a site on which I periodically submit posts, asking if anyone could identify this bug. I received three answers the same day.

They identified the wasp as a Flower Wasp and noted that it was also called a Scarab Hunter Wasp by some. One of the postings included a link to page on a website called whatsthatbug.com. That page had a picture of a wasp similar to the ones I photographed along with some additional information about the wasp including its scientific name, Campsomeris Ephippium, and name of the family, Scoliidae, it belonged to.

Flower Wasps are Newcomers to the United States

Flower wasps are found mainly in Central America as well as Mexico and northern South America. Reports indicate that they can be found as far south as Ecuador and as far north as Mexico. However, in recent years they have been showing up in Texas and Arizona.

Most of the information I found was on sites describing sightings of the wasps in Texas and Arizona with the earliest sightings beginning in 2009. Flower Wasps appear to be a relative newcomers to the United States.

I did find three or four sites with a page devoted to flower wasps. Most of these postings had been published within the past 4 years or so and basically described recent sightings of these wasps along with some information about the wasps.

All members of the scoliid family are parasitoids, a term that refers to organisms that spend a significant part of their lives attached to another organism which it lives off of and usually ends up killing.

Like other members of the Scoliidae family of wasps, the Flower Wasp begins life attached to the outer skin of a scarab (beetle) larvae. A female Flower Wasp walks along the ground seeking out scarab larvae living underground. Some theorize that the antennae of the wasp contains chemical sensors that enable the female to detect larvae in the ground.

One Beetle Not Killed as a Grub by a Flower Wasp

Once a scarab larvae is detected, the female Flower Wasp uses her legs to dig down to the larvae which she temporarily immobilizes with a sting. Once the larvae is immobilized, the wasp lays a single egg on the outside of the larvae and then digs deeper and places the larvae or grub in the cavern she has dug.

Sometimes the female Flower Wasp changes her mind after stinging the grub and, rather than laying an egg on it she simply leaves. Like those that have an egg laid on them, the grub recovers but generally fails to develop and ends up dying before morphing into an adult beetle.

As adults Flower Wasps appear to obtain their nourishment from the nectar in flowers. As they travel from flower to flower seeking nourishment they help in the pollination process although compared to bees and other pollinators, Flower Wasps are just minor players.

Both male and female Flower Wasps have corrugated (as opposed to smooth) wings. Males have a more slender body than do females. They also have longer antennae and skinnier legs than do females.

Females have a retractable stinger on their posterior which they use to disable beetle grubs. Males have pseudo stinger - an appendage on their posterior that looks like a stinger but is apparently not operational. This makes sense because it is only the female that has a need for the stinger.

While information on the Internet about Flower Wasps is sketchy with few sites containing more than a picture and minimal text, there are a number of pictures of the Flower Wasp, including one on eBay that showed a Flower Wasp specimen captured in Panama and which was sold to a collector for $12 in November 2014.

Scanty Information but Web has Many Pictures of Flower Wasp

While the Flower Wasp or Campsomeris ephippium may be recent immigrant to the United States, it has been known to American naturalists and insect enthusiasts for almost two centuries.

While researching the Flower Wasp I came across a number of sites with pictures of this wasp. On many of these sites the only text accompanying the photo was Species Campsomeris ephippium (Say, 1837).

Additional research led me to Thomas Say (1787 - 1834) an early 19th century, self taught American naturalist. Like John James Audubon, Say was an artist who traveled extensively in the America of the early 1800s making sketches and drawings of the local fauna especially insects.

One problem with Thomas Say is that he died in 1834 while the attribution accompanying Campsomeris ephippium is dated 1837. However, Thomas Say’s wife, Lucy Way Sistare Say (1801 - 1886) was also an artist and naturalist who made significant contributions to nineteenth century natural history.

Since, neither Say traveled outside the United States, one or both of them was probably responsible for being the first to at least catalog Campsomeris ephippium if not also the first to classify and/or assign its scientific name.

Tree Stump with a Happy Face 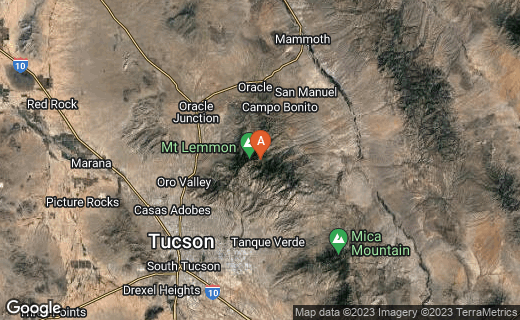 Mt. Lemon in Santa Catalina Mountains above Tucson, Arizona. This is where I saw and photographed the Flower Wasps.