5 out of 5 stars from 1 rating of Medieval Times, Myrtle Beach

Deciding on a Dinner Show in Myrtle Beach

Myrtle Beach offers vacationing families a wealth of fun experiences, including a number of dinner shows. The Carolina Opry, Medieval Times, and Dolly Parton's Pirate Voyage show are a few of the offerings in the area.

Our family was planning a vacation to Myrtle Beach over Spring Break, and wanted to visit a dinner show. With two boys, ages six and four years of age, we narrowed our choices down to two different shows: the Pirate Voyage show and Medieval Times.

Both shows are fun theater experiences, and if we had more time and money, we would have done both. Only one show was in the budget, however, so we had to make a decision: would our boys like pirates or jousting knights better?

The Pirate Voyage show has two seating sections (sapphire and crimson), and features mermaids, sea lions, and swashbuckling pirates. The Medieval Times show has several seating sections (green, yellow, blue, and red, among others) and features horses, mock battle scenes as knights attempt to rescue a kidnapped prince, and a live falcon swooping over the audience. Both shows feature a chicken dinner, which is eaten without utensils.

Ultimately, our decision was swayed by a discount promotion: Medieval Times was offering a buy one, get one free promotion. We purchased two tickets online, and received the children's tickets free of charge. I highly recommend checking the online sites prior to your vacation, to see if there are any special offers. By purchasing our discounted tickets online, we also managed to avoid waiting in line at the theater door to buy tickets. We simply walked right into the castle and received our section color and table number cards!

The staff takes a family picture when you enter the castle, with a nice backdrop. Unfortunately, our four year old son had fallen asleep in the car prior to arriving at the castle, so we did not purchase our family portrait (the cost was approximately $20 for the photo).

While waiting, the king and his royal court perform knighting ceremonies. For children and families celebrating anniversaries, graduations, birthdays, or other special events, the knighting ceremonies are wonderful. My six year old son was extremely excited and loved watching various people get "knighted" during these pre-show ceremonies.

The only negative we experienced in the castle was upon entering the main waiting area. A time share representative swooped upon us and began a sales pitch. This was highly irritating, since we had paid over $100 for a dinner show - we didn't enjoy being detained for a time share sales pitch. My advice to other families attending the show would be to remain curt and to walk away from the time share hawkers. Once you make it into the main waiting area, the sales people will leave you alone. We had received little cards stating we were in the "green knight" section of the castle, at table number 8. Each member of the family was given a green paper crown, representing our knight's color. We did not have a "royalty" upgrade, which gave people a front-row table inside the arena, so we were seated in the third row up. Our table had a perfect view of the arena, and I was glad we hadn't purchased the upgrade to the front row seats.

Each person is supplied with two metal plates, a metal bowl, and a cup. Since the dinner is "medieval," no silverware is provided or used! The dinner menu is printed on the inside of the napkin, and wet wipes are provided after dinner to allow everyone the ability to clean up! The same dinner is provided to all, though a vegetarian option is available (and offered) to those who don't eat meat. The dinner includes:

The only drink options available are soda, diet soda, or water. We normally don't allow our children to drink soda, so if you prefer a healthier drink option to the soda (and don't want water), I suggest bringing a box drink of juice or milk to the theater for the kids.

We knew the kids would probably get messy during dinner, so we dressed them in clothes that we didn't mind getting dirty. The full cup of soda was quite heavy, and our four year old needed help with it (no straws are provided). He also spilled the tomato soup - this wasn't a problem for us, since I expected a few messes with this type of dinner! The kids absolutely loved the flat bread, though they aren't big meat eaters and hardly touched the rest of the meal. My six year old was in love with the apple turnover. For the adults, the chicken was quite tasty, the ribs were good, and we had more than enough to eat!

The show was fantastic for the boys. There is quite a bit of mock violence, so we did talk to our boys about the fact that the knights were actors, and that no one was really hurt during the show. My six year old son was literally on the edge of his seat, jumping and yelling as our knight competed in the various contests. My four year old clapped and cheered every time the horses did tricks. The show has remained the same for quite some time, though a new show will be offered soon (according to some promotional literature in the castle waiting area). This was the first time our boys had ever seen a Medieval Times show, however, so it was entirely new to them. I had seen the show about 20 years ago at the Buena Park castle in California, so I was familiar with the general story line.

Everyone enjoyed the show and the meal, and the boys were literally ecstatic as we left the castle. Our knight turned out to be the traitor, and the yellow knight was the champion at our show. As we left the parking lot, our boys battled with foam swords and cheered as several cars bedecked in yellow flags honked and left the castle. Everyone was really into the spirit of the show, and our entire family had a great time.

The show also sparked our boys' imaginations, as they spent the next several days playing "knights and horses," and my older son even built an entire stable out of Legos when we returned home.

A Hearty Recommendation for Medieval Times

For families with children ages 4 and up, I would recommend the Medieval Times Dinner Show and Tournament. Our children were absolutely delighted by the show, and it was fun for the adults as well. We did not go into the "dungeon" in the pre-show area, as it contains a torture museum that is inappropriate for children, and we did discuss "real vs. pretend" with our children prior to the show, to reassure them that any violence was pretend and that no one was really getting hurt. Our boys greatly enjoyed the show and continue to act out the jousting and horse-riding scenes from the tournament. The only problem we have now is that my four year old insists on becoming a king when he grows up! 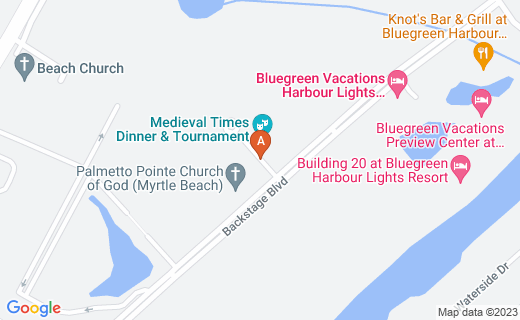