Photos in Memphis, The Greatest Place to Stand Near Elvis

Graceland was chosen by readers of StoodThere.com as the 25th Greatest Place to Stand in the USA, for photography and selfies out of the Top 100 places for 2009. It's the first rock 'n' roll facility to be named a National Historic Place as well.

The Memphis attraction should have its own zip code, because it is so well known, so large at nearly 14 acres, and brings in such a huge amount of yearly revenues. Elvis Presley, decades after his death, is still one of the top money earning celebrities in America.

An all-Elvis Sirius Satellite Radio station broadcasts across the street from Graceland on the Plaza, playing everything from E standards, outtakes, and studio recording sessions for those that cannot get enough of Elvis after his 42 years on earth.

The Elvis satellite radio station is worth the price of the entire Sirius subscription to his fans, offering recordings of material not found elsewhere and more of Elvis's personality than many of us have known before.

Opened to to the public as a tourist attraction in 1982, Graceland was visited every decade by one of my best friends. His most recent trip was in 2002. He had planned a longer excursion with his adult son in 2009, but missed that vacation, because of family illness.

He was one of the most believable Elvis tribute artists I have ever heard, although he performed only at charity benefits like children's' hospital wards at Christmastime. He encouraged people to attend Doug Church performances instead, even purchasing Doug's CDs and giving them as gifts in order to inform more people about Doug, who is in the highest class of Elvis tribute artists we have today. Still, you can purchase any recording Elvis ever did at the Graceland gift shop and online store. 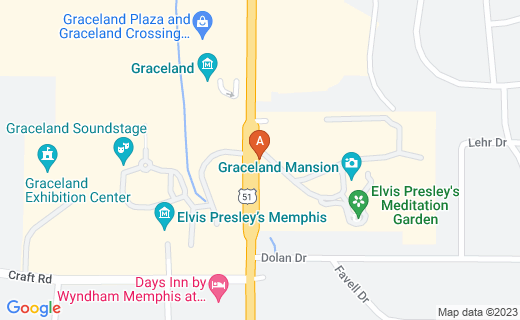 I didn't "get" Elvis Presley in my teenage and college world of rock bands, classical music, and John Philip Sousa marches for football season.

I was driving to work on the morning of August 16, 1977 as I heard in a radio broadcast that Elvis had died. It was a sad event, but the huge candlelight vigils and crowds of fans at Graceland for the viewing were awesome and surprising as I watrched television reports. More people stand by his grave every year now than by John F. Kennedy's and its eternal flame. I began to understand the reasons for this as time passed.

As the years proceeded, I met my friend who visited Graceland once a decade. He was an accomplished musician himself, but played CDs of Doug Church and other Elvis tribute artists he had known in the USAF. I have a few Elvis CDs now, largely gospel songs, but my favorite is one CD of Elvis's and other popular songs that my friend recorded in his Elvis voice.

A few coffee mugs and other Elvis memorabilia decorate my book shelves, having come from the gift shop at Graceland. For a while, my mailing address was on Graceland Blvd. in my city and this spooked my friend as some sort of sign he could not decipher. Regardless, I always enjoyed his stories of the tribute artists he knew and the shows they did separately and together.

The Meaning of Graceland

Many stories and articles have been written about Elvis, Priscilla, daughter Lisa Marie, and all the rest of the Presleys, in and out of Graceland. At this time in 2011, Lisa Marie's own daughter has been a high fashion model for several years, beginning at age 14. The whole family is famous and likely will always be famous.

What Elvis began touched America and the world with some sort of understanding and hope for the working man's and working woman's life and making a success of oneself in a free land. - Can we still do that in the turbulant 2010s? The 15% of Graceland retained by Lisa Marie will likely provide a solid income for generations to come, as the dream of Elvis survives. It is a powerful dream, indeed, if Graceland is a registed landmark of the nation. He and his legacy make a National Treasure.

The former home of Elvis Presley will also provide an oasis and a mecca for fans to cherish as they visit in person and online. The living room is beautiful, the Jungle Room with waterfall is oddly surreal in its 1970s décor, and the Meditation Garden is a favorite of many, many visitors. Travelers write in their reviews that when they stay up the road at the Graceland branch of a chain motel, they walk down to the meditation garden each morning or evening. That's what I would do. Many people stand by his grave for a long time. Many of them miss him personally, even though they have never met him.

My friend Bob's beloved dad Frank died in 1977, the same year as Elvis, and both deaths hurt; but his son was also born that year, close to the singer's birthday. Bob used to visit Graceland about every two years.

In 2012, I think that I must visit Graceland in honor of both Elvis Presley and my friend, also a working class guy that had found the road to success after extraordinary effort and a range of obstacles. He and Elvis both died too soon and I miss them both.

While I don't believe the dead communicate with us, I do believe that angels bring us messages from beyond. Helping his wife clean out the house, I suddenly saw a misplaced recording of my friend in Elvis's voice. She made a copy for me and we went to lunch at a new place. We walked in the door, right into a large statue of Elvis playing guitar and she shouted AHH! We sat in a booth and enjoyed a tasty meal from friendly hosts.

We will probably go to visit Memphis soon