I wrote the book, "Legend of the Bottoms" in 2005, but didn't attempt to have it published. I am presenting it here as a series.

A Visit to Memphis; the Bluff City

There aren't many people who haven't heard of Memphis, Tennessee, with its many monikers, like "Bluff City," "Home of the Blues," "Grind City," and "Birthplace Of Rock & Roll," but in this article we'll explore some of its many tourist destinations, and hopefully, provide you with a better understanding of what it has to offer.

Bass Pro Shops in the Pyramid

You don't have to go all the way to Memphis, Egypt to explore a great pyramid; you don't even have to leave the State of Tennessee. The City of Memphis, which was named after Memphis, Egypt, has its own Pyramid. This Pyramid is somewhat different than its ancestral pyramid in the fact people can actually spend the night in this offspring, and leave with a great bounty of gifts for everyone, that is if you take plenty of money with you, otherwise, you can visit, and merely see the sites inside and outside this modern day steel structure which stands majestically on the east bank of the Mississippi River.

The Pyramid is presently the home of a gigantic Bass Pro Shop store, which not only houses fishing and hunting equipment but includes restaurants, a hotel, bowling alley, archery range, Ducks Unlimited National Waterfowling Heritage Center and an outdoor glass-bottom observation deck, near the top of the 32 story Pyramid. It also has the tallest freestanding elevator in America in the center of its structure.

"Why put a Bass Pro Shop in the Pyramid," You ask? Believe it or not, it came into being because of a 30-pound catfish caught in the Mississippi River by Bass Pro Shop founder, John Morris.

The story, as Bill Dance tells it is that Morris had been considering putting one of his stores inside the megalith for a while, but the determining factor came into play while Dance and Morris were catfishing on the Mississippi River near Memphis. Dance said Morris informed him if he caught a 30-pound catfish that particular day, he would put a Bass Pro shop inside the Pyramid. As fate would have it, he caught one and later fulfilled his promise.

It is a somber note that the National Civil Rights Museum in Memphis was created due to the death of one of the most well-known Civil Rights' leaders in America. The "Lorraine Motel," which would later be part of the museum, was the place where Martin Luther King, Jr. was assassinated by James Earl Ray on April 4, 1968.

The Lorraine Motel was a popular motel during the 1960s for entertainers, that included Aretha Franklin, Ray Charles, Ethel Waters, Otis Redding, and many others that were in Memphis to record their songs at Stax Records.

After the assassination of King, the owner of the motel ceased renting room 306 (where King died) and room 307, and transformed them into a memorial for the slain Civil Rights Leader.

In 1991 the motel became the National Civil Rights Museum, along with 4 acres, including the rooming house where Ray fired the shot that killed King. The museum has over 260 artifacts from the past, along with more than 40 new films, that lead visitors through five centuries of history.

For more information on the museum visit the National Civil Rights Museum online.

A Visit to Graceland: Former Home of Elvis Presley

Almost anyone in the United States and many other parts of the world know that the name "Graceland," conjures up the image of Elvis Presley because it was his primary home from 1957 until his death in 1977. As a matter of fact, he died in one of his upstairs bathrooms on August 16, 1977.

Now Elvis's most loved home has become a shrine to him and his music. It is one of the largest attractions for tourists that visit Memphis and is said to be only second to the White House for visitation in the United States.

The house and adjacent properties contain a vast number of items that Elvis owned, including many automobiles and two airplanes. The mansion was officially listed in the National Register of Historic Places on November 7, 1991, and designated a National Historic Landmark on March 27, 2006. For more information, including hours of operation and tour prices, visit Graceland's website.

A cheap but very interesting destination for tourists visiting Memphis is the Mud Island River Park, located on Mud Island, where The Scenic Wolf River runs into the Mighty Mississippi River.

Some of the exhibits in the park include the Riverwalk, which is a replica of the lower Mississippi River, running its course to the Gulf of Mexico. Other amenities on the Island are the Mississippi River Museum, with a large gallery of times past and the importance of the Mississippi River on the making of our nation. In addition a 5,000 seat outdoor amphitheater, where you and your family can enjoy live shows when they are performed there.

The visit to the park is free, but if you wish to ride the monorail, go inside the museum, or take in a show at the amphitheater, there are fees that can be found, along with hours of operation by visiting Mud Island River Park online. 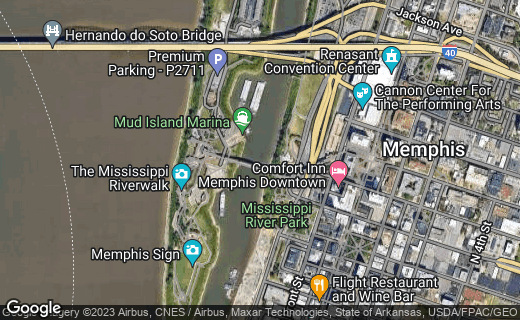 Conclusion of This Visit to Memphis

I hope you enjoyed this brief tour of four of the many great sites to visit in Memphis, and please rejoin us again when we tour more of the Bluff City and visit Beale Street, the Orpheum Theatre, Memphis Riverboat Cruises, Sun Studio and so many more.