We discovered the Merritt Island National Wildlife Refuge while visiting the Kennedy Space Center with our grandchildren, and later returned to Florida's space coast in our RV to spend more time exploring the Refuge and viewing the migrating birds. Merritt Island, on the Atlantic Coast of Florida, is home to the Kennedy Space Center, Canaveral National Seashore and the Merritt Island National Wildlife Refuge. It is also on the Atlantic Flyway, an important bird migration corridor for birds migrating from northern coastal states and Canadian maritime provinces to subtropical climates. Merritt Island is a key resting spot and a destination for thousands of migrating birds that spend the winter in its marshes, estuaries and waterways.

Birds and Wildlife at Merritt Island

In the winter, concentrations of waterfowl at Merritt Island reach 100,000. To date 310 bird species have been identified at the Wildlife Refuge. Some of the birds commonly seen here are bald eagles, wood storks, brown pelicans, egrets, eight species of herons, mottled ducks and warblers. The island also is home to a thousand different species of plants and other wildlife. The Merritt Island National Wildlife Refuge also manages the habitat for 20 species that are on the Federal and State endangered and threatened lists.

If you go to Merritt Island Wildlife Refuge, do stop at the Visitor Center before you go on to Black Point Drive. The staff will tell you what to look for on your drive, and give you a guide to the Black Point Drive scenic loop. The drive is a 7 mile scenic loop through the refuge with 11 kiosks which give information about the wildlife and habitat in the refuge. The drive loops through the fresh and saltwater marshes which are host to hundreds of migrating birds each winter. Birds are easily observed from your vehicle or from one of the many observations points along the drive. Occasionally, otters, alligators or wild pigs will be seen along the drive. The best time to view birds is early morning or late afternoon near dusk.

The wood stork is the only stork that breeds in North America. There is a small and endangered breeding population in Florida. This is a very large bird that stands up to 41 inches tall with a wingspan of 70 inches. We spotted this woodstork and its mate feeding in the marshes along Black Point Drive. The woodstork's diet consists of fish, frogs and insects.

We spotted this gangly and awkward looking bird several times in the wildlife refuge, though it seemed to be a little more wary of us than some of the other birds that paid us no attention.

Armadillos are probably a common sight to residents of Florida, Texas and other southern states, but as Northerners we had never seen one in its natural habitat. The nine-banded armadillo is only found in the mid Southern states, so when we saw one waddling along the side of the road, doing whatever it is that armadillos do, I was very excited. I was amazed that it seemed to have no fear as we parked the car on the side of the road so that I could photograph it. It sniffed along the edge of the road ignoring me as I snapped several pictures of this prehistoric looking creature.

The roseate spoonbill is one of the most unusual and colorful birds seen in Florida. Merritt Island has a comparatively large population of spoonbills, whose bright pink feathers can be spotted easily. Because the coloring is similar, it is sometimes confused with a flamingo though they are actually quite different. The roseate spoonbill has a bald head, red eyes and legs and red wing feathers. The feathers of the neck, chest and upper back are white.

Roseate spoonbills were once endangered because they were hunted for their beautiful feathers that were used to decorate ladies hats in the mid 1800's. As marshes were drained, they also lost much of their natural habitat which put them in further jeopardy. In the 1940s they were designated a protected species and habit was set aside for them. Today they are no longer endangered and their numbers have increased dramatically.

Merritt Island is a wonderful place to view these beautiful birds, and we were fortunate enough to see many of them as we drove the Black Point Drive. Some of the spoonbills were standing in the shallow water hunting for food. Occasionally, we would spot a flock of them flying overhead. On one of our drives, we saw several small flocks perched in bushes and trees not far from the road where they may have been preparing to roost for the night.

The roseate spoonbill has a spatulate bill which it swings from side to side in the water as it searches for food. When it finds food, it will lift its head and let the water drain out of its beak before eating its catch. It feeds on aquatic insects, crustaceans, frogs and newts and small fish.

There are several spots where manatee can be observed on Merritt Island, but the most accessible and best viewing is at the Manatee Observation Deck about 10.5 miles from the visitor center. The best time to see the Manatees is in the spring or fall. Our visit was in March, and we were lucky enough to see manatee come into the area to feed on underwater plants below us. Manatees are herbivores, and feed on about 60 different plant species in shallow waters. They weigh in at about 1200 pounds and can consume up to 10% of their body weight each day.

Later in our trip, we also went to Blue Spring State Park, where, from November to March, the manatee are attracted to the 72° warm water of the springs from the colder St. Johns River. Our trip happened to coincide with a cold snap, and there was a large population of manatees at Blue Springs when we visited. The crystal clear spring water gave us the perfect opportunity to see the manatees feeding, but most fun was watching the cows with their young calves swimming beside them.

Manatees, sometimes called sea cows, are gentle mammals who are mostly vegetarians. They are on the federal endangered list and are threatened by loss of habitat, hurricanes, stress from cold, and red tide. The greatest danger, however is from boaters, and it is estimated that a quarter of manatee deaths are caused by boating injuries. Sadly, they are often struck by boats and boat propellers and sustain serious, life threatening and deforming injuries. In Florida it is against the law to harm or harass manatees, but there are still many cases of accidental collisions with boats that do severe damage.

Other Wildlife on Merritt Island

Like much of Florida, alligators were a common sight on Merritt Island. We would see them lying on the banks or in the shallow water of the marshes. Like many of the visitors to Merritt Island Wildlife Refuge from the more northern states, we were fascinated and very wary of the big creatures. Although they seemed sleepy and docile, we knew from warnings at the visitor center that they could move very quickly.

A large alligator can weigh up to 800 pounds or more and measure 13 feet long. They have bone crushing jaws, and definitely not something to get close to as they can more very quickly in for short distances. Alligators will eat small animals and birds in one bite, but will also attack larger animals and kill them by pulling them under water and drowning them. When young, alligators will eat fish, crustaceans, worms and reptiles. As adults, they will go after progressively larger prey including birds, larger fish, razorbacks, deer, dogs and other larger mammals. In the state of Florida, it is against the law to feed alligators because it causes them to associate food with humans. While alligators are generally docile and do not usually view humans as food, they will attack if disturbed or if they think there is food to be had. I did not need to be convinced to keep my distance!

Another animal we did not expect to see were the razorbacks, feral hogs that live on Merritt Island. Swine were introduced to Florida in the early 1500's by Hernando DeSoto and Juan Ponce De Leon perhaps for the same reason that Columbus introduced them to the West Indies—to provide an easily obtained food source for future expeditions. Feral pigs are omnivores and will eat almost anything including plants, roots, reptiles, and animals including livestock. They can cause much damage to the natural habitat as well as agricultural damage. We spotted several razorbacks rooting in a small open area near the water.

Other Birds on Black Point Drive

We generally took our drives through Black Point Drive in the late afternoon because that was when birds and other wildlife were likely to be out feeding. We spotted several different species of herons, egrets, ibis and numerous ducks, (including the American Coot pictured) and other waterfowl like the colorful Purple Gullinule (also pictured). Merritt Island Wildlife Refuge is truly a wonderful place for birdwatchers and photographers. Often we would meet experienced birders along the route who would kindly help us identify birds we were seeing which was very helpful. Anyone with a little patieces is sure to get some great bird pictures, and if you are there at dusk, be sure to stay to watch the spectacular sunset over the marsh.

If you go to Merritt Island, be sure to watch for the bald eagles that nest in the area. We spotted several in the air, although not close up. I found that having a good guide to birds of Florida was extremely helpful in identifying the birds, though even then, there were several that were confusing as coloring changed depending on the age of the bird and the season.

In addition to viewing the birds and wildlife on Merritt Island Wildlife Refuge, visitors to Merritt Island have the option of seeing high tech spacecraft and the museum at the Kennedy Space Center or visiting the Canaveral National Seashore where they can visit the beaches and swim in the Atlantic Ocean. While there is much to do and see, the island itself does not offer lodging or restaurants, except for a snack bar at the Space Center. Be sure to pack your snacks and lunch when you visit. There are hotels as well as RV parks in nearby Titusville.

Merritt Island and the Space Coast of Florida 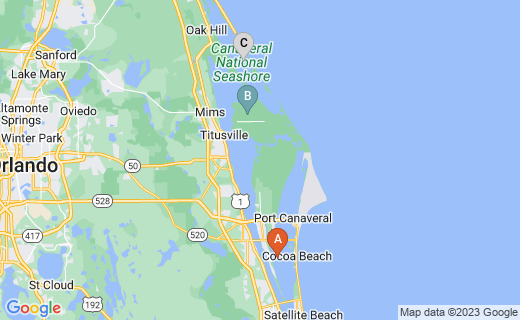 The Wildlife Refuge is a winter destination for thousands of migrating birds as well as for the avid birdwatchers who come to view them.

Florida Authentica: Your field guide to the unique, eccentric, and natural marvels of the real Sunshine State
Buy Now