The Midi-Pyrenees is the largest region in France. It stretches along the Spanish border from close to the Mediterranean Sea to almost the Atlantic Ocean separated from Spain by the Pyrenees mountains. It is bordered by the Languedoc-Roussillon in the East, and the Aquitaine on the west. On the North it is bordered by the Limousin and Auvergne. Toulouse is the one major town in the region with over a million inhabitants. The next largest town is Tarbes with just over 100,000 inhabitants.

There are many idyllic villages in the Midi-Pyrenees; in fact there are more "Les plus beaux villages de France" in this region than any other region. No wonder this region is often described as the most beautiful region in France - take a video tour here. 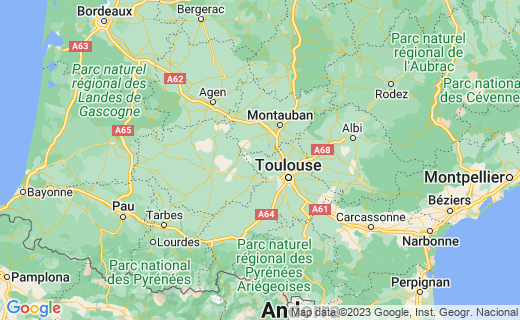 Visits to the Aveyron department should include the pretty villages of Conques and Belcastel and the spectacular bridge at Millau. The dominant feature of the Lot is the Lot valley - check out these villages Gramat, Autoire, Carennac, and Puy l'Eveque. In the Gers (part of the old Gascony area) enjoy the gentle rolling landscapes and the charming villages of Montreal-du-ers, Fources and Larressingle. The medival town of Cordes in the Tarn is well worth a detour. Albi too is one of the lesser known jewels of this department. See the cloisters at Mossac whilst visit the Tarn-et-Garonne. Auvillar comes hightly recommended too plus the bastide town of Montauban. Toulouse is in the Haute-Garonne. The most beautiful village in Haute-Garonne is said to be Saint-Bertrand-de-Cimminges. Hiking and Cycling is very popular in the Ariege - the scenery here is very diverse (from sand lakes to dramatic peaks) but striking! Check out Foix, Montsegur and Mirepoix. Lourdes is in the department of Hautes-Pyrenees. If possible visit the World Heritage site at Mont Perud or the more accessible spa town of Magneres-de-Luchon. In the Summer a popular vacation option is to stay in a Gite. Gites in France are usually fully furnished and equipped for self-catering and often located on farms or rural locations.

Each department has its own tourist board who will be able to suggest places to stay and visit:

Some other places to visit: Typically visitors either come for the Pyrenees mountains in the south, the beautiful tranquil countryside and history of the north, or the calm attractions of the Gers in the centre of the region. One of the most visited destinations in France, Rocamadour is a very picturesque village (see photo above). In the winter skiing is very popular with increasing numbers of foreign skiers.

With improving access to the Region with international flights arriving at Pau, Tarbes-Lourdes-Pyrénées, Toulouse and Rodez, Midi-Pyrenees property has become more attractive. Away from the major towns in the rural areas prices remain cheap. There is huge variety available: from plenty of plots of land to build on, or barns for renovation to chateaux and luxury villas. The Gers and Lot areas are a particular favourite with the Brits.

Weather: Renowned for its warm and pleasant climate throughout most of the year, especially during the Summer months when high temperatures can be observed. During the winter it can be cold with plenty of snow in the Pyrenees. For today's weather and charts: Midi-Pyrenees weather.