I've lived in Arizona for 69 years (Tucson, Glendale, and Sedona). I love writing about Arizona history, antiques, books and travel.

One of Arizona's most interesting and largest cliff dwellings is Montezuma Castle near Camp Verde and Sedona Arizona in the beautiful Verde Valley. The Castle was built sometime between 1100 AD and 1400 AD by Native Americans. For many years, visitors were told it was built by the Sinauguas but now archaeologists are not certain. What is certain, is that the impressive dwelling was built before America was was discovered and it is still an amazing structure. Another guess is about the name, Montezuma's Castle which was thought to be an Aztec dwelling by early visitors. Montezuma who was a native emperor of Mexico, never came close to the region but the name remained.

The large overhang of the a limestone cliff, protected the mud plastered stone walls and timber roofs, and the position of the dwelling, 100 feet above the ground offered protection from animals and enemies. The land along Beaver Creek was perfect for growing corn, squash, beans and cotton. Montezuma Well which is about 11 miles north of the Castle, is a natural limestone sink fed by underground springs. The well probably produced 1,100 gallons per day which allowed enough water to sustain life and to irrigate about 60 acres. The dwellers cut an irrigation system into the rocks which can still be seen today.

The bottom of the dwelling rests upon rock ledges and the upper rooms were built on top of the timber roofs below them. It took expert construction planning to fit the Castle so neatly inside the cliff opening. The builders formed tools from stones, wood and bone. Imagine trying to haul construction materials of stones, mud and timbers using ladders and primitive ropes. Timber from Arizona Sycamore trees formed the main beams, while sticks from Water Willow and Desert Willow, grasses and mud formed the ceilings. Small window openings allowed ventilation and a way to keep watch.

Another Viewpoint of the Cliff Dwelling

Where Did the Cliff Dwellers Go?

Some estimate that 35 to 50 people occupied the dwelling, others are convinced there were more. The tiny rooms had a stone lined fire pit for heating and for days when it was not practical to cook outdoors. The dwellers spent their days gathering and hunting and farming. A cave and smaller rooms located near the main dwelling was named Castle "A" and could have been used for storage or burials, but because the area was vandalized by treasure hunters, the exact purpose is unknown.

There are a number of theories on why the dwellers left and where they went. Some possible reasons include disease or overcrowding or a lack of sufficient game. Some believe that they chose to join the band of Yavapai Apache, while others believe they went north to join the Hopi.

In 1583, the Spanish explorer Antonio Espejo was led to the deserted Castle by Hopi guides. Between the "discovery" by Espejo and 1884, vandals continued to dig looking for pots and other items and they destroyed the clues to the ruins. In 1884, Edgar Mearns, who was a doctor, living at Fort Verde surveyed the ruins and drew maps of his findings. Following Mearns maps, men from the Smithsonian came and performed studies on the dwellings and the area. President "Teddy" Roosevelt declared Montezuma Castle a National Monument in 1906. Later Grace Sparks, a resident of Prescott Arizona, campaigned to add more of the surrounding land and by 1942, the area included 840 acres.

Today Montezuma Castle has a visitors center, and trails that allow a view of the dwelling from several angles. Interpretive plaques explain the construction process. No hiking on or inside the ruins is allowed. Information for planning a visit can be found on the National Monuments website. A visit to the Castle would not be complete without visiting Montezuma's Well. It is also an amazing place. Food and Lodging can be found in Camp Verde or Sedona. 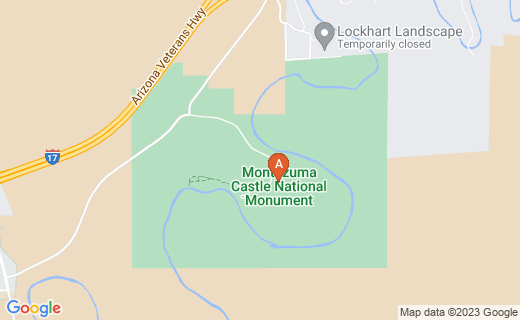