I absolutely love St. George Utah. Originally a small Mormon settlement, it speaks to my soul of history and sacrifice. After the mass exodus of Mormons from the Nauvoo, Illinois area to the Great Salt Lake Valley, Brigham Young, the president of the Mormon Church, assigned several families to leave the valley and colonize many of the outlying surrounding areas. When the Civil War broke out Brigham Young thought that the Mormon people would have a need for cotton, the supply being diminished because of the conflict, so he called several of the Mormon converts who were originally from the Southern States to go to St. George and raise the needed product. Hence the name, Utah’s Dixie was given to the area which is now St. George, and has stuck ever since.

Having been first settled by Mormon pioneers, St. George, Utah is steeped in Mormon history. Among other sights, some of the most popular attractions for anyone visiting St. George would include:

The Mormons are a temple loving people. Their highest form of worship is done inside their Temples, which are considered the House of the Lord. The St. George Temple is the oldest operating temple of The Church of Jesus Christ of Latter-Day Saints. Although Brigham Young commissioned the building of two other temples during his 30-year tenure as president of the Mormon Church, the St. George Temple is the only one that was actually finished during his lifetime.

Made of native red sandstone and plastered white, the St. George Utah Temple stands as a beacon of light among the red cliffs surrounding St. George.

Although the temple itself is not open to the public, the Temple Visitor’s Center, which shares the Temple grounds is open daily and is free of charge. Inside the St. George Temple Visitor Center is a replica of Thorvaldsen’s Christus, which is incredible to see.

Visit the beauty of the St. George Mormon Temple 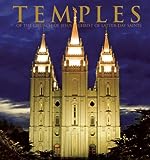 Interior of the St. George Tabernacle

When the Mormon Pioneers first settled St. George, Utah, they needed a meeting house for their everyday place of worship. This meeting house is what is known as the St. George Tabernacle. The struggling pioneers of the area worked diligently for thirteen years to complete this building and today it stands as a monument to their faith and determination. Because of the 1,200 seat seating capacity, the St. George Tabernacle became the town center for most of the community gatherings.  The tower of the tabernacle featured a clock with a bell, that was imported from London, that set the time for the whole town.

Made from the resources that were local to the area, the outside is constructed out of red sandstone. The interior has elegant plastered walls accented with beautiful woodwork trim. The pulpit, which is finely handcrafted, has been used by every prophet of the Mormon Church, when they have spoken from the building, except Joseph Smith. The building is used today for church services, daily music recitals and the weekly Dixie History and Music Series. It is open to the public and is free of charge.

St. George had a much milder winter season than Salt Lake, and for that reason Brigham Young opted to reside there during that time of year.   I guess you could call him one of the first “snow birds”.  The Brigham Young Winter Home has since been restored and furnished with much of the same furniture and artifacts that were part of the original home.  Brigham Young was a great cabinet maker and furniture builder so he appreciated the fine craftsmanship that went into building a quality piece of furniture.  The front portion of the house was built by Brigham Young himself.  Guided tours of the Brigham Young Winter Home are offered daily, free of charge. 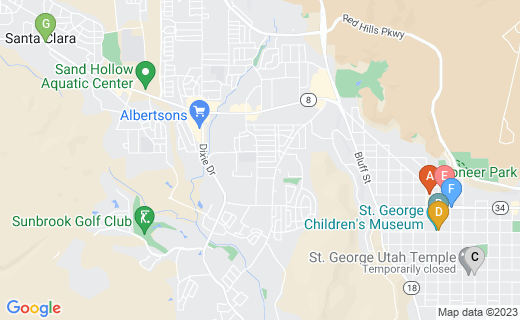 The Downtown Historic District, centered around the intersection of St. George Boulevard and Main Street, is a place to step back in time to the early days of St. George. Among other historic homes, you can visit the Old Pioneer Courthouse, the Opera House, and the Old Dixie Academy. The best way to visit the Historic District is to take the walking tour that begins at the Chamber of Commerce Office.

On the tour you will see the Old Pioneer Courthouse, also known as the Old Washington County Courthouse, which was constructed in 1876. Made of brick manufactured locally, the building has a full basement which served as a jail, a first floor which housed the offices of the county government, and the second floor which was used as a schoolroom and a courtroom.

Also on the tour, built in 1862 as a place of recreation, entertainment, and education, is the Opera House. Elder Erastus Snow was influential in organizing lectures, dances, parties and concerts to perk up the spirits of the pioneers who came from diverse backgrounds and cultural experiences, to the barren land of Dixie.

Typical Home of the Mormon Pioneer in the St. George, Utah area.

A great friend to the Native Americans of the St. George region, and beloved Mormon Pioneer, Jacob Hamblin was assigned to explore the Santa Clara River area which is just west of St. George.  It was there that he built his first home close to the Santa Clara River, unaware of the flash flood dangers of the area. Unfortunately that home was washed away and he wisely decided to build his second one further up the hillside safe from the flooding often associated with that location.  Today the second Jacob Hamblin Home completed in 1863 still stands. Guided tours are free of charge daily.

Jacob Hamblin: His Life in His Own Words
Buy Now

Marking the grave of the victims of the Mountain Meadows Massacre

Just outside of St. George Utah in the area of Pine Valley is where the Mountain Meadows Massacre Memorial is located.  It was here that in 1857, a party of about 140 emigrants bound for California was massacred.  The massacre occurred during a time when friction between Mormons and non-Mormons was heavily felt.  The Mormons bitterly resented the coming of the U. S. troops to enforce federal laws in their territory because of past persecutions that they had experienced.

Earlier that same year Utah had declared independence from the United States, pending negotiation results from delegates sent to Washington DC to dispel false rumors regarding the governing of the territory.  The unfortunate travelers were from Arkansas, Missouri, and Illinois, led by Charles Francher following the popular Spanish Trail to California.

Caught in the middle of the political friction, this innocent party was attacked by a large band of Mormons, many disguised as members of the local Paiute tribe, allegedly accompanied by real Paiutes, led by John D. Lee.

Although the Mormon Church as a whole played no part in the battle, individual members of the church did.  Today there is a dedicated marker in remembrance of the massacre that took place which is maintained by The Church of Jesus Christ of Latter Day Saints.  This is open year round and is free.

Directions to the Mountain Meadows Monument

From St. George drive north on Utah Highway 18 for about 30 miles. Look for the signs indicating the parking lot on Dan Sill Hill on the right side of the road.

From Cedar City drive west on Utah Highway 56 for about 35 miles, to the intersection of Utah Highways 56 and 18.  Turn south on Highway 18 and drive about 11 miles to Enterprise. Continue south about another 5 miles to the Mountain Meadows turnoff.

Just as you begin to drive into the main parking lot for the 1990 monument, there is a dirt road on the left. The dirt road goes to the old monument in the valley that was rebuilt in 1999.

Other things to see when visiting St. George, Utah