Morocco: From the Sand of the Sahara to the Waves of the Atlantic

Last summer I was in Morocco; the country located in North Africa, overlooking the Atlantic Ocean and the Mediterranean Sea. It is a very large country, full of colors, history and hospitable people.I visited the big cities... the capital Rabat, Casablanca and Marrakech. Along the way, I saw other cities, other people, and other languages...

Did you know that in the north, like in the south, people speak spanish? While in the center (in cities like Rabat and Casablanca and Marrakech) they speak french!! Besides the fact that the national language is Arabic. This variation is also known in the culture; to the north the cities have an Andalusian touch, and you feel like you're in Spain ... especially for colors!! Unlike the center, which presents the fulcrum of the economy of the country; places full of companies, offices, industries, and full of people chasing their jobs.While in the south the culture has a sub-saharan touch, with their clothes, with their accent and with their gastronomy. To clarify the fact that many countries do not consider the territory of the "Sahara" belonging to the Moroccan nation, thing due to the historical conflicts, even if the locals feel themselves Moroccans.

The Moroccan people are so hospitable,especially with foreigners ... if you enter a Moroccan house, tea is welcomeness... and their tea is made with mint and it is so good!!! I ate too much cous cous, and in Marrakech I ate "Tanjiya" , and I ate the "moroccan pastilla" too... and I should say that their culinary art is excellent and healthy!!!

In Rabat I visited "Chellah" that's an archaeological site, dating back to Roman times... it was a journey into the past, marked by many variations due to the peoples who resided in the territory. Always in Rabat I visited the "Hassan Tour" and "Mohammed V mausoleum" , where there is also a mosque; I visited "Kasba Oudaia" that is a fortified district of Rabat, located on a rocky outcrop, and it was builted by the Almoravids. The last place I was lucky to visit was the Mohammed VI Museum of Modern and Contemporary Art, that I recommend you visit for its variety of exposure.

In Casablanca I saw the Mosque of "Hassan II" , of immense beauty, with decorations from all parts of Morocco, built halfway across the Atlantic, it seems powerless against the violent waves of the ocean. If you are with your children, the amusement park of "Sindibad", it will be one of your destinations. Last place I was in, it was a Moroccan Restaurant, "Sqala" and I only advise you to go there, not only you eat well, but the environment is wonderful and magical!!

If Casablanca has the "Hassan II Mosque", in Marrakech you can see the "Koutoubia" ... do you know the ancient mosque of Giralda in Seville? The Koutoubia is its her twin tour!!! Always in Marrakech there is the "Menara"! It is a group of gardens recognized by a beautiful building pavilion, and I advise you to visit them! If you are in Marrakech is unavoidable be in "Jamaa el Fna" which literally means the square of arts, and considered the vital center of the city.

Rabat the City of Light, Casablanca the Economic Capital and Marrakech the Red City; wonderful people, magical places, beautiful culture, a red flag with a green star ... this is Morocco!! 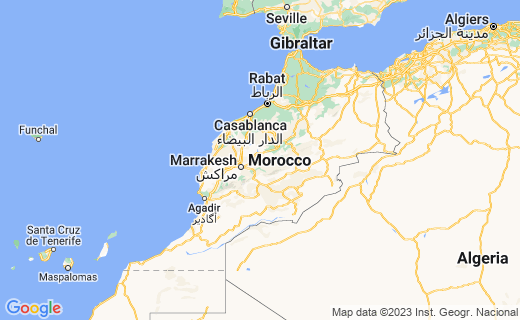