5 of the Most Haunted Places In Tennessee. Visit Only If You Dare!

Late in the evening on Saturday, September 13, 1986, the night clerk and security guard were brutally murdered in the back office of the Rock Top Village Inn in Gatlinburg, Tennessee. Four men were later convicted of their murders.

Local residents and tourists have reported seeing the security guard walking the parking lot, making sure guests' vehicles and the hotel grounds are secure. Sightings of the female night clerk have been reported near the hotel fountain and in the office and unexplained chilling screams have been reported.

Bonus: During the 1970s, in Room 413 (used only for storage now) at the Holiday Inn Sunspree Resort across the road, two young girls were murdered by a man they had picked up at a local bar. There have been reports of unexplained screaming and laughter in the area of the room.

During the Civil War, prominent businessman John Craigmiles was appointed the chief commissary agent for the South. With his keen business sense and taking advantage of his position, John made huge profits on supplies to the Cofederate troops. He understood that paper money was essentially worthless and only accepted payment in gold bars. When the war was over, Southern businessmen who had traded in paper currency were bankrupt; John was not.

All of John's good, although possibly ill-gotten, fortune mattered none on the afternoon of October 18, 1867, as his beloved only child Nina rode with her grandfather on a short jaunt in the family buggy. How the accident occurred no one can recall but it is known Dr. Thompson, the grandfather, survived a collision with an oncoming train. Nina, however, was killed instantly.

Following her funeral, John set about making plans to build a church in memory of his late daughter. The Episcopalians were without a permanent meeting house so John paid for the materials and labor that built St. Luke's Episcopalian Church. Immediately John ordered a mausoleum for Nina to be the first in the cemetery grounds to the rear of the church.

With a crossing sitting atop as the highest point, the expensive marble tomb rises 37 feet upwards from the ground. Inside six shelves were built into the wall with Nina at the center encased in a marble sarcophagus.

The first to follow Nina to the grave was a brother born two years after her death. He lived only a matter of hours before joining his sister without having been named.

Next to follow was her father. John died from blood poisoning, the result of an infection following a horrible fall on ice.

In 1928, Nina's mother joined her after being struck and killed by an automobile.

The blood stain-like marks that formed on the outside of the mausoleum after Nina's interment grew darker with each new occupant. These stains remain visible today.

In the early 1840s, the state of Tennessee purchased land known as Cedar Knob in Nashville as the future site of the Tennessee State Capitol. In 1845, they hired noted Philadelphia architect William Strickland to design and build the structure. When William moved from his home in Philadelphia to Nashville, he had no idea what was in his future.

Often delays occurred because of a lack of funds; other delays were caused by the ongoing feud between William and Samuel Morgan, who had been appointed by the Capitol Commission to oversee the project. The two men hated one another from their first meeting and could often be seen shouting at one another; refusing to cagree on any matter including labor costs and materials.

In 1854 William Strickland suddenly died, his dream project far from completion. After his passing, Tennessee lawmakers quickly passed a resolution providing for William to be buried in a special order vault placed inside the walls of the Capitol. And that is where you can find him today.

The honor of being interred in the Capitol has only been bestowed upon one other person. Ironically, Samuel Morgan is the only other person buried within the walls.

Employees at the Capitol say the men are often heard arguing loudly but when those overhearing the vicious fights look, they find no one there. Most often the ruckus is heard in the vicinity of the north foundation wall - the site of the mens' final resting place.

In 1849, Judge Austin Miller began construction using slave labor on his family's home and it would house Miller generations until the 1970s. Since 1995, it has been known as the Magnolia Manor Bed and Breakfast in Boliver, Tennessee.

Guests to the haunted house have reported seeing an elderly woman wearing an apron; a young woman dressed in Victorian era clothing roaming the house with a candle and sometimes seen sitting in a rocking chair; a white cat that roams the house freely; being touch by an unseen person; and hearing laughter from parts of the home not in use.

The death of 19th century explorer Meriweather Lewis of Lewis & Clark fame is one of Tennessee's oldest unsolved mysteries.

On the afternoon of October 11, 1809, Meriweather appeared at the door of the home of John Grinder, whose home served as a boarding house for travelers along the then-popular trade route that is known today as the Natchez Trace, wet and feverish.

Mrs. Grinder immediately prepared him a room but he refused to rest. Mrs. Grinder would later recount how she could overhear Meriweather behind the closed bedroom door talking to himself, ranting on about his enemies in Washington and how they were plotting against him.

Mrs. Grinder brought her children into her room for the night and as they slept behind a secured door, the lady of the house lay awake beside them listening to her famous yet obviously disturbed guest talk aloud to no one.

Suddenly there was a thump and then the sound of a gunshot rang out. There was a moment of silence before Mrs. Grinder heard the words, "Oh Lord!" before a second gunshot was fired.

Soon Meriweather was at Mrs. Grinder's door saying, "“Oh, Madame, give me some water and heal my wounds" but fearing for her children's safety, she refused to open the door. Watching through the chinks of the logs, Mrs. Grinder witnessed Meriweather fall to the floor where he lay still for a moment before getting to all fours and crawling to the water bucket, trying to draw water unsuccessfully before saying, "“I am no coward. But I am strong, so hard to die.”

But die he did the following day just before sunrise. John Grinder was charged with murdering Meriweather Lewis but it was just as quickly dismissed due to a lack of evidence and motive.

In 1848, a conspiracy theory arose that Meriweather had been murdered by his predecessor James Wilkinson, who had left his position with the U.S. government to build an empire in the then-unsettled west and saw Meriweather's treaties with the Native Americans as an obstacle. Modern day historians however, believe the wounds were self-inflicted; thus making Meriweather's cause of death suicide. He was buried on the Grinder farm.

Murder or suicide, we'll never know but what locals will say they do know is that Meriweather Lewis' spirit remains at the former site of the Grinder home, now nothing but a pile of debris near the Meriweather Lewis Monument at mile 385.9 on the Natchez Parkway. Visitors have reported hearing the sounds of a ladel scraping against an empty water bucket and a man whispering, "So hard to die." 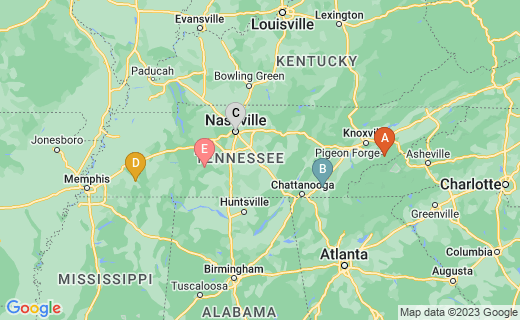