Mount Clare Mansion in Carroll Park, Baltimore Maryland was once the crown of a grand estate overlooking the Baltimore harbor. Built in 1760 by Charles Carroll Barrister, Mt. Clare is Baltimore's oldest Colonial mansion. Open for tours, Mount Clare offers a peek into the 18th century and features furniture and decorative arts of the period, many original to the home.

At one time, the Baltimore harbor could be easily viewed from the hilltop mansion. Terraced gardens led down to the waterfront and the home was surrounded by wheat fields, a vineyard, orchards, a racetrack, and stables. In the 18th century, Mount Clare was easily visible to ships coming into the harbor, and could be seen as a bastion of elegance and status in late Colonial America.

In 1732, Doctor Charles Carroll, a wealthy physician from Ireland, migrated to the American colonies and purchased a large tract of 2568 acres on the Middle Branch of the Patapsco River. The availability of iron ore encouraged Carrol and four other businessmen to establish the Baltimore Iron Works and a shipyard. Carroll's remaining 800 acres not given over to the iron works was called Georgia Plantation, planted with wheat and produce to feed the many employees of the farm, ill, and iron works. Making his residence in Annapolis, the plantation on the Patapsco River was used as a summer home.

After his death in 1755, Charles' son, also named Charles Carroll (a relative of Charles Carroll of Carrollton) inherited the plantation and soon built the mansion to replace the original home. Adding the word Barrister to his moniker to distinguish himself from the other Charles Carrolls of the day, Charles became on of the wealthiest men in the area.

Charles was educated in England at Eaton and Cambridge, returned home, then went back to England to earn a law degree. He returned to Baltimore to manage the estate after the death of his younger brother, John Henry.

In 1763, he married his second cousin, Margaret Tilghman. They produced but a single child, a daughter, who died in infancy. Charles was often in poor health, suffering repeated fevers due to malaria.

Mount Clare was named for Charles Carroll's sister, Mary Clare. The mansion, built to replace the original wood frame dwelling, was in the Georgian style. A popular architectural design between 1720 - 1840, Georgian homes consisted of a one or two story box shaped house, two rooms deep, with a strict symmetrical arrangement of windows, doors, and wings. Single windows were large on the lower floor with smaller upper windows or dormers.

Mount Clare was constructed of bricks made on site with locally dug clay. Unlike many Georgian homes of the period, Mount Clare features a main staircase to the side of the entrance, rather than directly in front of the doorway.

Symmetrical wings extended on each side and included a kitchen, scullery, office, and an orangery, or greenhouse for exotic plants and fruit trees. After entertaining Martha Washington, Margaret Carroll sent orange trees grown at Mount Clare to the Washingtons as a gift.

Some of the attached outbuilding, including the orangery, are long gone.

The palladian style portico was added in 1766.

Today, museum tours allow visitors to view Margaret's boudoir, a small yet attractive room above the entryway that she used to entertain guests. Visitors can see the dining room with its original furniture and china. The rooms are beautifully outfitted in 18th century period style, except for the fabrics. Textiles were chosen to mimic fabrics of the day. Built in shelving displays silver used by the Carrolls. Family portraits, including portraits by Charles Wilson Peale, adorn the walls.

The Dark Side of Colonial Life at Mount Clare

In 1763, the Baltimore Iron Works employed 150 slaves in addition to other workers. During the 1760's and 1770's, food shortages caused by boycotts of British imports created deplorable conditions. One manager reported that people and animal stock were close to starvation.

The hard work of enslaved people allowed the Charles Carroll to live the life of a country gentleman, enjoying horse racing, and hunting.

Mount Clare in the Federal Period

Charles Carroll Barrister assisted in drafting the first State of Maryland Constitution as well as Maryland's Declaration of Independence. He became on of Maryland's first senators.

Originally a summer residence, Mount Clare became the Carroll's permanent home during the American Revolution. After Charles died in 1783, Margaret continued living in the stately manse. During the War of 1812, she would have heard the Battle of Baltimore, as the British bombarded Fort McHenry.

At Margaret's death in 1817, Mount Clare was inherited by the son of Charles Carroll's sister, Mary Clare (for whom the house was named). James, Mary's son, changed his last name to Carroll in accordance to the will.

In 1830, the North East corner of the large estate was deeded to the Baltimore and Ohio Railroad. The Mount Clare Station was one of the United State's first rail road stations.

Later, the property was rented out and used as a hotel, a Civil War encampments, and a German social club and beer garden.

The City of Baltimore purchased the property in 1890. The famous Olmsted Brothers designed a park and recreational areas that included ball fields, tennis courts, and a playground.

Though the majestic elm trees and beautiful gardens are long gone, Mount Clare and Carroll Park remain a wonderful oasis of green space and history for Baltimore and its visitors.

Mount Clare and Carroll Park are located at 1500 Washington Blvd. (See map below) 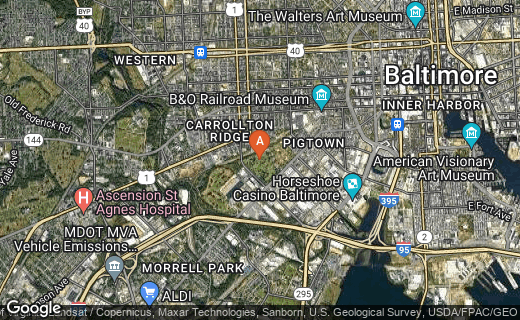 Economics of the Colonial Pre-Revolutionary Period: