Travel and Life In Mulberry, Kansas

This article will include 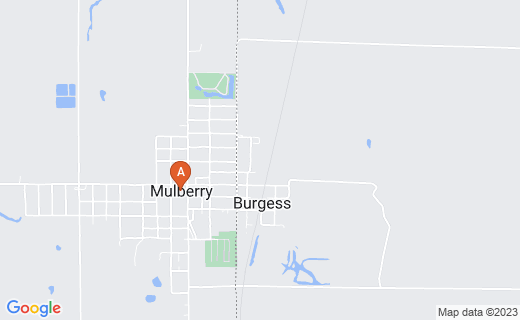 Description and Highlights of the Area

Mulberry sits in Crawford County, Kansas in the Southeast Market Area designated for gathering statistics about employment and business. Mulberry is actually at the Missouri-Kansas state border, near Pittsburg KS.

Sperling's Best Cities lists 573 residents in Mulberry in 2009. The US Census stated in 2000 that the City of Mulberry covered ½ square mile of ground.

If the town were a rectangle, it would 10 city blocks long and 5 city blocks wide, assuming a standard length of 0.10 mile per block. As a square, it would be 0.70 mile on a side and regardless of the shape, you could walk around the perimeter in about 90 minutes at the leisurely rate of 30 min/mile.

The population was recorded as 577, with over 1100 people per square mile. The largest proportion of homes in Mulberry were built in or before 1939.

Mulberry is very small and particularly low-tech, once a successful coal mining town named Mulberry Grove. Residents are largely mid-careerists and younger retirees, ages 24 - 65, with approximately equal numbers below and above age 45.

Interestingly, a higher proportion of the population is Native American than in other US States: 3.3% compared to the usual 0.5% to 0.9%.

Local indigenous people live on the west side of Mulberry, but one square block in the central city is comprised of 45+% Native Americans, the highest concentration in the town.

A Facebook page highlights Mulberry, Kansas and was created by Ken Collins at Mulberry.

Native Americans cared for the lands of the future state of Kansas from at least 6,000 - 12,000 years ago. The Kansa and Osage moved into the area around 1600, followed by the Taos. Others moved back and forth across the lands.

Kansas Territory was settled in the 1800s by thiose moving in from the United States East. The US Federal Government awarded packages of land to homesteaders, displacing Native American populations. Some of these Indigenous People moves further West or South as settlers swarmed into the area, while others were forcibly moved to federal reservations.

Crawford County formed from another county to the north in 1867 after the American Civil War and named for Governor (and US Army Captain) Samuel J. Crawford (1864 - 1868). Governor Crawford resigned in 1868, to become Colonel of the 19th Kansas Cavalry in the Indian War of 1868-69.

The Crawford County Historical Museum in Pittsburg KS contains some records of Mulberry history. They can be called at (620) 231-1440 for additional information.

As part Southeast Kansas, Mulberry will benefit from a portion of the funding allocated to the counties from the US States through the American Recovery and Reinvestment Act of 2009.

Education and Healthcare are the leaders for enhancement, with Infrastructure Projects that are creating new jobs close behinds. Job Training (Employment & Training or E&T), Unemployment Benefits, and related Support Services are, unfortunately, in last position.

Top Ten Job with the Highest Numbers of Increase

These jobs in Crawford County, including Mulberry and a 25-mile radius, are largely categorized as Healthcare, Production, and Services other than Healthcare.

The jobs that are multiplying most quickly include

Considering the years 2009 - 2014, the increase in the first year may not seem to include a large number of jobs, but the jump each year will build a large number by 2014. Stimulus and ARRA 2009 funds will boost those numbers

higher. Infrastructure and Green Jobs will increase, but these jobs were already increasing from 2004 - 2009.

Over 380 Jobs were listed and available in the Mulberry area on April 30, 2009, and the majority of them were related to Healthcare. Specifically, the most jobs were offered in Occupational Therapy in travel positions (more highly paid), other Occupational Therapists, Physical Therapist and Travelers in that field. The Travel Healthcare Field is booming in many US States.

The employers listing the highest numbers of job openings are all heathcare providers:

The Largest Employers In and Around Mulberry

Small businesses make up most of the local employment market, included in the following industry sectors:

Most residents in Mulberry that work commute out of town to nearby communities. Online discussion boards reveal that the city no longer has a gas station or a grocery store of its own.

One University and one State College are within ~30 miles of Mulberry.

From the vantage point of the state border, Mulberry is a quiet city from which to proceed to nearby libraries, museums, State Parks, festivals and celebrations around eastern Kansas and Crawford County, sports, recreation, and local restaurants and scenery, as well as yourist and historical sites in Missouri.