My Travel to Munich, Part 1

This is my first travel hub about Germany and so I decided to visit one of my best friends who is living and working in Munich. The last time I have seen her was when she visited me in Ireland a few years ago. It is the second time I have been in Munich. The first time was in the 80`s and it was only for a few hours that I was glad to have made this visit for a longer time. A short holiday for a week, enjoying days with sightseeing in and around Munich with my friend Celia and later a day out with another close friend Beth, who is living near Chiemsee, Germany.

Munich is the capital of Bavaria. It is an hour and 15 minutes flight from where I live so I took a flight with Air Berlin. There were lots of "first times" in my travel to Munich as it is my first time flight within Germany and alone in a big international airport. I was glad that Celia was there waiting for me outside the arrival area. She took a weeks´ holiday from her work so we had much time exploring the city. She had organized everything and was like my tourist guide as I was only following her everywhere we went and without her I would have been lost in a metropolis like Munich.

Tollwood was the largest summer cultural festival in Europe. It was located in Olympia Park in Munich. It was the 16th summer festival of Tollwood. Participants from all over the world were launching their Bio-products from food to using energy. All goods were cultivated in a natural way without using chemicals. Through Tollwood fair trading of teas, wines, bananas, coconuts, coffees from all over the world were promoted.

I have seen a lot of products from Asia and Africa in Tollwood which reminded me of my early childhood in the Philippines because of the handmade products that I have seen there like coconut carvings in different use. Flowers, animals, toys that are made from coconuts and woods.

Tents and stalls with international foods and drinks from all over the world besides the Bavarian cuisine and beer. Tents with different kinds of music from jazz to pop with lively audiences where we were able to dance just by standing on our place for it was full of people especially tourists like me with cameras in our hands. Olympiapark was built to host the Olympic Games 1972 which ended tragically because of terrorist act, costing the deaths of many people. It is located near the BMW Building across the Autobahn (highway) through an overpass bridge. There are many events taking place in Olympiapark like Tollwood, Open Air Concerts, Sports in many ways, picnics in summer season and just a place to relax on fine sunny days. A 300 meter high television tower is located on this park where most of the events are transmitted worldwide.

Olympiapark is a meeting place for all people with different cultures and traditions. It is in this park that I have seen many arabian women wearing there clothes with only eyes could be seen and behind them their Filipino maids carrying their Christian Dior or Luis Vuitton packages from shopping.

BMW Werk, Museum and Headquarters are just near the Olympiapark. It is mostly visited by the tourists who are interested in quality cars. There is always an exhibition of beautiful BMW´s and their new technical developments. Marienplatz is St. Mary´s Square in English. It is the centre of the city where you can find a lot of shops and where important festivities and demonstrations are being held. It was a market place in the Middle Ages but then the market was transferred in the early 19th century, now called the Viktualienmarkt.

The Glockenspiel, the Fish Fountain, the Mariensäule, the old and the new Town Hall are in Marienplatz. The Glockenspiel is a chiming clock at the New Town Hall and it is the most fascinating tourists attraction that is so magical in the whole Marienplatz. The bells chime at 11 a.m., 12 noon and at 5 pm daily on the month between March and October. It chimes about 15 minutes with the bird chirping at the end of the play. This clock is usually chiming (outside the normal schedule) during a special event like celebrating a successful tournament. Some local or tourist people just come extra at that time to witness the Glockenspiel.

Frauenkirche is the largest church in Munich with a Gothic architecture. It was built in the late of 15Th century whereas the two towers were added to the church in 1525. If you climb up to the top, you can see the Alps on a clear and sunny day.

As what I have heard from the tourists guides, the Mariensäule ( Marian Column) was built in 1638 as a celebration for the end of the Swedish Power under which Germany was occupied by the Swedes on that 30 years war. The column was built as a reminder of the plague in 1634 where thousands of local people died. Four baroque symbols of plague (basilisk), war (lion), hunger ( dragon) and snake for not believing in God are on that column.

Asamkirche is also called St.John Nepomuk Church. It was built by the two Asam brothers who wanted to have a private church for themselves but was forced to let the people come and pray inside this catholic church. It is one of the most beautiful churches I have seen besides the Sistine Chapel in Rome. It´s architecture is Baroque and Rococo style. 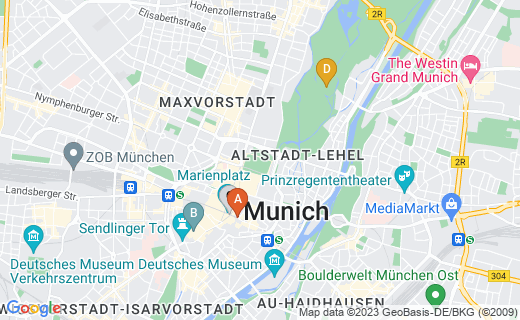