This is the second part of my Munich travel as it would have taken too long if I had written all at once. There are at least 9 churches in the city of Munich as it was listed in a flyer about churches in the city. I have only visited 4, the Frauenkirche, St.Michaelskirche, Asamkirche and Theatinerkirche. The most beautiful for me was the Asamkirche which I have mentioned in the first part of this travel hub.

Theatinerkirche is an Italian style of church which was built in the middle to the end of 17th century. It´s beautiful mediterranean design and in yellow color added to the baroque style of the German architecture. Some of the Wittelsbachs family are buried inside this church as well as some other Bavarian electors and their families. King Otto of Greece who was exiled in Germany was buried here in Theatinerkirche.

Visiting a museum is one of my habits, traveling to other places like Munich and the weather was good for a visit as it was raining the whole day. My friend and I visited only 2 museums, Glyptothek and Alte Pinakothek.

Glyptothek is a museum which has a collection of Greek and Roman Sculptures. It is open everyday besides Monday from 10 a. m. to 5 pm with a €3.50 entrance fee. The sculptures are very awesome. Some of the sculptures have no heads, legs, arms or torso.

Alte Pinakothek is one of the most important and popular museums in the world. It houses the paintings of the worlds popular painters like Rembrandt, Rafael, Rubens, Tizian, Leonardo Da Vinci, Dürer and many others. We had a four course menu. The waitress who was dressed in her Dirndl, a typical Bavarian folk dress which has an apron tacked on the dress, was very friendly serving us. We had a Radler (beer mixed with Fanta) for a drink. We did not order a mass (liter) of beer, which is usually served for a hearty Bavarian meal because we are not used to it and we might not be able to find our way to the tram, bus, S-Bahn or U-Bahn on our way to Celia´s flat. That would be horrible. We were already laughing so much on the streets while walking. How much more if we had drunk a mass of beer?

The first course we had was a delicious spicy Schweineschmalz spread like butter on our brown German bread, then the roasted spicy onions and some round sliced raw onions on top of it. Yummy... It was great! I was already full after eating it. So we drank the Radler slowly to push down the first course. Thank God the waitress always asked us if we were ready for the next course. There was no hurry. As we were ready for the second course, the waitress brought us the Liver dumpling soup. Oh my, it did taste good. Again we took our time consuming the soup. We were having a conversation while eating. It is unusual for a German to talk a lot while eating.

The third course was the heavy but hearty meal of our dinner. It was roasted pork with potato dumplings (Klöße), Sauerkraut and brown gravy. Our tammies were bulging with Bavarian cuisine but we still continued eating but left some pork to save the place for the Apfelstrudel which was our desert. Slowly but surely we were able to finish our meals within almost two hours.

Eating in this Altes Hackerhaus restaurant was the most enjoyable dinner that Celia and I had. There was no hurry because we had our dinner in the late afternoon and there were not many people inside. I know now that when I visit my friend again, I will be having my dinner with another Bavarian menu like Schweinshakse (Half a crispy roasted pork knuckle) with potato dumplings and Sauerkraut...Guten Apetit!!! 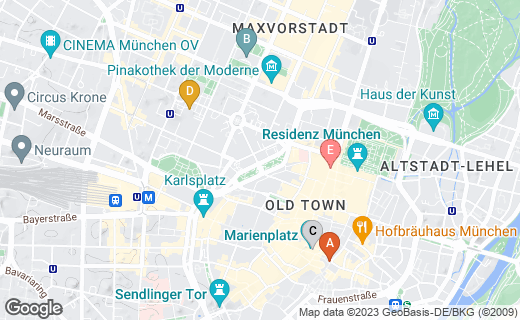