Transportation in Munich is very good. My friend Celia and I kept on commuting with bus, tram, U-Bahn ( underground train) and S-Bahn (railway train). Of course I was following her wherever we went for she is an expert with this kind of traveling inside and outside Munich. As there were always transportation vehicles, we did not have to wait for long. We just had to choose which one we had to take.

Driving in Munich with your own car can be tricky as it is difficult to find a parking place and it is expensive. I bought an IsarCard ticket for using all methods of transportation for the whole week and it costs only €14.80. So it was a sort of adventure for me visiting a place like museum with a tram, then going out and driving an U-Bahn and then going out and getting into a tram. I was sometimes confused but happy enjoying the ride like a small child.

Another Places To Visit

Viktualienmarkt is located not far from Marienplatz but near to St. Peterskirche (St. Peter Church). It is the oldest but the largest market in Munich. There are many stalls that are selling different kinds of vegetables, flowers, and fruits from the local farmers and from different European countries. Meat butchers there have shops below the church. The foods that are sold here are of high quality and I have heard that the prices are high compared to a supermarket.

Hofbräuhaus is a Bavarian restaurant and one of the most popular beer houses in the world. It is always a must to go to Hofbräuhaus when you are in Munich. It is the meeting place for beer lovers and typical Bavarian food are served here like Weißwurst (white sausage) with homemade sweet mustard, roasted pork with potato dumplings and Sauerkraut.

When Celia and I went inside, I was hit by the smell of the beer and the smell of the Sauerkraut. The atmosphere was good although full of tourists who wanted to taste the Bavarian cuisine. Me on my part, was feeling drunk from the smell of the masses (liters) of beers that the tourists were drinking. It felt like I was drinking as well. After taking photos inside, my friend and I went to another place. English Garden (Englischer Garten in German language) is a large garden located near the city center and it is open to the public. It is called English garden because the style of this garden is informal. According to wikipedia, it was created in the late 18Th century by an English man Sir Benjamen Thompson and this garden is larger than the Central Park in New York.

The English Garden has a Chinese Pagoda and a Japanese restaurant. The garden is really large because there were a lot of people jogging, cycling or just strolling around without disturbing each other. As it was the beginning of the week and the weather was very changeable, the beer garden was not full.

The landscape of the garden is very beautiful with a lake that added to the beauty. I have heard that on a hot summer day some people are sunbathing in the park, naked. I was told about it but have not seen one maybe because of the wet weather.

Hofgarten is a garden near to the city center and to Odeonplatz. It is one of the most beautiful garden in the city where my friend and I took a rest. It was late afternoon when we had our dinner at the Altes Hackerhaus restaurant. As we were so tired walking the whole day and very exhausted from our very hearty dinner, we decided to go to the Hofgarten for a rest. This garden is different from the Englische Garten for the flowers are in rows. There is an order of the plants growing in lines.

After our rest in the Hofgarten, we slowly but joyfully walked to our next destination which was home for me for one week. Celia and I went to the U-Bahn and then to the S-Bahn and walking a few steps until we arrived in the cosy flat of my friend. Another day was fruitfully gone. The next day is another day of adventure.

Sources: Wikipedia and Flyers of Munich I love Munich, You Tube Video 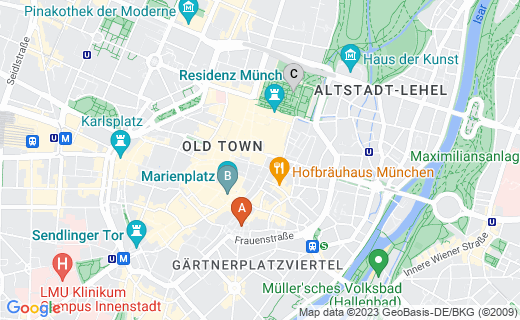 The oldest and largest market in Munich.

Marienplatz is in the city center where you can see the Glockenspiel. It is the meeting point of all the tourists visiting Munich.

The city garden of Munich.