A Quick Guide To Madrid Spain

Located in Retiro Park, the Palacio de Cristal is probably the most famous 19th century greenhouse and exhibition space in Europe.

Organized by the Museo Reina Sofia, a gigantic sculptural group created by acclaimed Spanish sculptor Jaume Plensa is currently on show within the transparent setting of glass walls.

The designer, Ricardo Velázquez Bosco, used the Crystal Palace in London, designed by Joseph Paxton and built a few decades earlier for the Great Exhibition, as a prototype.

Unfortunately, London’s palace was destroyed by fire in 1936.

Madrid's art scene isn’t just about the past.There are also plenty of places, such as the Matadero, showcasing emerging artists. Located in the Arganzuela district of Madrid, a 10-minute subway ride from Puerta del Sol, Matadero is a true wonderland for culture lovers.

The former slaughterhouse was turned into a culture space in 2006 and now hosts exhibitions, theater and dance performances, and concerts – most of them for free. A similar picture can be found at La Casa Encendida, a cultural center that strongly supports young artists.

You might like to explore the San Miguel Market. Originally built in 1916 as a traditional market, in 2003 it was obtained by private investors and turned into the stunning glass-covered gourmet market it is today. While some may say it’s too touristy, the atmosphere is very laid back and you can spot a lot of locals.

Order some fried calamari from the masters at the El Señor Martín trolley, which serves fried Andalusian seafood, and nab a spot at the communal wooden table to enjoy the buzz around you. Madrid is a paradise for market fans.

Eat Some Tapas in Madrid

This are the place to try authentic tapas in Madrid

Located next to the Royal Palace, this family-run, century-old tavern is a perfect example of a tapas place. Think marble countertops, tiled walls, chandeliers, professional service, and a wide selection of drinks and tapas. Order a vermouth de grifo (Spanish vermouth from the tap), and in the blink of an eye an enticing plate of alioli potatoes or other lip-smacking tapa will come at you.

Meaning ‘Tavern of the Mushroom’, the name explains it all. This hole-in-the-wall bar is renowned for its grilled mushrooms soaked in olive oil and topped with parsley and heavenly drops of chorizo. Dare to also try its flash-fried Padrón Peppers, nicknamed Russian Roulette due to the fact that you never know which of the bunch of peppers will be really hot.

Opened in 1892, this is a living legend that’s constantly full of local tapas-goers. Three things have not changed since the day the bodega first opened: the red façade, the monumental wood-paneled bar, and the excellence of its tortilla de patatas, also known as the Spanish omelette.

A food house, a vermouth bar, and a wine bar all in one, Gran Clavel is a place where you can linger for hours while gazing out the large windows that open on to the busy Gran Vía.

Reminiscent of 1960s Spanish elegance, the establishment looks like a Wes Anderson movie set. Settle in at the vermutería, savor some of its refined selection of vermouths from all around Spain, and treat yourself to a plate of traditional tapas that has been given a sophisticated spin.

Watch A Flamenco in Madrid

There’s no better way to get a feel for the Spanish soul than by watching some flamenco. Las Tablas is one of the top flamenco venues in the city, founded by the pioneers of Madrid’s flamenco scene, dancers Antonia Moya and Marisol Navarro.

Las Tablas hosts two shows every day, at 8 pm and 10 pm. Prices vary, depending on whether you want to accompany the captivating performance with a drink, tapas, or a full meal.

My personal favorite is Corral de la Morería, one of the best spots in the city to watch a performance, with tickets sold as a dinner-and-show package. It doesn’t get any more Spanish than this. 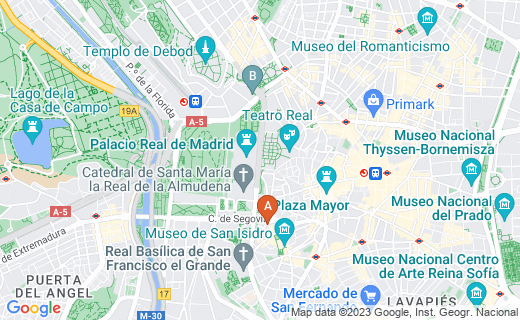 With over seven thousand paintings, including famous works by Spanish masters such as Francisco de Goya and El Greco and a vast collection of European artwork, there’s a reason why the Museo del Prado, Spain’s national art museum, is listed among the best museums in the world.

The Prado is also home to Las Meninas by Diego Velázquez, an intriguing painting with a painting within a painting that should be on every art aficionado’s bucket list.

Have A Picnic In A Park

125 hectares and more than 15,000 trees are waiting for you at Retiro Park. This green area is located in the middle of the bustling city, and you can choose to sit in one of the several gardens or in the famous French Parterre, which has the oldest tree in Madrid, a 400-year-old bald cypress.

The park entrance by the Casón del Buen Retiro is one of most peaceful areas to enjoy a nice early-afternoon picnic. In the middle of the park is a small pond surrounded by the Palacio de Velázquez and the Palacio de Cristal.

On the park’s larger lake you can rent a small boat for about six euros and enjoy a romantic ride in the evening.

West of downtown Madrid is the Casa de Campo, the largest park in the city and one of the most popular places among Madrileños, as residents of Madrid are called. The park has many picnic areas with long wooden tables and also a number of bars around the lake where you can enjoy a drink and a traditional tapa.

If you want a most relaxing time, enjoy an amazing sunset in the Parque de Oeste in the quiet atmosphere next to the Debod Temple, an ancient construction moved from the Nile Valley and rebuilt in this park in 1972.

The temple is temporarily closed, but the green area surrounding this piece of art is the best place to enjoy the sunset in good company.

Spend time at Madrid’s Matadero and risk immediately becoming a devoted fan of independent contemporary creations. This former slaughterhouse was converted into a massive cultural hub in 2006.

It’s a city within a city composed of various different multidisciplinary venues and performance areas.

The acrid smell of cigarettes may have disappeared, but the walls of La Tabacalera, a former tobacco factory in Madrid, are still standing tall. The destiny of the plant in the Embajadores district changed in 2003, when the Ministry of Culture decided to give part of the abandoned building a second lease of life as an artistic and cultural space. Ever since, it has been hosting temporary exhibitions and organizing workshops with a focus on photography or contemporary arts, as well as concerts.

There is a strong community atmosphere there, the sort of place where young talent and visitors alike can come together and express their creativity. The building has a second role as the social center of the Lavapiés neighborhood. A real laboratory of ideas, counter-culture and admirable practices independently managed by the locals themselves.

The place is completely democratic where anyone from anywhere can come and experience art, debate ideas and attend social and well-being sessions. Stroll through its maze of old cellars which have sprung to life as pop-up art galleries with floor-to-ceiling street art. Artists can pretty much do as they like, giving free rein to their creativity and making the most of its one-of-a-kind freedom of expression.

Wander along to one of the center's two courtyards and enjoy a bit of sunshine between the tomatoes and lettuces of the community vegetable garden! The outdoor tables are made from recycled wooden pallets and the customized armchairs from salvaged bits and bobs. 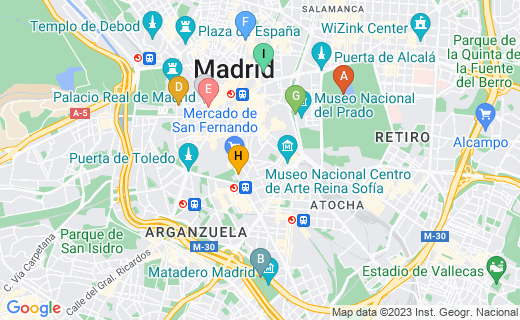 Madrid is on my list of places to visit