California has a rich collection of state parks many of which preserve the state's interesting history. Some are located in the heart of urban areas, such as Old Town San Diego State Historic Park, while others are out of the way, like Bodie State Historic Park. All are worth seeing and add a piece to the Golden State's rich historical legacy.

Bodie State Historic Park. Located north of Yosemite National Park about six miles from the Nevada state line at 8,375 feet above sea level the high and dry sage hills harbor a ghost town built on the riches of gold. Bodie is not the scrubbed and sterilized park which typifies a turn-key ready place for tourists. Rather it has a surprising degree of authenticity in that the buildings are crumbling, dilapidated testaments to the past. Dust and dirt occupy most of the buildings if not all. Established in 1859 Bodie thrived just after the main California gold rush of 1848. Bodie once had an unsavory reputation as one of the most lawless, decadent, and corrupt towns in the West. In 1880 the town boasted a population of 8,500 and 2,000 buildings as well as a large Chinese minority. By 1886 the town's population was down to 1,500 and fires further diminished the town's presence. By the 1940s the last of the residents moved or died off. Today it teems with visitors, mostly in the summers, as the town can receive up to six feet of snow in the winter and the last three miles of road into the city are dirt. The entrance fee for one adult is $7.00 (August 2013). Access is from US 395 to S.R. 270.

Columbia State Historic Park. Nestled in the western foothills of the Sierra Nevada, this park epitomizes the California Gold Rush. Almost like a time warp the beautiful Main Street section of this small town brings you back into a bygone era and demonstrates, as much as possible, what life was like during the great California gold rush between 1848 and 1855. Most of the 30 buildings were built during the Gold Rush and the park was established in 1946. Workers are dressed to the period and the park offers stagecoach rides and other working exhibits. The park has been the backdrop for numerous film venues including High Noon (1952).

El Presidio de Santa Barbara State Historic Park. One of four presidios originally built in Alta California, the presidio in Santa Barbara is the best preserved. Located within walking distance of downtown Santa Barbara, the presidio features original buildings, some restored, as well as a museum. Founded in 1782 the Royal Presidio at Santa Barbara was mostly built to protect the fragile Spanish settlement in Alta California from other colonial powers in the area such as the British and Russians and to provide support for the string of missions along the El Camino Real. Today white-washed buildings retell the presidio's history. Entrance as of August 2013 is $5 per adult.

Fort Ross State Historic Park. Fort Ross was the cornerstone of the Russian presence in California south of Alaska from 1812 to 1841. It served as the most southerly outpost of the Russian-American Company's activity in North America. It also gave the Spanish pause as they quickly built missions as far north as San Rafael and Sonoma to repeal potential rivalries in the area. Today it exists as a beautifully reconstructed park that interprets the history of the Russian extension in this part of the world. The only original building, the Rotchev House, c. 1836, sits among a collection of other reconstructed buildings which include the Russian Orthodox chapel, the stockade and four other buildings. Entrance fee as of August 2013 is $8.00 per vehicle. The park is located in Sonoma County along US 1.

Monterey State Historic Park. Monterey was California's capital under Spain, Mexico, and the United States so it's no surprise that the city has a beautiful historic park. Located in downtown Monterey, California, Monterey State Historic Park has an assortment of buildings connected by a walking path which interpret the city's rich historic past. The walking path takes the visitor past buildings which include the Spanish, Mexican, and American historical periods of the city's past with Monterey Old Town Historic District. The most famous buildings include the Freeman Adobe, the Customs House (c. 1821, Mexican), the Larkin House (c. 1859), Cooper-Molare Adobe, California's first brick house (c. 1847), Colton Hall (1840s), arguably the first capitol of California as a state in the Union, the Old Whaling Station (c. 1855), First Theater (c. 1845), the Stevenson House (1820s) , the Pacific House (1847), Casa Soberanes (c. 1840s) , Casa del Oro (c. 1849), and the Sherman Quarters (c. 1834). The park is free of charge and guided tours are available. Bring appropriate walking shoes. Also of historic interest in and around the city, but not part of the park, is the Royal Presidio Chapel, perhaps the city's oldest surviving building, Cannery Row, and Mission Carmel.

Old Town San Diego State Historic Park. San Diego has a strong claim as California's oldest city and its origins can be found in this beautiful compact historic park just off the junctions of I-5 and I-8. It was here beneath Presidio Hill where the city sunk its first roots in 1769. The oldest structure in the park today is the Casa de Estudillo (c. 1827). Other notable buildings, all built around a central square, include First San Diego Courthouse, the Steeley Stables, and the Robinson-Rose House, which hosts the visitor center. Of great interest although not within the park is the c. 1857 Greek Revival Whaley House, about one block away, which is said to be haunted. It is one of the city's notable historic attractions for that reason (entrance fee). If time permits take the short drive to Presidio HIll overlooking Old Town San Diego which has good views. It was on this site where the city's original presidio stood. There is no entrance fee to the state historic park but parking can be hard to find so plan accordingly.

San Juan Bautista State Historic Park. Between the beaten paths of US 101 and 156 you will find the charming and peaceful town of San Juan Bautista. Overlooking the endless agricultural fields it is situated just on the first fold of hills and ominously straddles the San Andreas Fault. It was also along the El Camino Real and along with the Mission San Juan Bautista, built in 1797, the town grew up. Today the State Historic Site covers a number of buildings around the charming town plaza most notably the Castro House and Plaza Hotel (c. 1814). The Mission is not part of the State Historic Park although it's the town's historical centerpiece and sits adjacent to the state properties. Interesting facts about the town include ts backdrop in the scenes in Alfred Hitchcock's Vertigo (1958) starring James Stewart and Kim Novak. The town also has an official rooster or two which roam at will - so slow down in the streets.

Santa Cruz Mission State Historic Park. Located in the popular beach community of Santa Cruz the rebuilt and preserved Mission Santa Cruz is one of three out of the 21 which is state-owned. The original church building has long since been destroyed but a faithful half-size replica now reinterprets the mission's history. Founded in 1791 by Franciscans the missionaries from Spain who sought to convert the Ohlone Indians. The Holy Cross Mission Church sits on the original site, rebuilt in 1889, and remains an active parish church. The rebuilt replica, state-owned, was completed in 1930s and serves a a chapel as well. One surviving building remains of the original mission and that was formally a dormitory for native acolytes. Admission is free.

Sonoma State Historic Park. Built around the Mission San Francisco Solano, the Vallejo Home, and the Barracks the Sonoma State Historic Park is very significant in the transition of California from Spanish to Mexican to U.S. rule. The Sonoma Mission was the last of the twenty-one California missions and the only one built under Mexican governance. It was also in Sonoma where the state's Bear Flag originated. The Blue Wing Inn dates to 1837 and represents the typical Spanish-Mexican adobe architecture of this period. It functioned as the first hotel in California north of San Francisco along with other uses including a saloon, parlor, and grocery store. Guests who stayed here included William Tecumseh Sherman, John Fremont, Ulysses Grant, and Kit Carson. The Sonoma State Historic Park is located in downtown Sonoma centered around the charming town plaza. Docent guided tours are available.

The Spanish Missions of California 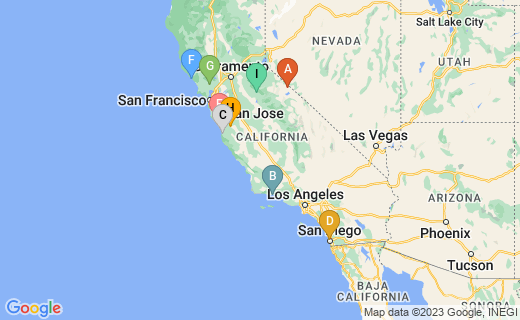