My Visit to the Louvre; Paris, France

I decided I would walk from Fouquets on the Champs Elysees boulevard to the grand Palace of the Muses, the magnificent Musee de Louvre. The Arc de Triumphe sits at the opposite end of Champs Elysees and the Louvre is the resplendent capstone in all of its French glory. It was a beautiful day in July and I had heard so much about the Louvre, I knew I wanted to tour it on my own. There is something about art and history that belongs to the masses and yet something profoundly personal about observing it for the first time.

Before entering the grand walkways and walking through the arches, I stopped to admire the beautiful fountain at the Place de la Concorde, in the center of a round about. While walking through the Tuileries, which I had seen so many times in paintings, I understood why so many spend leisurely time sitting near the fountains. People taking a rest, locals reading or pretending to read the newspaper with their little dogs near them, children floating small toy boats in the water, couples embracing; it is a painting come alive.

I entered the famous Louvre Pyramid and took an escalator down to the sunken court where I bought my ticket. It is flooded with light from the 666 glass panes of the pyramid designed to illuminate with natural light. It was quite crowded and people were everywhere. There are additional entrances that can be found here, which are not as congested. There were people from many cultures and I could hear various languages being spoken. Once you have your ticket and map, there are escalators which take you to different wings of the enormous structure. It is wise to have a plan before you start wandering.

Ceiling Panel Inside The Louvre

Learn More About The Lourvre

Palace of the Muses

There are three different wings on four floors. There is the Richelieu Wing, Sully Wing and the Denon Wing. There is the Lower Ground Floor, Ground Floor, First Floor and Second Floor. It is impossible to see everything with one visit so I had to decide which areas I most wanted to visit. They were having a special exhibition at the time of pencil drawings by Leonardo de Vinci, so that was certainly a must see and it was incredulous to see these amazing works displayed.

Just to give you an idea of the treasures that are housed at the Louvre, I will list the different categories which can be seen and enjoyed.

I started with oriental antiquities from Mesopotamia on the ground floor in the Richelieu wing. The first cities, states began to emerge with the Sumerians 2450 B.C. Writing began as they used sculpture to carve hieroglyphics as a form of communication. It was marvelous to gaze at these objects of the builders and warriors of a society. I marveled at the hierarchy of power established so early in life. There is a limestone relief of Ur-Nanshe, 2500 B.C., who was the founder of the I dynasty of Lagash (modern day Iraq), with a basket of bricks on his head commanding his troops as they trample on the bodies of their enemies. He was what is known as a builder-king. I walked through this wing in awe, marveling at the detailed intellect of these people preserving their history and beliefs. It is the earliest known civilization and this area is now known as the cradle of civilization.

From Aphrodite to Winged Victory

I then wandered into the Denon wing and found the Greek and Roman antiquities. The most famous piece in this wing is Aphrodite, also known as Venus de Milo. The Greek goddess of beauty was carved from marble around 100 B.C., which is known as the Hellenistic era. I had taken courses in college of Art History and Classical Humanities and remembered learning about much of what I was now seeing. It was a very humbling and awesome time for me realizing the significance of history and the importance of preservation.

In the Sully wing I discovered the Egyptian antiquities. The Egyptians preoccupied themselves with preparing their soul for life beyond. The room is filled with beautiful, colorful, detailed, sarcophagi (coffin), stelae which resemble raised tombstones. They are covered with painted rites of passage to be followed, which would include a magic formula, scenes of burial, daily life after death, prayers addressed to the god Ra-Horakhti. They are life size, and quite elaborate and beautiful. Everything is symbolic. I leave this area with a piqued curiosity about the mysteries of the great beyond and, perhaps subconsciously symbolic, walk upstairs to the first floor.

As I continued walking, I saw her, the monumental statue of the goddess, Winged Victory, or Nike, in Greek. It was unearthed on the small island of Samothrace in the Agaean Sea in 1863. She graces a prominent place in the Denon wing at the top of a beautiful staircase. It also is carved from marble. Wings are unfurled, celebrating a battle. Wings also symbolize the connection between heaven and earth, gods to men and men to the beyond. She is gorgeous and many are taking photographs, including myself. There is a connection made with the divine as I walk down the stairway.

A Gift to the World

My visit to the Louvre, in some respects, was like a dream. I remember stopping at times and gazing at the lifelike statues of gods and goddesses or looking through glass at a silicon ceramic peacock dish with decoration painted under glaze found in Turkey (1540 B.C.) I realized where I was, but everything around me was from another world, another time. (Lucky for me, I kept a journal and took photographs.) The Musee de Louvre truly is a gift to the world. 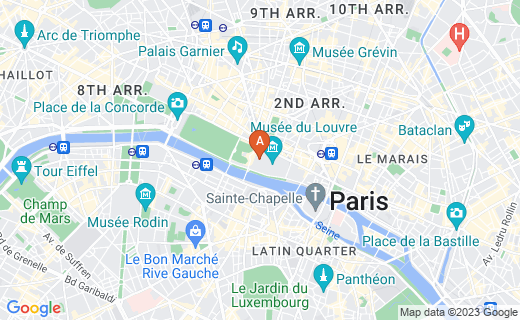 Thank you for reading and please feel free to leave a comment.