White crosses leading up a mountain path are a mysterious and fascinating sight I get to see from the bus window every time I travel through the village of Santiago del Teide, and so seeing as I love walking in the countryside I decided I would make a trip there to spend some time investigating this picturesque location in the Canary Islands..

The Virgin of Lourdes

At the entrance to the pathway there is a yellow and white painted humpback bridge and a sign, which informs us that this is the "Camino de la Virgen de Lourdes," which I translate as the pathway of the Virgin of Lourdes. As it happens, I live in Edificio Lourdes so it was as if it was telling me something - it was a sign from the beyond and I set off up the path.

All along the edges I could see an incredible variety of wild flowers in bloom, just like I used to see in meadows in Britain in the bygone days of my youth and childhood. This is how it should be I was thinking, and positively delighted in all the wealth of colour and difference in size and shapes I could see on both sides of the walkway.

There were red poppies, purple vetches, white catchflies and bladder campions, tiny starry yellow hawkweeds, various dainty trefoils and the bobbing heads of some very pretty grasses. It was like Heaven in a patch of grass!

I spotted a pretty purple-flowered unknown species of squill and even saw some Wall Pennywort (Umbilicus rupestris), a plant with rounded glossy leaves, which give it its name and it was a plant that I didn't know grew here until I saw it there at the foot of the dry stone wall at the edge of the path. I had only walked a short way uphill from the bridge and was already in a botanist's paradise.

I reached the first of the white crosses that are staggered along the route and I was wondering about what religious celebrations the path is used for. A large colony of ants was using the path too and for them it made a splendid highway. I made a point of avoiding stepping on the busy little creatures, some of which were carrying seeds and bits of vegetation and others were the larger soldier ants that were guarding their companions.

To the side of the pathway flowering bushes of a white Viper's Bugloss (Echium sp ), or Tajinaste, as it is known in Spanish, were attracting the plentiful bees, as were the strange starry cone-shaped inflorescences of the Houseleek (Aeonium urbicum). I had seen all the recent news of how honeybees are dying out fast in America and was pleased to see the ones on Tenerife are still doing fine.

I stopped to have a look at some fluffy Haresfoot Trefoil (Trifolium arvense) flowers and noticed some baby grasshoppers in amongst the short vegetation. This pathway to the Virgin of Lourdes was home to many insects as well as having all the beautiful flowers along its borders, and she was their guardian, I thought.

As I carried on up the path I stopped to look on back down at the village and cars on the road below. There were people in the streets and I could hear the bells of the local church summoning the faithful but I was a lone walker on the pathway leading on upward. Eventually I reached the end of the path and a most beautiful shrine to the Virgin of Lourdes.

A figure of the Blessed Virgin is the focal point, framed in the recess of an archway of flowers. There were roses and geraniums and also exotic plants and flowering cacti in little pots too and you could see that the shrine is looked after well and a place where pilgrims come and leave rosaries, and objects of devotion. Inside the shrine it was cool and the paving stones were damp with water that trickled and the place felt holy.

Stepping outside I saw a large bell, which hangs down over the main part of the shrine. I started thinking about how someone must ring this as the signal for pilgrims to start ascending the rugged pathway that I had just climbed.

I wanted to get some photos before I left but it was then that I discovered that my camera wasn't working properly and I actually got to feeling that maybe some mysterious force objected to me taking snapshots in such a sacred place. I realised later that it was a case of new batteries needed but it had me wondering for a while!

Footnote: This story first appeared in the Tenerife Sun as My religious experience on a mountainside . 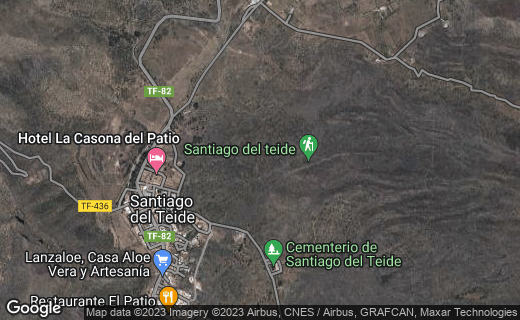