My wife and I enjoy traveling and spending time at our camp on a lake in Maine. Sharing the beauty and wonders of Maine is our passion.

Our youngest son, Andy, was in rural Mexico for 4 months participating in an archeology dig under the supervision of a professor from California State University, Fullerton. Andy enjoys traveling but not being a tourist. He journeys to foreign countries, learning their cultures and studying their history. He has been to Senegal, Peru, and Belize. For him, this was an exciting opportunity to participate, hands-on, in something he had studied in college. A chance to travel to a foreign country, and best of all, spend an extended period of time living and working with the local people. This would be an all-immersion, rather than an all-inclusive, trip. His excitement was tempered only by the fact that he spoke no Spanish and would have to supervise a team that spoke no English.

I too saw this as a great opportunity. I would be able to visit my son doing something he loved. I could visit a country and see and do things the average tourist would never have the opportunity to experience. I had to balance my interest in seeing Andy and an active archeology site with my concern regarding travel in Mexico and the fact that I also speak no Spanish.

The decision was made. The airplane ticket was bought. The adventure would begin, but not until the extensive planning process was completed. For the details of my planning see "How I Prepared For And Traveled During My Trip to Rural Mexico".

Olmec was established along the Gulf Coast around 1200B.C. The first notable culture in Mexico, it is often referred to as the 'mother culture' because of its influence on later civilizations such as Mayan and Aztec.

Their principle locations were at San Lorenzo and La Venta. San Lorenzo was destroyed about 900B.C., but why and by whom is a mystery. About the same time, La Venta, to the east, reached its peak. A thousand years later, Olmec civilization was fading into obscurity.

Today, the culture is associated with the colossal carved stone heads that were fashioned from massive basalt blocks weighing up to 20 tons.

La Venta is a major Olmec archeological site in the Mexican state of Tabasco. A prominent civic and ceremonial center for the culture around 900BC, it was essentially abandoned for unknown reasons around 400BC. It is located on an island in a coastal swamp, east of the Tonalá River.

Unlike Mayan and Aztec structures, Olmec structures were built of earth and clay. Large basalt stones from the Tuxtla Mountains were used to build monuments such as colossal heads and "alters" (thrones).

With the development of the southern end of this area into a petroleum refinery, many of the relics were moved to the Parque-Museo de La Venta in Villahermosa for preservation. The refinery made further exploration difficult or impossible.

Los Soldados, 4 miles down a dirt road through pastures and woods, is a small rural village on the west shore of the Tonalá River. It is less than 10 miles south of La Venta. This area has been inhabited, on and off, since about 900 BC. If the regal elite lived in La Venta, it is possible that commoners lived in Los Soldados.

The proximity of Los Soldados to La Venta made it a logical location for an archeological dig. This was the CSU, Fullerton professor's second trip to Los Soldados.

The village, with an active community, offered few public areas to dig. Many of the archeology units were on public land, particularly on school or church property. A few units were on private property along the river. Not long after I left, underwater archeologists were brought in to explore select locations on the river bottom.

Los Soldados, the School and Village

Still a location for commoners, laborers and fishermen, Los Soldados is a village of 400-500 people with modest houses to shacks, schools, 2 or 3 churches and 4 or 5 "stores". While the locals enjoy the modern conveniences of electricity, street lights, satellite dishes, and cell phone service, much of their infrastructure consists of dirt roads, outhouses, water wells and cisterns.

Despite the austerity of the village, the students at the public elementary school were dressed in neat, clean, white shirts with matching navy blue pants, skirts, or shorts.

Agua Dulce is a city with a PEMEX refinery and an agricultural component supporting the local economy. Andy lived here in a modest house with 3 other student archeologists. Sam, a graduate of Penn State University, Alejandro and Miguel, both undergraduates at Mexican universities. The professor and Jess, a graduate student from Albany, lived in a house down the street.

The house was 4 rooms, 2 bedrooms and 2 common rooms. It had a bath with a sink, toilet, and shower, but there was no true kitchen. In the back common room was a table with a large bottle of drinking water, a hot plate, and a coffee maker. Furniture for their short stay included a few tables and plastic chairs. Without air conditioning, there were fans everywhere.

Andy's house was less than a 1/2 mile to the traffic circle, bus station, high school, and BodegaAurrerá. The Bodega, as they referred to it, was a store much like Walmart. In fact, it is owned by Walmart. Like a Super Walmart, there isn't much you could need that you couldn't buy here. From groceries to clothing to electronics, it was all there.

Like several locations along the gulf coast in the United States, this area of Mexico depends heavily on the petrochemical industry.

Coatzacoalcos is a large port city on the Gulf of Mexico. With a quarter of a million people, it is the 3rd larges city in the state of Veracruz.

While not a major international tourist area, it appears to be developing into a destination for Mexican nationals. With more restaurants, retail outlets, and hotels springing up just inland from the beach, upscale housing developments are following close behind. Four large petrochemical complexes are located here as well as the headquarters of the state-owned PEMEX petroleum company.

Minatitlán, an industrial city, is built on reclaimed wetlands and also home to a large refinery.

Veracruz, My Portal to Rural Mexico

Veracruz, Mexico's oldest, largest and historically significant port, is a major port on the Gulf of Mexico. With many historical sites and resort areas, it is a popular tourist site. It is home to an international airport.

Map of Some of the Areas I Visited 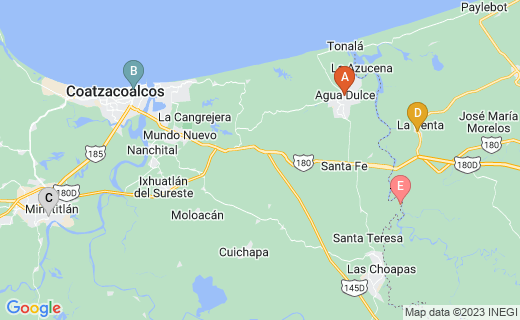 The trip was quite an experience. Neither AAA nor Abercrombie and Kent would have planned and carried out my trip. Nervous and obsessed in my planning, I never felt threatened or uncomfortable in Mexico. The people were friendly and helpful. It was great to experience their life rather than that of a tourist.

The people associated with the archeology dig, professors, student archeologists, and local workers, were friendly and made every effort to make me feel comfortable and included. They were more than willing to tolerate my very limited Spanish while practicing their limited English.

I was particularly impressed with the school children. The ones at the dig were polite and interested in what we were doing. All of the students, from grade school to high school, wore uniforms. Their uniforms were a clean, neat white shirt or blouse with pants, shorts, or skirts in the associated school pattern. They looked as if they attended a private school in the U.S. rather than a public school in rural Mexico.

I hope you enjoyed the photo journal of my trip to Mexico off the beaten path. If you would like to learn more about how I planned my trip you can check out "How I Prepared For and Traveled During My Trip to Rural Mexico".

How to Get a U.S. Passport

If your are planning a trip to Mexico or anywhere out of the country, you will need a passport. "How to Get a U.S. Passport in Time for Travel" by KrystalID will give you all the information you need with step by step instructions on how to get one.

Write Your Own Articles