Albeit there are several beautiful places on this earth, I always dream myself to be in Jammu & Kashmir, the extreme part of North India. Several friends of mine have visited this lovely place and their photographs drag me to this nature’s paradise in my dreams. In my teen days, the Hindi movie ‘Kashmir ki Kali’ also took me to this heaven with its enchanting picturesque locations. This question, ‘where would your ultimate dream vacation be?’ from the honorable hubber 'crazyhorsesghost' immediately made me think about Jammu & Kashmir that I had wished to write a hub about.

Jammu & Kashmir is composed of three regions: Jammu, the Kashmir valley and Ladakh. While Kashmir valley is famous for its beautiful mountainous landscape, Jammu's numerous shrines attract a lot of Hindu pilgrims every year. Ladakh, also known as "Little Tibet", is renowned for its remote mountain beauty and Buddhist culture.

In this hub, I would be listing the various popular tourist spots of Kashmir Valley, Jammu and Ladakh. I would be describing them in my later hubs.

The Kashmir Valley or Vale of Kashmir is a valley located between the Karakoram and the Pir Panjal Range in the Indian state of Jammu and Kashmir. It has an area of about 135 km length and 32 km width, flanked by the Jhelum River. Mughal Emperor Jehangir called Kashmir, “Paradise on earth”.

Many Bollywood movies have been shot here, of which those starring Shammi Kapoor became popular super hit. Many of the songs have heroines in Kashmiri dress, shikaras in lakes, flowersellers and Mughal gardens as the scenic backdrop.

1. Verinag Spring and Mughal Garden- A fresh water spring Verinag, the chief source of Jhelum River and a Mughal garden next to it.

2. Srinagar – Summer capital of Jammu and Kashmir, a popular hill station. It is here where Kashmir’s core beauty lies. Lakes, houseboats, gardens, flowers and other lovely scenic spots together make it to be called, ”Venice of the East”. Some of the breath-taking sights of Srinagar are

3. Gulmarg – meaning ‘meadow of roses’ is a popular hill station and skiing destination.

4. Pahalgam – is a town famous for its health resort.

5. Betaab Valley- A lush green valley 15 km from Pahalgam where the movie Betaab was shot with dense green vegetation and snow-clad mountains.

6. Sonamarg – yet another splendid country facet of Kashmir valley

7. Aru – A scenic valley popular for its meadows, mountains and a trekking base for Kolhoi glacier.

Jammu City is the “City of Temples” that anchors a big set of Hindu temples and shrines in the higher altitudes. With hills and valleys, Jammu’s panorama is beautiful with the incessant blessings of Gods residing here. The famous ‘Vaishnom Devi Mandir’ is situated in this heavenly place that gets visited by enormous devotees each year. The terrain of Jammu is formed by The Pir Panjal Range, the Trikuta Hills and the low-lying Tawi River basin. The Pir Panjal range separates Jammu from the Kashmir valley. The majority of people of Jammu are called Dogras and they speak the Dogri language. Major hillstations and temples of Jammu are:

Ladakh, meaning land of high passes has Kunlun mountain range (Karakoram) in its North and the great Himalayas in the South as boundaries. This sparsely populated land has Indo-Aryans and Tibetan descents as inhabitants. The remote mountainous beauty of deserts with Indus River meandering in between having bright hues sketched in some interior spots makes Ladakh, a truly exotic extravaganza. Buddhist Chortens and monasteries bless the place with a peaceful ambience. The main attractions of Ladakh are:

3. Lake Moriri - one of the largest and high altitude lakes in the Changthang plateau.

5. Zanskar – the most isolated valley of all the trans-Himalayan valleys.

6. Gurdwara Pathar Sahib – This beautiful Sikh temple is built on the memory of the founder of Sikhism, Guru Nanak.

The beauty of Jammu & Kashmir is far beyond words. Each single spot inside the precincts of this naturally lavish, ornate place is a tourist destination. As Sri Buddha could find the truth in his search of salvation of mankind, the Buddhist culture prevalent in Jammu & Kashmir would be the reason for making it, ‘a paradise on earth’.

A song clip from the movie Junglee

Which movie song shot in Kashmir do you like most? 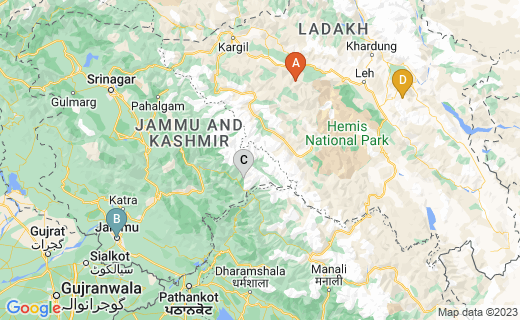