Indonesia is a culturally-rich country, with over 17000 islands, it houses more than 300 ethnic groups. Each of these ethnic groups has their own belief system, some of which keep mystical stories. Let's take a peek of a few mysterious cities that are strong with their mystical tales.

For some, it's known as the Equator City because it's located right at the equator. For others, the city is called after a traditional ghos, kutilanak, because it's full of paranormal sightings of the ghost. Kuntilanak, or also called pontianak/matianak in some dialects, is a female vampiric ghost who is believed to be the spirits of women who died while pregnant.

The place used to be a kingdom and its first king, Sultan Syarif Abdurrahman Alkadrie, was disturbed by a ghost of long-haired woman wearing long white dress. He and his men were clearing an area for a new settlement, by cutting down the tall punti trees, when he saw the ghost. From then on, people speculate that the area is called Pontianak because it refers to 'the child of the ponti trees'.

Another mystical city that is located in West Kalimantan is Padang 12, which is -by those who can see it- said to be a very modern luxurious city, more advanced than any city in the world. "Padang 12" is not an official area, it's a name that refers to a seemingly empty plot of land covering 12 square km located in Ketapang, 30 minutes from Pontianak's Supadio Airport. The locals believe that the lot is not actually empty but inhabited by 'Orang Kebenaran' or literally 'the True People'.

Those with paranormal abilities claim that there's a mystical society lives in the area, populated by human-like beings with a cleave between their nose and mouth. It is said that they often interact with the locals, often doing trades and asking favour and in return they'd pay the locals gold in turmeric shape. The city itself is a gleaming modern city with high skyscrapers which are very much like Dubai.

Saranjana is a mystical kingdom located on Halimun Island at the tip of Borneo Island. You won't find it on Google Map because the word 'Saranjana' exclusively refers to this invisible kingdom.

There are many mysterious stories surrounding the island, like unexplained disappearance of locals, and music coming from a hill on the island. Many tourists vouched to have seen buildings and human activities on the island, but when they came nearer, there are only trees on it. The locals believe that the residents of Saranjana are djin, beings that were created from fire in Muslim beliefs and have been around for thousands of years.

Yogyakarta is crowned as Special Region in Indonesia and not without reasons. The city is strong with traditions, most of them related to the mystical world. There are esoteric rituals like the Heirloom Washing Ceremony, and First Suro celebration. First Suro is the new year in Javanese calendar and considered as a sacred day.

Yogyakarta is also a home to sacred areas like Mount Merapi, Gunung Kidul and Parangtritis Beach. Parangtritis Beach is supposedly ruled by Queen Nyi Roro Kidul, and since her favorite colour is green. If anyone who visit the beach wears anything green, she'd take a liking to the person and will carry the person into her palace under the water. Visitors to these places are advised to treat them with respect. Even if you're a non-believer, it's always wise to follow the local rules.

This small city in Central Java is known as the City of a Thousand Paranormals due to the high number of shamans who reside there. Many people come to this place to do various metaphysical practises like pesugihan, an infamous method to get rich quick through ritual and sacrifice.

The city also has a long history of spiritualism which heightens the mystical atmosphere of the city. Many respected Muslim figures who believed to have strong spiritual energy lived and died and buried there. Some of these figures are Sunan Makdum. Sunan Kalijaga, Sunan Kudus.

In addition, in the area of Mount Patiayam dozens of years ago, a 'clan' was established by Nyi Senggoropati. The person who died in 1987 at the age of 110 was a teacher for most of the paranormals who are now actively practicing in Pati. Today, the city is home to Paguyuban Paranormal Indonesia or Indonesia Paranormal Association. 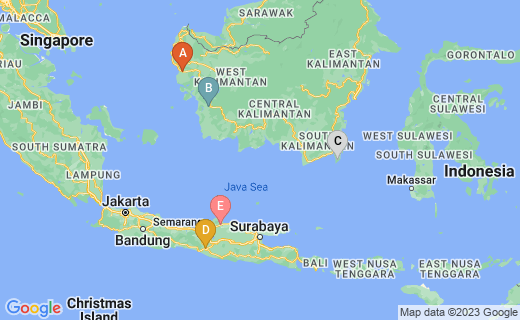