Fort Robinson is one of the crown jewels of the Nebraska State Park system. Located on 22,000 in the beautiful Pine Ridge area of northwestern Nebraska, the Fort also offers some of the most fascinating history of any place in the state.

In 1873, the Red Cloud Agency, home to roughly 13,000 Lakotas, was moved from the North Platte River to the White River, near what is now Crawford, Nebraska. In 1878, the agency and its accompanying military encampment were moved once again, 1.5 miles west to its current location. The new fort was named Fort Robinson and it became one of the most important sites in the later Indian Wars.

Buffalo Bill Cody killed his first Indian - a scene he would later re-enact hundreds of times in his famous Wild West Show - at the Battle of Warbonnet Creek near Fort Robinson in 1876.

In 1877, the famed Lakota leader Crazy Horse surrendered at Fort Robinson, and was killed there later that year during a botched attempt to arrest him.

The Words of Morning Star

All we ask is to be allowed to live, and live in peace... We bowed to the will of the Great Father and went south. There we found a Cheyenne cannot live. So we came home. Better it was, we thought, to die fighting than to perish of sickness... You may kill me here; but you cannot make me go back.

In one of the Fort's saddest chapters, the Cheyenne chief Morning Star (also known as Dull Knife, his Lakota name) and his band of about 300 men, women, and children were held there without food, water or heat during the winter of 1878-1879, after escaping from poor conditions on their Oklahoma reservation and fleeing 600 miles north towards their ancestral homeland. The tribe attempted once more to escape, but was massacred by federal troops in January 1879. Morning Star was among the survivors. His son, George Dull Knife also survived, and later survived the massacre at Wounded Knee as well.

The Dull Knife Massacre was the last major incident in the Indian Wars in Nebraska and after the arrival of the Buffalo Soldiers (one of the nation's first African-American regiments) in 1885, Fort Robinson was used primarily as a military fort, rather than an Indian Agency. In World War I, it was the world's largest Quartermaster Remount Depot, and in World War II it was used as a K-9 training center and a POW camp for German prisoners of war.

In 1948 it was retired from use as a military fort and given to the US Department of Agriculture to be used as a beef research station, but in 1955, the Nebraska Game and Parks Commission acquired part of the fort and turned it into a state park, which it remains today. It was declared a National Historic Landmark in 1960.

The park is located on 22,000 acres of beautiful Pine Ridge scenery and offers lodging in the 1909 enlisted men's quarters, in cabins, or in the campgrounds, which include sites with electrical hookups, group sites, and equestrian facilities.

You can take trail rides, jeep tours, or a stagecoach ride, participate in a bison cookout and singalong, hike or bike the park's miles of trails, take in a play at the playhouse, visit the Fort Robinson Museum, maintained by the Nebraska State Historical Society, and much more!

The park has a bison herd and a Texas Longhorn herd, and visitors can also expect to see pronghorn, deer, elk, bighorn sheep, coyotes, wild turkeys and other wildlife. 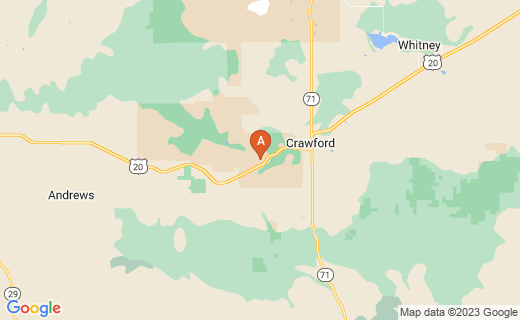