South Addition essentially lives up to its name: it is a community that serves as an extension to downtown Anchorage, Alaska. The residential community is nestled between the bustling streets and highways of the city’s urban center and the wide ecological expanse of the state’s south-central coast.

With nearly 4000 residents (3,842 to be precise), South Addition is one of the city’s most populated neighborhoods. It is also one of its most exclusive.

It is home to some of the best educated and affluent citizens in Alaska’s largest city. The community is not big on attractions or businesses – then again, it is located near some of Anchorage’s most important geographical features.

Interestingly, portions of its borders incorporate off-shore Knik Arm, north of Turnagain Arm – the main waterway in the area. Whether this watery portion of the neighborhood will be reserved for dredging or for a future harbor is hard to say (Then again, the coastal area within South Addition is an undeveloped mudflat).

Some of Anchorage's local historical landmarks can be found in this neighborhood. South Addition is the home to one of the first residential homes built in the city. This structure (which was rebuilt to its “pristine condition” in the late 70s and early 80s) is now the Oscar Anderson House Museum.

The structure -- he built in 1915 -- is considered the first wood-frame house built in the area.

Oscar Anderson – the original owner of the home – claimed to be the 18th person to set foot in what would become the city of Anchorage. The structure -- he built in 1915 -- is considered the first wood-frame house built in the area.

Today, the fully restored home/museum can be found on M Street in Elderberry Park and is open to the public between mid-May and mid-September. Also, it is listed with the National Register of Historic Place.

There are only a handful of businesses within South Addition's boundaries. Snow City Café, Skinny Raven Sports, and Anchorage 5th Avenue Mall are the closest to the community.

These businesses can be found on 4th, 5th or 6th Avenue just west of C Street. The restaurant, Simon and Seafort on 5th Avenue is one of the few places within its borders.

South Addition may lack the presence of a financial districts or businesses. It does, however, more than make up for this by containing many open spaces and natural features.

With the trial and the makeshift hockey rink, South Addition is a neighborhood that offers its residents and visitors something for all seasons

Valley of the Moon Park and Delaney Park are the largest parks in the area. Also, there is a bike trail, Tony Knowles Coastal Bicycle Trail, which runs along coast. The trail leads to another attraction, Westchester Lagoon.

During the winter months, Westchester is frozen. It’s also during this time the lagoon’s northwest portion is used as an outdoor hockey rink. Often, the Youth Hockey Tournaments are held on its surface.

With the trial and the makeshift hockey rink, South Addition is a neighborhood that offers its residents and visitors something for all seasons. 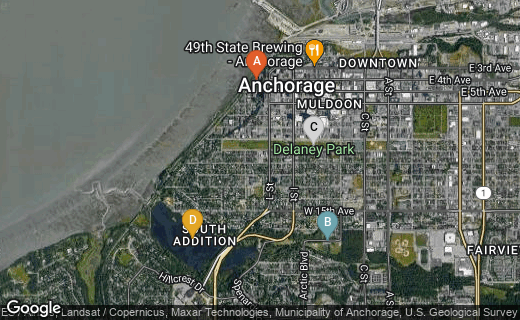 One of the oldest structure in the city of Anchorage. Now, it's open during the summer months as a museum. Tours are offered.

One of two large parks in the region.

One of two parks in the region.

During the winter, parts of Westchester Lagoon is converted into an outdoor hockey rink