Things to Do at the Southwest (SW) DC Waterfront

Having lived in the Southwest quadrant of Washington, D.C. for three years, I've come to love and appreciate this little-known neighborhood. The quiet and charming neighborhood, located just a mile south of the Capitol is full of history, offers relaxing pastimes and is going through a major revival which has led some to regard it as an under-appreciated gem.

When someone mentions the southwest waterfront, they usually refer to the area south of the National Mall and just south of South Capitol street, although the quadrant actually contains five different neighborhoods, which are: Buzzard Point, the Southwest Federal Center, the Bolling Air Force Base and the obvious Southwest Waterfront.

I used to love running along the water (Washington Channel) nearly each morning with other runners greeting me while on their morning run. Fort McNair is just south so lots of soldiers run along the marina as well. This area is beautiful and is one of the only places in the US that has people living in houseboats. Along this marina are restaurants, the Titanic memorial, and one of my favorites, the fish wharf. Another favorite is Cantina Marina, which is a restaurant/bar that has a patio and deck with great views, music, drinks like strawberry daiquiris and they even allow dogs in!

The most familiar place at the DC waterfront is a theater, Arena Stage, the Mead Center for American Theater. This theater has been in this location since 1960 and has won many awards. It went through a major renovation from 2008 to 2010 and there’s no better time to go there for a show then now.

There’s the Maine Ave. Fish Market, which locals refer to as “the fish wharf”. This place is fabulous for Chesapeake Bay crabs, oysters, clam chowder soup – all are which sold out in the open air and can be eaten right there. It’s a bit of a secret from tourists whom are seldom seen here. An interesting fact about this market is that it is the oldest continuously operating fish market in the United States.

Across the Washington Channel is Hains Point, which is a great retreat especially during DC’s muggy summers. On this island, you can play golf or tennis, have a picnic, or perhaps just watch the planes take off from Ronald Reagan Washington National Airport, which is just on the other side, across the Potomac River.

Then of course there’s the National Cherry Blossom Festival, which is a must if you’re in town when the trees are in full bloom. This usually occurs in April and there are two weeks of festivities full of different events.

A lot of new development has been underway in Southwest DC in the past decade. The much awaited National Park stadium opened in 2008 in the Southeast quadrant, just a short walk away. 4th St. SW was opened last year and the old mall, as well as the Safeway has been demolished. A local supermarket, Safeway was demolished and rebuilt from scratch, with a Starbucks inside. And much more development is anticipated, particularly with “The Wharf”, which is the name of the development that will cost over $2 billion. Maine Avenue is being redeveloped with residential, retail, and office space. Public housing is being replaced with a mixed income community.

Getting to Southwest DC is a piece of cake either by public transportation or by car. If you’re going by metro, just take the green line to Waterfront-SEU. If you prefer the bus, take the Circulator which drops you off right at the waterfront. If going by car, use Southeast/Southwest Freeway on Interstate 395 and take the Maine Ave SW exit. 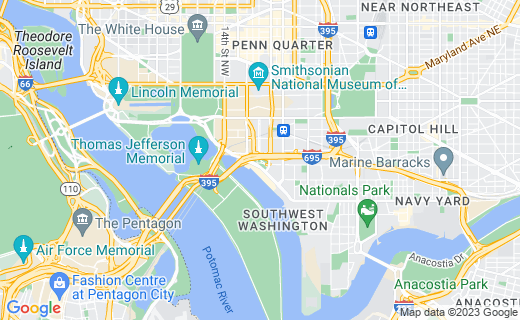 Comments on things to do in SW DC