To visit the heart of Atlantis is to visit Davy Jones' Locker. Not a comforting thought, that. In the Locker, it stays cold with a bone-crushing three kilometers of ocean above you. But cheer up. You don't even have to get wet.

The closest location to the secrets of Atlantis used to be part of Atlantis, if we can believe the story of Plato's dialog, Timaeus, written nearly 2,400 years ago. I'm talking about the Azores archipelago. 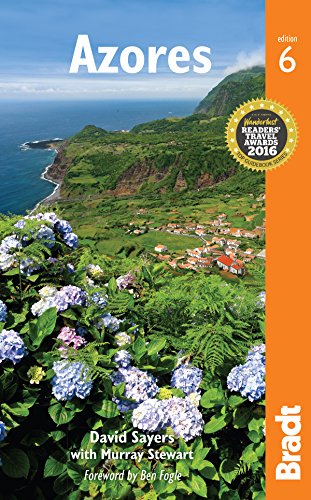 History remains uncertain which intrepid explorer discovered the islands for Portugal. Sometime between 1340 and 1431, the first Portuguese sailors set foot on at least one of these islands, planting the figurative flag for the small, European nation.

How ironic that the Azores stand nearly halfway to America. The distance between the islands and Newfoundland, Canada is not much more than that between the islands and Lisbon, Portugal. One of those intrepid travelers could have had North America as early as 1350 — 140 years before Columbus. And Portuguese might have become the new lingua franca of planet Earth, instead of English.

The Azores have a mild but somewhat humid climate. The islands are rather sparsely populated, maintaining mostly rural settings. In fact, the largest city (Ponta Delgada, on São Miguel Island) claims only about 46,000 inhabitants. This is the capital of the Azores Autonomous Region and home to the largest airport. From here you can reach the rest of the islands.

These Roman Catholics love their festivals. From May through September feasts and parades spice things up. For your attendance, be prepared to receive bread and soup to keep your stomach happy. Bullfights plus running of the bulls in the streets can give you pulse-pounding excitement. Other activities include whale watching, golf, amateur and sport fishing, surfing, windsurfing, yachting, rowing and sailing. Or you can merely relax on the beach or enjoy the scenery.

Musts for the Atlantis Library

Quest for Atlantis II
This book is by one of the good guys. I know this guy and he's a dedicated scientist, collecting scientific fact that may relate to Plato's Atlantis. Don't let science be run by ridicule and innuendo. That almost destroyed North American anthropology with its "Clovis first" dogma.
Buy Now

Were the Azores once mountaintops towering above the large island of Atlantis? The archipelago straddles the Mid-Atlantic Ridge, while most of the islands stand atop the Azores underwater plateau. Some Atlantic, ocean-bottom evidence includes subaerial phenomena and beach-like terraces — hints that some of Davy Jones' Locker at one time may have seen the light of day.

The Greek philosopher, Plato, wrote about Atlantis, saying more than once that the story was a true one. Can we believe him on that point? Many have their doubts. In scientific circles, Atlantis seems to have become the secular equivalent of "blasphemy." Scientists have said similar things about a number of other myths now known to have been based on real people, places and events — Troy, Mycenaean Greece, Minoan Crete, Amazon warriors and the real island of Ithaca. So much for the opinions of scientists. Myth is not their best subject. They seem to be batting close to zero.

Plato wrote that Atlantis harbored a powerful, but greedy empire. Approximately 9600 BC, Atlantis was swallowed by the sea. We have three pieces of scientific evidence which prove an Atlantis-like event occurred about 9620 BC — a veritable match for Plato's date. Something abruptly changed climate worldwide about 9620 BC. A moderately large volcanic event left traces on the Greenland ice sheet at 9620.77 BC. And a two-meter drop in sea levels worldwide occurred at the end of the Younger Dryas "Big Freeze" (~9620 BC).

Was Atlantis a real place? We don't know, yet. Where would we look to find proof? My best guess would be about 200 kilometers south of Terceira Island. Perhaps if James Cameron gets tired of making movies and hungers for a bit more underwater adventure, he could turn his cameras on this new location — 3 kilometers down. That should be easy, because the Titanic wreck stands at 4 kilometers down and Mr. Cameron's cameras reached that wreck without significant problems. If he shows up while you're visiting the Azores, see if you can hitch a ride.

With an estimated 11-12 on the earthquake scale, what would be left of that once proud civilization — if it ever existed at all? How much silt would remain on top of it? Would any of that former realm stand covered by lava from the Azores volcanic field?

If nothing of an ancient civilization is ever found down there, it likely will not dent the enthusiasm people have for the Atlantis myth. But if artifacts and written records are ever discovered, then the history of humanity will have gained a new island, separated from the current history by a gulf wider than the longevity of this current history. The contrast between the sleepy, quaint Azores above and the tragic and ancient myth below would be one to write home about. "Dear Ma and Pa, Made a new discovery today. Wish you were here."

Why the Philippines Will Not be the Next Atlantis

To understand how something like Atlantis could happen, please watch this video comparing the Philippines with the Azores region.

The following hybrid map of the Azores centers in on 7 of the 9 archipelago islands. Two more islands are up and to the left. 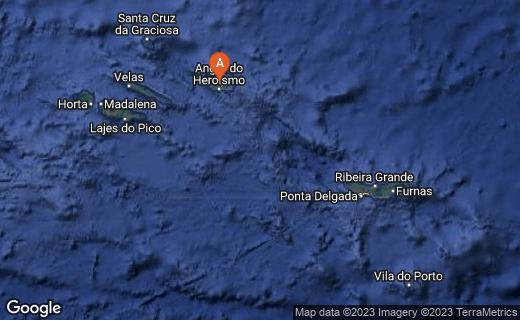 One of the Azores Islands and possibly the heart of Atlantis.