Top 10 Best of New Orleans in the Fifties

Growing Up in 1950s New Orleans

I grew up in New Orleans, Louisiana in the 1950s and it was like a different world from the New Orleans of today. There was an almost magical quality to the city. Just think about it. We had Audubon Park, Pontchartrain Beach, Mardi Gras, Canal Street, the French Quarter and the Tulane Sugar Bowl Stadium. And you could get to all of them for only 7 cents and a transfer on the Streetcar. There were dances every Thursday through Saturday night and the music from the local artists was the best. If you wanted to breathe fresh air or do some fishing, the north shore of Lake Pontchartrain and the Mississippi Gulf Coast were only a short drive away.

I can't think of a better place to live during that time. Here are some recollections about my top 10 most favorite places and events of New Orleans in the 1950s.

Routine visits to the Audubon Park Zoo were always one my Mom's favorite excursions. We would feed the animals and learned the names of each. She took all of us to the park in the afternoons and on weekends and outdoor activities were practically a daily occurrence.

I knew every inch of the park, from the fountain on St. Charles Ave. to the hatcheries behind Monkey Hill. When I enrolled at St. Francis of Assisi, each day I rode through the park to State street. After school, I would stop in the park to play. By then I knew everyone who worked in the park and would help throw fish to the seals and help feed the barnyard animals in the zoo.

As I got older, during the summer, we began spending a lot of time at the Audubon Park Pool (25 cents or a turtle from the lagoon sold to Ott's Pet Shop). Girls would take the bus from all over New Orleans to swim in the largest public pool in the South. After swimming we'd go to the concession stand across from the pool, eat, play the jute box and dance.

The jingle, "At the beach, at the beach, at the Pontchartrain Beach" always runs through my mind when I reminisce about all the good times I had there. It was an amusement park, right on the shores of Lake Pontchartrain. There was also a picnic area at the Old Beach, where we could swim and play my portable record player and dance. Pontchartrain Beach would sponsor WTIX and WNOE nights at the beach. This is where Mike and I first saw Elvis in person in 1956, as well as meeting Bob Denver (Maynard G. Krebs) and Michael Landon (little Joe Cartwright).

The Fun Houseboat ride was a great place to take a date because it was dark and they would get scared and cling to you.

Mardi Gras was unbelievable during those years. Every year the family's Mardi Gras headquarters was Grandpa Candilora's beauty salon in the Legerende Building on Barrone St., just across from the old Roosevelt Hotel and half a block from the Canal Street parades. Mom would always cook lots of delicious food that we enjoyed between the parades. She loved to laugh and celebrate before Lent, but always took the family to get ashes at mass on Wednesday.

Mardi Gras Ornaments for the Tree

Christmas and Mardi Gras are my two favorite holidays. There are many New Orleanians who like to combine the two holidays by decorating the Christmas tree with purple, green and gold garlands and ornaments. These trees are often left up through Mardi Gras.

Here are some by Lalagniappe, that we created for the season.

Before the malls, Canal Street was the mecca of shopping in New Orleans. All the best stores were there and their windows were decked out for every holiday, but especially for Christmas. Masion Blanche usually had the most elaborate Christmas displays with animated figures and of course, Mr. Bingle. The Roosevelt Hotel was also located downtown and still makes its lobby a winter wonderland each holiday season.

Ain't Dere No More - Benny Grunch and the Bunch

Unfortunately, most of the stores that shoppers of the 1950s frequented on Canal Street have closed or moved to the malls in the suburbs. Benny Grunch and the bunch created this hilarious song about the problem.

The Dances and the Music As a teenager, I continued meeting my friends in the park after school and we started going to the Sacred Heart (Saturday nights) and St. Anthony dances (Sunday nights). In addition, there was Germania Hall, Metairie Lodge, the Swamp Room, the Anchor Inn, La Casa's, and Rockery's. Dancing and music was a major part of my teenage life and I continue to enjoy it today. The music back then was all about love and most of it made you want to dance to the beat.

The French Quarter always called to young men in search of adventure and I was no exception. In June, just before our freshmen year, I slept over at my friend, Alvaro's, house. After his mother went to sleep, Alvaro snuck her car keys out of her purse, and we pushed her Ford down Constance to State Street then drove down Magazine to the French Quarter to see what all the older guys were talking about.

We parked on Canal Street and had only walked two blocks down Bourbon St., peeking in the doors and laughing like the 14 year olds we were. I imagine we were sticking out like sore thumbs when two juvenile detectives drove by (Bourbon St. was open to traffic then). They yelled to us and as we looked, before we knew what happened, the car doors flew open and they grabbed us by the arms and asked what we were doing down here at this time and where were our parents. We pretended to be older, but I guess our Elvis hair styles weren't enough.

Before long we were at a pay phone and the detective was asking Dad where his son Al was. He told them I was sleeping at a friend's house and gave him the phone number. The detective told Dad that someone wanted to talk to him. He then handed me the phone and instructed me to tell my Dad where I was. If I ever hated doing something - that was it.

The G-Men drove us back to Alvaro's house after asking Dad to call her then meet them there. Boy, she really let us have it. Then Dad arrived, they huddled and the G-Men left. While he drove Alvaro's mother to her car on Canal St., they discussed the severity of our fates. After all was said and done, I was grounded for six months, starting in mid-June and Alvaro was sent to boarding school.

For only 7 cents and a transfer, the New Orleans streetcar was our ticket to anywhere in the city. You could pick up a date and take them to the show long before you had your drivers license. The street car went to all the popular haunts like Canal Street, Audubon Park and Pontchartrain Beach.

Summer Trips Across the Lake & to the Gulf Coast

Mom holding a snake on the Mississippi Gulf Coast by Al Bordelon, All Rights Reserved

I always looked forward to trips across the lake and to the Mississippi Gulf Coast. When we would get to the north shore of Lake Pontchartrain, Mom would always make us take a deep breath so that we could smell the Pines. She loved to go to Fontainbleau State Park and Zemurray Gardens. Fountainbleau was a wonderland for me. There were so many animals to see and little snakes and lizards to catch. When Grandma would come with us, she would make me empty my pockets before I was allowed to get into the car for the drive home.

During the summer, we would rent a house in Waveland, Mississippi. The owner of the house left his pig and chicken there and we would feed and care for them. We'd often walk to the local picture show and would find the pig and chicken curled up together on the front porch, waiting for our return. They were friends.

Fishing in the Gulf of Mexico

We all loved to fish and explore the Gulf Coast, especially me. On a fishing trip to shell beach, I caught a ribbon snake. After a little coaxing, I finally got Mom to pet and then hold her first snake. Mom was as brave, if not braver than anyone in our family.

My Dad really enjoyed fishing in the Gulf of Mexico and he would take me and my brothers to many spots on the coast. Today I still enjoy fishing and like to go out to the rigs where the big ones are.

We didn't live far from Tulane Stadium, where they used to play the annual Sugar Bowl football game before the Super Dome was built. My friends and I would always wait until half time, when they would let you in for free. As kids, we saw many exciting games from some of the best seats in the stadium.

If you can't go to New Orleans or if you have been there and want to remember the sights and sound then these books are for you. 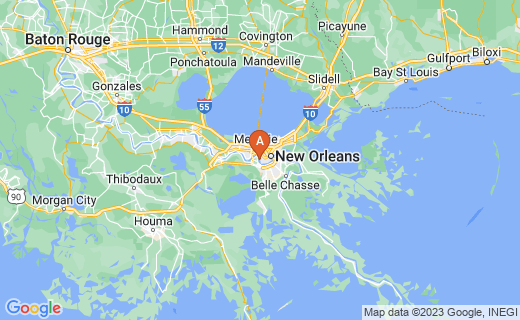 This Top Ten Best of New Orleans in the Fifties was written by my husband, Al aka rio1. Though Al is no longer with us, he will be remembered by his wonderful stories of New Orleans, the way it used to be.

Don't go before you tell us about your Mama an' dem