ScribblingGeek earned a bachelor's degree in communication studies in 1999. His interests include history, traveling, and mythology.

Part 2 of my feature on nights in Singapore. If you haven't, please check out part one for more night time photographs of this modern city.

Sir Thomas Stamford Raffles of the British East India Company founded modern Singapore in 1819. Today, his last name represents the best of Singapore, be it hotels, schools or even beers. A statue honoring him stands beside the Singapore River, appropriately backed by the financial skyscrapers of Singapore. If you are venturing to him, do check your maps before going. He is at the end of an alley and could be a little hard to locate.

Singapore is a relatively young city. Despite that, it still has a turbulent history, transiting from British crown colony to an occupied trophy of Imperial Japan, before transformation into a sovereign city-state. For visitors curious about Singapore's journey to nationhood, the National Museum of Singapore at Stamford Road is a must-visit. Completely restored in 2006, the museum features many colorful, state-of-the-art interactive displays. Come sundown, the historical building is also atmospherically lit up, making it a lovely subject for evening photography.

You'd encounter this venerable structure when visiting Singapore's Chinatown area. It looks decisively dated and is incongruous with the rest of Singapore's sleek new buildings, but in its heyday, People's Park Complex was a symbol of progress for the country. Not only was it the first shopping center of its kind in Southeast Asia, it established the direction for future retail development in the country. Nowadays, it remains a popular retail spot, particularly with mainland Chinese migrant workers. It is also where tourists head to for air conditioning, after a sweaty stroll in the crowded streets of Chinatown.

Gardens by the Bay, Cloud and Flower Domes

I mentioned Gardens by the Bay in part one and showcased its iconic Super Trees. The trees are hardly the only attraction in this expansive park, there's also the ultra-modern Cloud Dome and Flower Dome. These are conservatories housing a myriad of plants, with regular exhibitions such as tulips from the Netherlands or Sakuras from Japan. At night, they grace the seafront of Singapore like two shiny clams. Eye-catching, modernistic installations not to be missed. And again, perfect for night photography enthusiasts.

A lot of changes happened in and around the southern tip of Singapore in recent years. Among the many new buildings constructed, the ArtScience Museum is undoubtedly the most unique and eye-catching. Designed by renowned architect Moshe Safdie, its shape brings to mind the graceful curves of lotuses, or that of a gentle cupping hand, depending on how you look at it. The ArtScience Museum regularly features touring exhibitions curated by other museums and is part of the Marina Bay Sands Integrated Resort. If visiting, remember to check out the package tickets, some of which might also include Gardens by the Bay.

The only structures more eye-catching than the unusual ArtScience Museum at Marina Bay are the immense triple towers of Marina Bay Sands Integrated Resort. There are many nicknames, at least locally, for these ultra-modern skyscrapers, particularly its cantilever "SkyPark." None would prepare you for their grandeur, though, especially when the whole resort comes alive during nightly laser shows. The SkyPark itself could be visited for fine dining, a swim in its infinity pool (you need to be a resort guest), or simply to behold modern Singapore from high up. Raffles himself would be much thrilled by this view in the sky. Did he ever imagine the "kampung" he landed at, would transform into such a metropolis? I do wonder.

I end this feature on nights in Singapore with a picture from the 2013 Singaporean National Day Parade celebrations. Each year on August 9th, the country celebrates its independence and sovereignty with an extravaganza of lights and fireworks. Tickets for the yearly parade are difficult, if not impossible, for tourists to obtain. However, be around the Marina Reservoir area where the celebration is usually held, and you stand a good chance of seeing the fireworks. With the Singapore Skyline glowing in the background, this might just be the best night photography opportunity of the year. Something definitely not to be missed, if you are visiting Singapore in August.

Statue of Raffles, Marked by "Raffles Landing Site" In the Map. Zoom in to View. 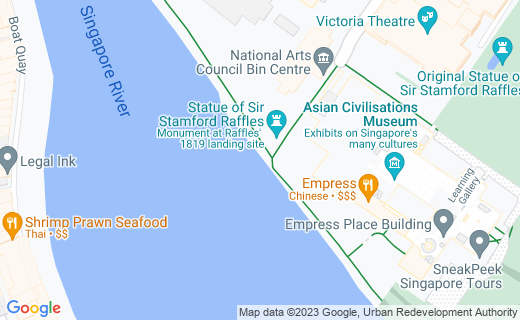 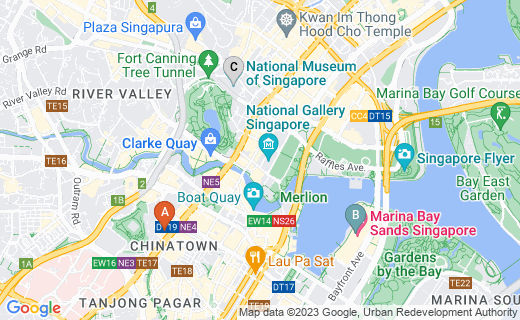 Do You Want to Visit Singapore?