Transport Yourself Back to Railroad Times in Bend, Oregon

Trains have long held a romantic allure for Americans. Although they are no longer a significant means of public transportation here in the U.S.A., many historic train stations continue to draw visitors that want to learn about railroads, the history of their construction, and the impact of the Industrial Revolution that helped us travel from coast to coast.

You can get a taste of history at the Oregon Trunk Railroad Depot in Bend, Oregon. The City of Bend was established over 100 years ago in 1904 as a timber/mill town. A railway was extended to Bend from the north just a few years later in 1911. For nearly two decades, Bend was the end of the line. Then, in 1928, the Great Northern Railway finally stretched up from California, north to Bend, in Central Oregon.

The train passenger station that stands near historic downtown Bend is one of the testaments to the so-called "last great railroad war." According to the Deschutes County Historical Society:

The war was a battle between two of the most powerful railroad men of the time, James H. Hill of the Great Northern Railroad and Edward H. Harriman of the Union Pacific. The two companies battled up the Deschutes River canyon, constructing tracks on either side of the river. The first to reach the newly created town of Bend would have control over what was regarded as the largest remaining portion of the United States not served by a railroad. Eventually Hill would win the fight and the Bend Railroad station would serve as the terminus of the Oregon Trunk Line. The completion of the railroad was the key that connected Central Oregon's resources to the rest of the country.

The Oregon Trunk Railroad Depot is a testament to the design and architecture of the early 20th century. When it was built nearly 100 years ago, The Bend Commercial Club decided to spend an extra $300 to construct the station with tuff stone from local quarries, rather than wood. Not only would the construction materials help the passenger depot stand out from other train stations in the state, but they hoped the structure would be a permanent landmark of the City.

The historic railroad station is a standard passenger depot that is representative of architecture of the period. Local historians have declared the Oregon Trunk Railroad Depot as "an excellent example from the railroad era and the associated events and settlement of the period." The architects that designed the Oregon Trunk Railroad Depot desired to build a significant structure that would put Bend, Oregon on the map. The contractors endeavored to make the Bend station the best in the state of Oregon!

Visit the historic passenger train station in Bend, Oregon and you might think the building is rather nondescript. It is a single-story, rectangular building built of cut stone. But look more closely, and you'll see elements that historians associate with classic, small town railroad stations: overhanging eaves, exposed rafters and beams, a porte cochere and a central telegrapher's bay. In fact, there is an official description of its architectural style: Mission and Romanesque.

Other design elements of the Bend passenger train depot set it aside from buildings of its era. The local newspaper reported that the waiting room floor was constructed with chipped marble, polished to a high gloss. The rafters in the open roof design were stained dark mahogany and varnished to shine. Even the office floor included the best fir wood available at the time. Telephone and telegraph wires to the building were undergrounded, so as to improve the exterior appearance of the building.

Architectural historian, Rosalind Keeney, reports that the historic train station in Bend is one of only 4 examples throughout Oregon's passenger railroad stations with this unique combination of masonry and the porte cochere design (others include the Oregon Trunk Station in Redmond, and Southern Pacific stations in Corvallis and Albany). In fact, the Bend depot is so noteworthy that it is featured in the book,

Changes to the Historic Train Station in Bend, Oregon Over the Years

Interior remodeling starting in 1942, significantly transformed the building from its original design. First, a drop ceiling was added to hide exposed beams. Several years later, another drop ceiling was installed so that forced air heating could be added. By 1958, passenger train service to and from Bend ended. The rooms were transformed to office space and many of the windows were covered.

But the most significant change to the historic train station in Bend was the change of its physical location. In 1991, Oregon Department of Transportation notified the building's owners that a new truck bypass was planned to be constructed right through the site. A task force to preserve the Oregon Trunk Railroad Depot was established, and a number of proposals concerning locations to which the building could be moved were considered.

The original plan was to move the train station to the City of Prineville where it could be used as the final stop for the Crooked River Dinner Train. But Prineville eventually began questioning the cost of moving the historic building, which would have exceeded $1 million. Even with $300,000 from Oregon Department of Transportation, the price was a bit steep!

In 1998, the bidding was opened again. ODOT's offer of $300,000 remained firm. After considering six additional proposals, the contract for ownership was awarded to River Bend Limited Partnership. The historic passenger depot was moved to its current location on the west side of the Deschutes River, on Shevlin-Hixon Drive, near a preserved set of railroad tracks.

The historic train station is located at 313 Shevlin-Hixon Drive, just behind the Les Schwab Amphitheater in the Old Mill District in Bend, Oregon. Its less than 1/4 mile from the west bank of the Deschutes River. Popular running and walking trails take you right past the old railroad depot.

The sidewalk running west to east to the railroad depot follows a segment, about 1 block long, of railroad tracks. Replica wooden sidewalks are maintained just to the east of the historic building. Recently, a replica railroad scale was built near the Oregon Trunk Railroad Depot, and painted bright yellow (see photos above).

While you can go inside the historic train station, a local non-profit organization, Arts Central, has established its "Art Station" inside the building. Children and adults can sign up for art classes including drawing, painting, sculpture and ceramics. Professional art educators lead the classes. Art Station is also the headquarters for the Artists in Schools Residency Program (AIS) and VanGo.

I love visiting the historic train station in Bend in part because I love history. Also, I long for the days when we could hop on a train and just relax and enjoy the scenery on a trip. Not only are passenger trains a dying tradition in the United States, but Central Oregon still has no passenger train service to and from the region.

Over 50 years since the Oregon Trunk Railroad Depot welcomed its last passenger, we are relegated to driving or flying if we want to take a trip.

Since we moved to Bend in 2006, I have often wondered if or when passenger train service would resume in the region. Until that day arrives (if ever), we'll just have to use our imaginations to consider what it must have been like for people arriving at the Oregon Trunk Railroad Depot in Bend, Oregon in the first half of the 20th century. 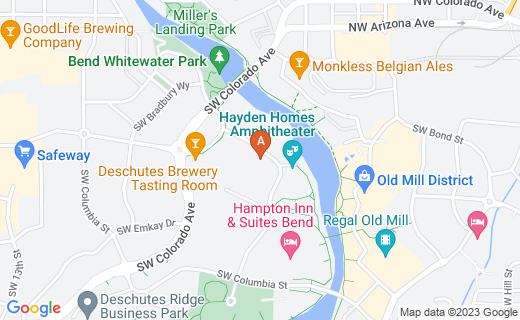