Till There Were None

It was a field biologist who first rang the bell. Tigers are not being seen...less tigresses! This was at Panna Tiger Reserve located in Chhatarpur and Panna District of Madhya Pradesh. The forests constitute catchment area of Ken River.

Declared as the best National Park in the year 2007, tiger population was down to zero by 2009. Tigers were poached to become locally extinction. This was done by organized gangs with collusion of forest staff.

All the euphoria about the secure status of the big cats had already died down after the mayhem at Sariska, and now Panna experienced it as well. The reserves had lost their tigers to poachers, 32 in Sariska, and 40 in the latter.

A large scale survey of big cats was carried out only to confirm that there were none. The park had lost panthera tigris tigris species completely in a span of few years. A fantastic gene pool became extinct forever and with it died all the conservation ethos that the Project Tiger Program promised. The tourism industry died a slow suffocating death with enormous investment to lose. With reduction in tourism many jobs were lost, the locals were the worst sufferers.

The park in Northern Madhya Pradesh is a biodiversity hub. The forest comprise of broad leafed teak and mixed dry deciduous types. Panna National Park became a tiger reserve in the year 1994 and came under aegis of Project Tiger Program.

Home to many charismatic mammals, the reserve came into fame due to tiger poaching that took place in a span of ten years or so. Panna park is home to tigers, leopards, sambar, sloth bear, Nilgai, spotted deer, barking, deer, four horned deer and wild boar. The wild dog is often seen while langurs and peacocks are fairly common.

Ken River Sanctuary lies next to the park and intersects it at many places. The sanctuary is home to marsh crocodiles, gharial and many species of turtles. Near to park are the World famed Khajuraho temples which could be visited whence staying at Panna Tiger Reserve.

Do you think CBI inquiry should have taken place?

Investigations: How tigers where poached?

Tigers at Panna were either snared, shot or poisoned by the local hunting community called Pardhis along with the involvement of criminals located elsewhere. The nexus ranged right up till New Delhi pointing fingers at Sansar Chand and company. Sansar Chand was a notorious criminal involved in large scale poaching and trading of banned animal parts in India.

An investigating team was formed which discovered collusion between some forest officials and poachers. There were instances of tiger poaching whence cases were not registered by the forest department. The report directly indicts officers of two ranges for willful negligence and possible involvement.

There was no CBI ( Central Bureau of Investigation) inquiry constituted by the State then. This would have resulted in complete investigation and involvement of high officials if any. Investigation report by a high official was also not well received by the Chief Wildlife Warden then. He pointed out many lacuna in investigations and the technique used. The investigating team made original seizures of evidence. As per newspaper reports there was an incident of poaching whence the persons were also named but no case was registered - possibly after a graft.

In the year 2007 an encounter took place with a large vehicle parked inside with lights on. The occupants escaped leaving guns and signs of blood. This incidence was never properly investigated and the vehicle belonging to a relative of powerful minister was eventually released without conducting any tests.

Many evidences were also seized from the range offices inside the tiger reserve by the investigating team. More persons were implicated by the report but no action was taken till the publication of the newspaper accounts.

As per suggestion SIT (Special Investigation Team) was constituted by the MOEF (Ministry of Environment & Forest). But this body set up by the State Government put the blame on gender imbalance, migration and what not. The then Forest Minster of Madhya Pradesh State was also in favor of CBI inquiry but no such decision was made.

In the muddle of status of big cats in Panna - which by all means was farcical - a need for female was accessed. It was assumed that for few male tigers in the park there was no female left. By the time females were trans-located, the management realized the complete absence of males as well.

Subsequently more tigers were brought from other National Parks of Madhya Pradesh. This happened in post 2009 era after the park was officially declared tiger less. Today more than 14 tigers survive in the park with a good record of breeding. The number includes cubs as well. The successful adaptation to absolutely new habitat has been a big conservation success. The big cats are of migratory nature hence adopt to strange environment quickly . The success also augurs a better future for the animals since they could be sent to areas with scant or no population from destinations which are over populated.

Satna is the nearest rail head at a distance of ninety kms. The rail route is on Kolkata to Mumbai track. Panna is well connected by bus service with many towns in Madhya Pradesh.

Tigers at Panna are breeding well after the reintroduction program in the year 2009. But sadly a tigress died few days back due to infection from the radio collar. There are more than fourteen tigers in the park now. 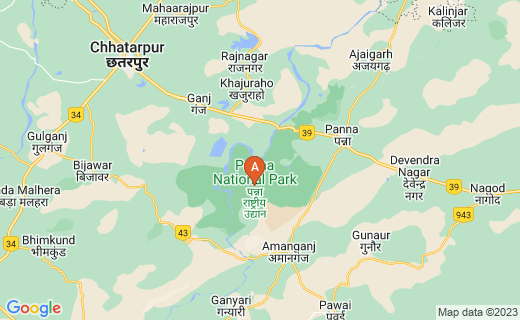